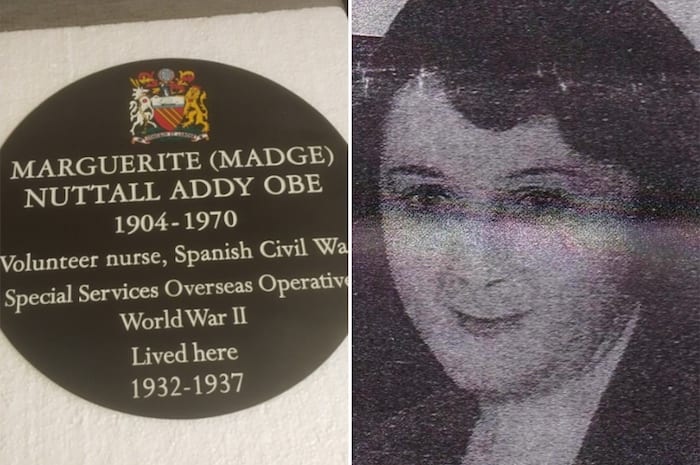 From qualifying as a nurse and working in a Chorlton hairdressing shop, to operating as a spy for the British secret service right under the noses of the Germans, Marguerite Nuttall Addy (Madge to her friends) had quite an incredible life.

Born in 1904 to a working-class family in Rusholme, she married three times throughout her lifetime, at a time when to remarry was most certainly not the done thing.

Not content with living the comfortable, temperate life expected of women of her generation and class, she blazed her own trail and in turn paved the way for other women to follow.

As a young woman, she worked in a hairdressing shop in Chorlton and went on to live above it after having qualified as a nurse. The premises is still a hairdressers today and, since 2018, has borne a plaque in her honour that nods to her remarkable story.

Come 1937, just seven years after marrying her first husband Arthur W Lightfoot, she volunteered to work with the Brigadas Internacionales (a mixed band of military units formed by international volunteers) who were helping to fight fascism during the Spanish Civil War.

The organisation lasted for just two years and, after disbanding in 1938, Madge found herself in the position of head nurse in a monastery near Ucles in Castle where she helped many sick and injured casualties of the war.

One of the last to leave the hospital at the civil war’s end in 1939, she was captured and imprisoned by Franco’s forces. Having been rounded up as a ‘foreigner’ and imprisoned, Madge was eventually allowed to leave following an appeal on her behalf by the British government.

On her return to the UK, she divorced her first husband and married again – this time to Norwegian businessman Wilhelm Holst, whom she had met while working at the monastery.

The pair moved to Paris and, whilst there, were recruited by the British secret service.

The joined the Special Operations Executive – an amalgamation of three existing secret organisations formed under Minister of Economic Warfare Hugh Dalton in 1940 – and, when the Germans broke through in 1940, made their way south to Marseilles.

Here Madge, now Mrs Holst, helped to organise escape routes from France to Spain for various Allied soldiers, escaped prisoners of war and airmen. She also helped to hide agents and resistance fighters, bringing them food and fake identity papers to aid them in their flight from France.

Travelling as a Norwegian citizen, she flew by German aircraft to neutral Portugal to deliver valuable and secret information, which she concealed in the lining of her coat.

During one visit to Lisbon, she was taught how to use secret ink to communicate and began to use it to send regular updates on the escape organisation via post.

As an English woman operating in enemy-occupied territory, she faced torture and a firing squad if she were to be caught but carried on regardless – and it was largely thanks to her that several hundred escapers from Dunkirk were able to return home.

During the second world war, the number of women working in the secret service far outstripped their male colleagues with a ratio of around twelve women to every five men.  Yet they were “near universally” restricted to subordinate roles, according to a paper on the subject by academics Rosemary Florence Toy and Christopher Smith.

In light of this, Mrs Holst seems even more remarkable in undertaking such dangerous and important work at a time when the agency’s attitude to gender was by all accounts still quite sexist.

She was appointed Officer of the Order of the British Empire (OBE) in January 1946 in recognition of her bravery and patriotic service.

After the war, she married again, this time to Thorkil A. D. Hansen, a fellow secret agent she had met.

They were wed in London in 1955 and she lived out the rest of her days quietly as a suburban housewife, never seeking out any publicity or trying to make money from her story.

Outliving Hansen, she passed away in Hendon, Barnet in 1970 without any public obituary or further official recognition until a plaque was unveiled in her honour on Manchester Road in Chorlton, 2018.

Imprisoned by Franco, recruited by the secret service and married three times in her life, she had certainly come a long way from the Chorlton hairdressing shop. A truly inspiring Manchester woman.