Manchester raves in the sunshine at Hacienda Classical at Castlefield Bowl

It was a night to relive the glory days of the Haçienda – when Manchester really was the clubbing capital of the world.

Haçienda Classical returned to Castlefield Bowl on Saturday night for a proper Manc love-in, with a split of generations ready to get their rave on. There were pure festival vibes in the bowl – with bucket hats, sunnies on in the dark and glitter and gemstones galore.

Most people were old enough to remember the Hac’s early days, likely seeking to relieve their misspent youth for a night and looking to throw some shapes to their favorite tunes. But the younger crowd were present too, albeit in smaller numbers, hoping to experience a taste of old school Manchester musical magic first hand.

Now in its 4th year, the event is one of the highlights of Manchester’s musical calendar. It’s been 22 years since the club closed down and 17 since it was demolished, but, if last night proved anything, it’s that the spirit of the club – and what it represented to a generation – is still alive and well.

As the sun shone on Castlefield, revellers were transported back in time with DJ sets from Herbie Saccani and the ex-Hac owner and all-around Manchester musical hero that is Peter Hook.

Dropping hit after hit from the Haçienda’s heydays, they effortlessly warmed the crowd up for what was coming next: a live set from Detroit techno outfit Inner City.

Lead singer Shanna Jackson didn’t hold back: strutting her stuff in a hot pink lycra co-ord and bringing down the house with her killer delivery and stage presence. When they drop Good Life – the feel-good hit of a generation – the crowd go absolutely mad for it, belting out every word.

Next up to the decks with a record bag full of Hac classics is Mark XTC – a man who has been a huge driving force behind shaping the north’s underground dance music scene, best known for co-founding DA INTALEX partnership with Marcus Kaye. And he doesn’t disappoint, dropping a fistful of classic hits and teasing in a few new underground tunes too.

As the sun goes down, the 70-piece Manchester Camerata orchestra appears on stage to a round of riotous applause from the loved-up crowd.

From the moment they hit the stage, it’s tune after tune after tune, bringing the Haçienda back to life with their on-point classical compositions. As Snap!’s Rhythm Is A Dancer hits, the MC demands hands in the air and the crowd dutifully oblige. Everyone’s here to have a good time, no messing about.

Click or swipe below for a gallery of photos from the gig:-

But then, Manchester Camerata plays the seminal house tune that is Strings of Life by Rhythim is Rhythim – and it’s pure magic. If a house tune was ever made to be played by an orchestra, this is surely it.

Gearing up for the encore to end all encores, they’re dropping anthem after anthem – playing everything from Xpansions’ Move Your Body to Strike’s U Sure Do. 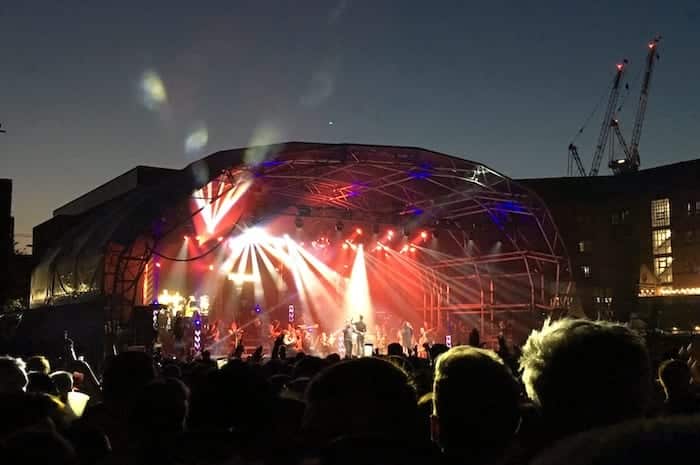 And then they disappear from the stage, returning to rapturous applause. A passing tram, as if intentionally, pauses above us on the bridge and sits there for a few minutes or so, waiting for the orchestra to pick up the pace again.

With gusto, the orchestra launches into N-Joi’s Anthem before transitioning seamlessly into Free by Ultra Nate. By now, we’re all belting out the lyrics at the top of our lungs – caught up in the feel-good factor created by thousands of like-minded ravers doing the exact same thing with huge smiles on their faces.

The show finishes on a high with a lung-busting rendition of You’ve Got The Love and then, all too soon, it’s all over.

There might be an after-party at Gorilla and an all-nighter taking place over at Bowlers for Sankeys last hurrah, but we get the distinct feeling that the majority of the crowd are spent.

As we trudge out towards Barca, it seems from snatches of overheard conversations that everyone is looking forward to warm afterparties in familiar living rooms, where they can handpick the tune selection and continue the nostalgia trip on a high into the early hours.