We all love a con artist... 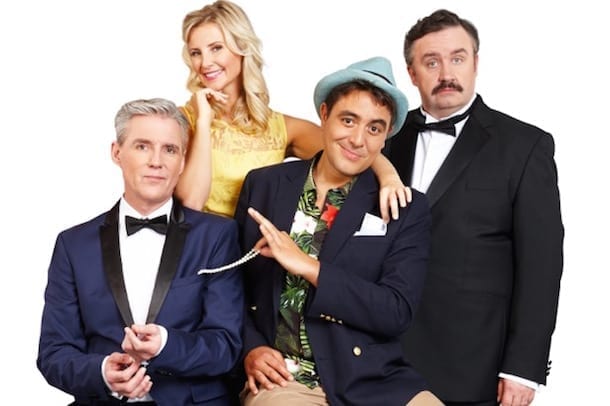 The joys of a con artist being double dealed!

We all love a con artist – just so long as we aren’t the one being duped.

The action is set on the French Riviera, where the decadent world of sophisticated and debonair English con man Lawrence Jameson (Michael Praed) masquerading as a disinherited prince seduces unattached ladies and persuades them to part with their cash. He has the local police chief in his pocket and all is going well, until a rival larger than life con man Freddy Benson (Noel Sullivan) arrives in town (looking like a young Joey from Friends) and threatens his lucrative patch. Both men are now equally determined to outwit each other as well as the mug punters (usually rich females in this case) unlucky enough to cross their paths.

The original highly acclaimed movie starring Michael Caine & Steve Martin from the book by Jeffrey Lane, hits the mark and has been gloriously brought to the stage in this highly entertaining, enjoyable production due in large part to the songs by David Yazbek which are largely a pastiche of a wide variety of styles ranging from Oklahoma hoedown to big power ballads and French chanson.

Most of the pleasure of the show depends on the relationship of this pair of con men, and there is a fizzing, almost telepathic on-stage chemistry between Praed’s suave and practised deceiver, combining charm and wit with just a hint of menace, and Sullivan’s Freddy Benson, a slovenly American likely lad chancer desperate to hit the big time league of con artists.

Michael Praed as Jameson is vanity personified and watching him do a soft-shoe shuffle and sing like Sinatra while elegantly tipping his hat is to witness a masterclass in theatrical style.

There is a hilarious scene in which Freddy Benson has a winner takes all $50,000 bet with Jameson on who can win the heart of Christine Colgate (superbly played by Carly Stenson) and then pretends to be paralysed to win the sympathy of the woman, only to be double crossed by Jameson’s suave deceiver, masquerading as the Austrian zany Dr Shuffhausen

What ensues is a superb cameo of the ‘doctor’ inflicting terrible pain on his rival on the grounds that he is completely numb from the waist down. The sight of Freddy desperately trying to conceal his suffering to the point where steam actually comes out of his ears is a moment of theatrical bliss.

However, one should not forget the supporting cast, especially the excellent Mark Benton as the bumbling French detective who adds an almost slapstick humour to the occasion and Geraldine Fitzgerald who plays a lonely aristocratic English woman looking for love. One scene on a balcony brings the house down and is a joy to behold.

Jerry Mitchell’s production has a super light feel and is neatly choreographed in this highly entertaining and slickly staged show, and anyone who buys a ticket certainly wont won’t feel conned!

The audience loved it, as did I, and it certainly lived up to all its West End hype. Don’t miss it!

Now playing at The Opera House 20th-30th May