Cottonopolis in The Northern Quarter. 8pm on a Friday night, I walked into a bustling place full of folk who had decided against a dry January and seemed a lot happier for it, says Laura Fell…

Wiggling my way into a crevice between 2 bar-hoggers – those annoying people who stand at the bar with their drinks preventing others from being served – I ordered a pint of Krusovice Tank Beer and a G&T and waited for a table to become available.

A former textile warehouse and Grade-II listed building on the edge of the Northern Quarter is where Cottonopolis calls home. It feels the perfect location for husband and wife, architect and design duo-turned restaurateurs, Nick and Hayley Muir, to set up their vision. Some original features such as the clog-marked floor remain, letting this Japanese inspired eatery pay homage to Manchester’s Industrial Revolution and rag trade past. 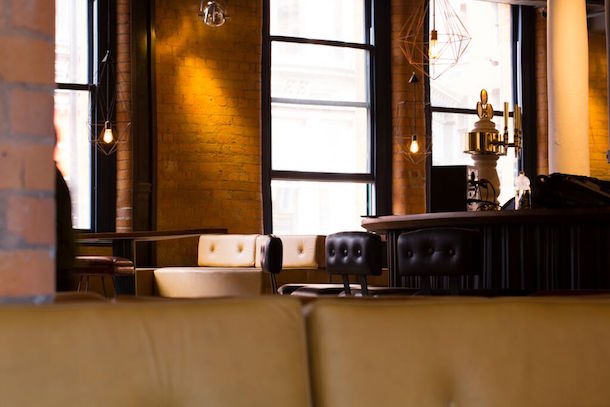 It seems fitting that the new venture was dubbed Cottonopolis – the nickname bestowed upon Manchester in the early 19th Century as a bustling metropolis and home of Britain’s cotton industry.

G&T downed, I started to familiarise myself with the Ice, Fire, Steam and Oil sections of the Japanese–inspired menu. All reasonably sized dishes, they’re priced anywhere between £5 and £9.50 and only two or three each are needed for an ample sized meal. 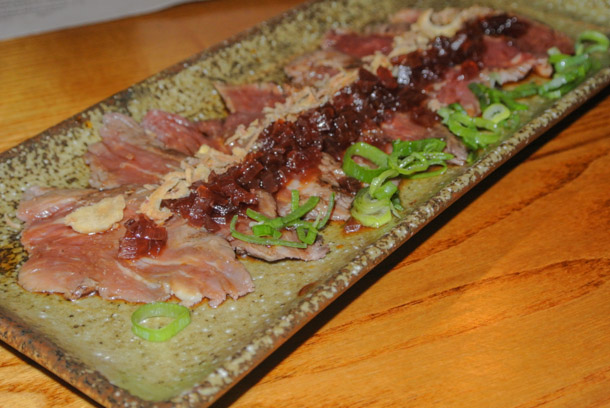 First up, Loch Duart Salmon Maki and Beef Tataki from the Ice section.

Sliced thinly with skilled precision, the beef is served cold with onion ponzu, spring onions and crispy shallots, and called out to me from the menu. A pan–Asian twist on the Italian Beef Carpaccio, it packed an incredible amount of flavour. The seared outer adding a contrasting texture with its coated edge and ensured a tender, melt-in-your-mouth extravaganza. The Salmon Maki, expertly presented on the plate, was also thoroughly enjoyable. 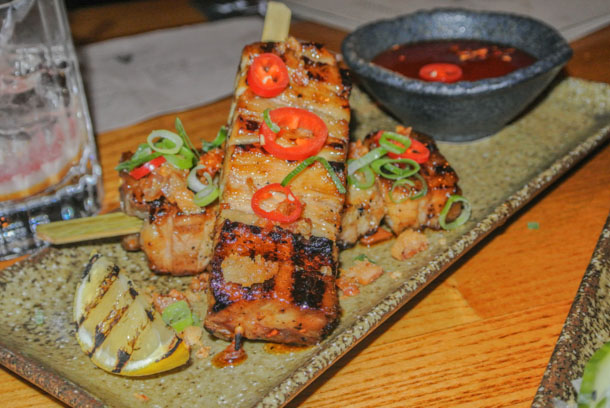 The Fire section served up some Pork Belly Yakatori – a fatty, delicious cut of meat, skewered and glazed with soy and mirin (a traditional Japanese rice wine) that fell to pieces at the slightest touch. The Blackened Mackerel was cured with treacle and blowtorched to create a crispy surface whilst leaving the tasty flesh succulent underneath. I was found picking at it with chopsticks until nothing remained.

On to Steam. Steamed Shumai (chicken dumplings) and Soft Shell Tempura Crab Bao Buns were next to take on the tastebuds. The light mushroom and essence of truffle in the generously-sized dumplings made a party in my dumpling-filled mouth and the steamed buns were not at all soggy but airy and light – unlike the disastrous fate of many a bao bun done wrong. Hindsight tells me I should have poured more of the brown crab mayo onto mine, but it was tasty all the same. 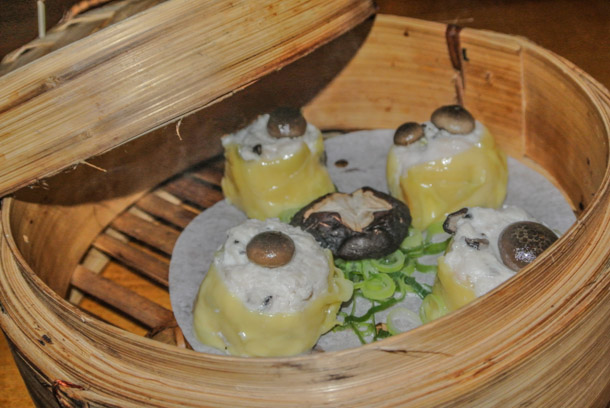 And it wasn’t over yet! The final plates sent our way were from the Oil section of the menu-lightly battered Wild Mushroom Tempura and outstanding Kara-age Chicken Wings with kimchi coleslaw. A tantalising taste sensation of deep fried and tender, juicy chicken wings in a delightful dust were a game changer on their own, but when paired with the kimchi coleslaw it left me aghast. 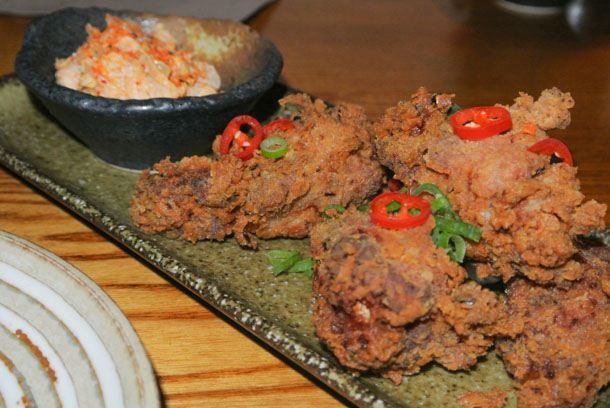 Finally, the miso–marinated tender cutlets of the Lamb Nasu ensured that I left with a smile on my face. Miso happy. (Pun shamefully intended!)

What Japanese meal would be complete without a small ‘ochoko’ of sparkling sake? Keeping to tradition, the sake was served in a masu and was sweet and fruity. I sipped with instant regret that I did not order the full bottle. 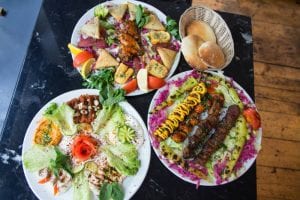 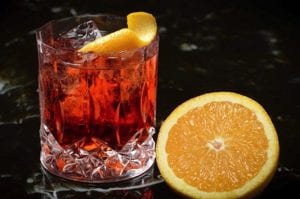