Review: Class of 92 Still Out Of Their League – The Further Adventures of the Famous Five 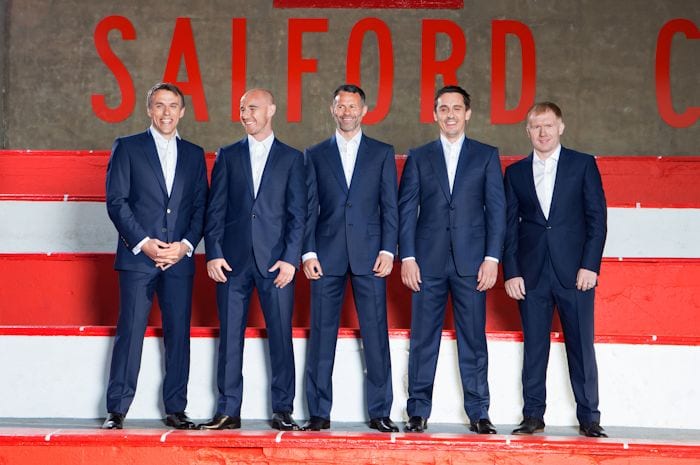 Class of 92 Out Of Their League follows the adventures of five retired professional footballers who take over Salford City, a non-league club. They achieved unrivalled success during their extraordinary playing careers and are accustomed to playing at the highest level where players don’t have to buy their own shampoo or share a towel in the showers after a match. But can they cut the mustard at a struggling club seven tiers down from the Premier League?

The club is run by volunteers and has a great community spirit but they don’t have two brass farthings to rub together, attendances are in double figures and, to put it bluntly, they are pretty crap. But some of the supporters aren’t happy. They resent the fact that the famous five aren’t short of a bob or two and want to invest in the club. They want the club to stay crap.

Class of 92 Out Of Their League is a cross between Roy of the Rovers and Coronation Street and features some great performances by the star studded cast – Gary (the unofficial leader), brother Phil (the fitness fanatic), Ryan (the serious one), Paul (the cheeky one), and Nicky (the invisible one).

In case you missed the first series or need a reminder about what happened, here are the highlights.

The lads change the club colours from orange to red and redesign the club badge. Babs needs a bigger kitchen, the clubhouse needs renovating, the toilets are a health hazard and Karen keeps changing her hair colour. Gareth is interviewed while he is sitting on the toilet. The lads realise they need more money so they allow Peter, a mysterious Singaporean businessman, to buy 50% of the club. The club has got a dodgy Sky box which alarms Gary who is a presenter on Sky Sports. The team gets off to a flying start and go seven games unbeaten but the wheels soon start falling off.

Gareth stops scoring, they drop to 4th and get knocked out of the FA Cup. The lads lose faith in Phil the coach and sack him. They appoint Bernard and Jonno, who aren’t just the most ruthless managers in the league but probably two of the scariest men in the world.  These are men who don’t pull their punches, metaphorically or literally.  They sack ten players and the ones who are left are so terrified they start playing well.

The team’s form improves and they go neck and neck with Darlington at the top of the table but need to win their seven remaining games to win the title. Gareth decides to take a week off to go to Germany for a modelling job. Bernard and Jonno aren’t happy so they drop him to the bench when he returns. They are drawing against Prescott Cables in a must-win match so they bring Gareth on with a few minutes left and he scores the winner.

The most hotly contested season in the league for years goes to the wire. Darlington must beat Warrington in the last game of the season to pip Salford to the title. The Salford players gather in a curry house and follow the game by text message. It ends 1-1. Salford are Evo-Stick First Division North champions and promoted to the Northern Premier League Premier Division for the first time in their history. Cue massive celebrations. It couldn’t have been more exciting if it was scripted. Or maybe it was. Oh, and Babs gets a posh new kitchen.

In last night’s programme, Class of 92-Still Out Of Their League, the first of two in the second series, it’s the start of the following season. Gary and Phil get jobs in Spain and Nicky is still nowhere to be seen, so it’s the managers and the volunteers who help run the club who are the stars of this programme.

Gareth is sidelined injured and buys a cheese shop. Bernard is getting married to Jemma, his fiancée.  Ryan takes us on a tour of his childhood haunts in Salford. The club goes on an FA Cup run. They beat Bradford and play Notts County in the first round proper – the furthest they’ve ever got in the competition. It’s the biggest game of their lives. The match is televised in front of a sell out crowd of 1,400 – that’s 1,353 more than they used to get before the Class of 92 took over. They win 2-0 and are through to the next round.

Babs’ kitchen gets a one star hygiene rating by Salford council. Gareth is interviewed while he is having a pee. He makes his comeback in the 82nd minute of the FA Cup second round replay against Hartlepool but they lose 2-0. The FA Cup dream is over.

Gareth locks himself out of his house and has to borrow some boots. He does some modelling for Attitude magazine but he can’t score for toffee so the club sign a new striker, Josh, the league’s top scorer. Bernard goes for a fitting of his wedding suit. The only time he usually wears a suit is when he’s in court, says Jonno.

The Salford council hygiene inspectors pay another visit to Babs’ kitchen. This time she passes with flying colours and gets a five star rating – which is exactly what this excellent fly-on-the-wall documentary deserves. Tune in to the second programme in the series next week.