Review: Cinderella at The Opera House 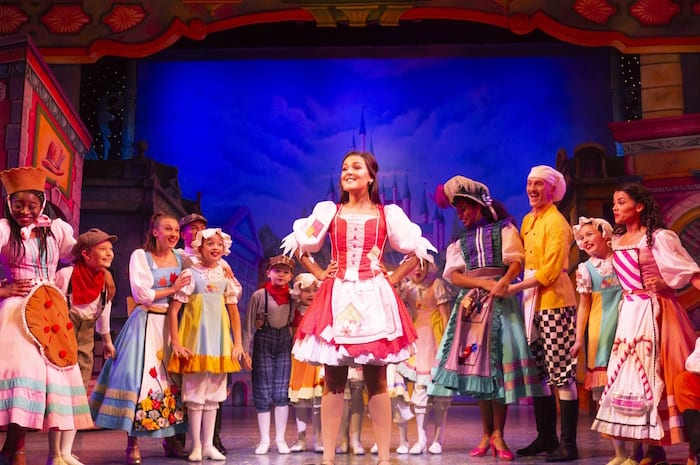 The Christmas pantomime is not to be sniffed at. For many people, it’s their first experience of theatre which often grows into a habit.

Qdos Entertainment have produced a cracking one this year based on the story of Cinders and her two scene-stealing ugly sisters, who are so well played that you don’t really want to boo them during the curtain call.

The main selling point of this production of Cinderella is the cast. Connor McIntyre and Les Dennis worked together on Coronation Street as Phelan and Michael, two characters who despised each other. Here they play the Ugly Sisters, Phelena and Michaela, whose mutual loathing is exploited for belly laughs at every turn.

Their interaction with the audience is joyful, with their gags staying on the right side of family entertainment. They clearly love being on stage in the most outlandish get up, looking more like Bet Lynch and Liz McDonald with each costume change.

Gareth Gates and Shannon Flynn are in fine voice as the Prince and Cinderella. They don’t always manage to stay poker faced when some of the unscripted comedy kicks in, and that rubs off on the audience who really enjoyed the antics on the night I attended.

The delightful Hayley Ria-Christian, who plays The Fairy Godmother, is a superb singer and gets the chance to belt out Fabulous Baby from the show Sister Act. I just wish she was on stage more because she is a great performer.

Jack Wilcox, who has starred in the likes of An American in Paris, adds a touch of West End class and again has great vocals.

Ben Nickless (Buttons) is a seasoned comedy performer and you can tell. This man is a dynamo and there is nothing he cannot do as Cinderella’s right hand man who loves her but cannot find the words.

He has some great routines involving a box of records, which he reads out at full pelt to fill in the narrative, some brilliant impersonations of Gary Barlow, Mark Owen and Jose Mourinho, which leave you aching with laughter, as they are so spot on, and physical gags which left many of the kids in the audience shrieking with glee.

This is why pantos work, because hearing kids laughing like this, away from a tablet, phone or TV, is one of the best things about this time of the year.

Writer Alan McHugh knows how to write a good gag and manages to have a great balance of jokes for children and adults, without going into the realms of smut.

This is all good family fun. Director Guy Unsworth is aware that there are little ones in the audience so there are no dull moments, and there are some magical effects involving a talking bear (don’t worry, it’s not Nookie or Ted) and a flying coach and horses.

With a great ensemble and local kids from the Stalder Academy of Dance in Sale, dazzling costumes, really funny references to Corrie for fans of the Street delivered by the superb double act that is McIntyre and Dennis, talented leads, a soulful fairy godmother and a Buttons who wows not just the audience with his energy but his fellow performers as well, this is the stuff that fairy tales are made of.

The only thing missing is star turns from kids in the audience who take part in a competition on stage.

Some people are snobby about pantomimes, but the talent and stamina required to perform in one is quite something. This one will leave you glad you turned off Netflix and left the house.

Cinderella is at The Opera House until 30th December.