Review: Brief Encounter at The Lowry 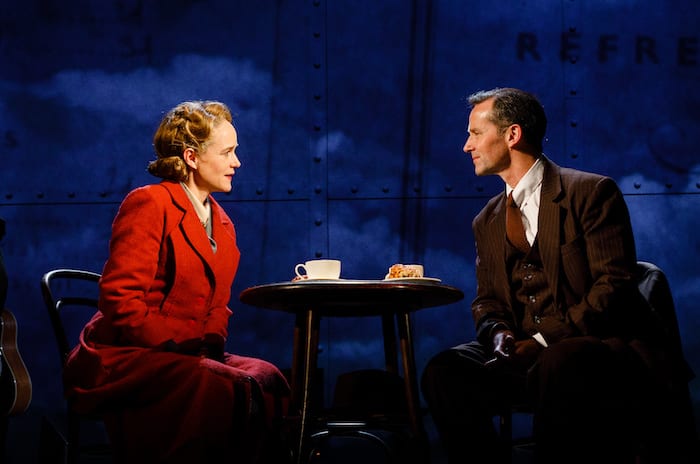 David Lean’s classic film Brief Encounter works on several levels. It features two middle class characters, Laura and Alec, who meet at a train station and then embark on a love affair. Riddled with guilt, they know this must stop, as they cannot lie to their spouses any longer.

But if you imagine being gay in the 1930s, (when the piece was originally written, as a short play called Still Life) you begin to understand the passion and repression that lies at the heart of Emma Rice’s illuminating adaptation of this true classic.

You may remember the film’s characters as being slightly po-faced and buttoned up. But have a look again, as there are some glorious scenes which highlight the cinematic joy of things that go unsaid. A brush of Laura’s coat as Alec says goodbye. The glint in Laura’s eye when Alec first meets her and removes grit from it, and then becomes the apple of her other one. These magical moments are celebrated in this beautiful production.

But this is far from robotic re-tread of a much loved film. There are old music hall style numbers, slapstick comedy, and the most wonderful supporting characters who stop the piece from becoming maudlin.

Laura and Alec (played by Isabel Pollen and Jim Sturgeon) have regular pit stops at the railway station coffee shop run by Myrtle Bagot (Lucy Thackeray), a stoic lady who enjoys the attention bestowed on her by Albert (Dean Nolan, who plays multiple roles incredibly well). So you have two completely different love stories playing out alongside each other.

Young love is also explored in the guise of Beryl (Beverly Rudd) and Stanley (Jos Slovick), who enjoy leaving work five minutes early to go and get a bag of chips and have a snog before they are expected at home.

Neil Murray’s set design works a treat. It captures Laura and Alec’s meeting place of the train station perfectly, and along with Jon Driscoll and Gemma Carrington’s evocative and clever video projections, the marriage of theatre and cinema is met with astounding results. Characters step onto moving trains and become black and white before your very eyes.

The cast are completely flawless, with Isabel Pollen and Jim Sturgeon leading from the front, capturing not just the stiff upper lip but also those ‘unseen’ moments when their characters let their guards down when they think no-one is watching.

Lucy Thackeray is always watchable as Myrtle, caught between being independent to the outside world, but enjoying the attention of a man, who can protect her.

Dean Nolan plays four roles, and is magnetic in all of them, particularly, Albert, the object of Myrtle’s affection.

Beverly Rudd is a superb comedy actor, as proven in the TV show Trollied, but with Kneehigh’s productions, she shows she can sing, dance and act. With comedy conveyed at every turn, she is an absolute delight.

Jos Slovick as Stanley has the voice of an angel, and you just want to listen to him all the way home.

The musicians who remain on stage after playing in the foyer to begin with are an absolute dream. They play perfectly, bringing heart and soul to the piece.

Emma Rice has created a Brief Encounter for today’s audiences, without turning it into Love Island. She respects the original material, but is also aware that because of the Hollywood sex scandals and #MeToo movement, there has been a change in attitudes. So the focus is on Laura and how this affair makes her feel.

We are not sure if Alec has done this kind of thing before, but the way he makes Laura feel is far more realistic and life changing that anything in the ridiculous Fifty Shades trilogy. And if you have something of the old romantic in you, you’ll believe that Laura is ‘the one’ for Alec.

Cinematic, passionate, funny, filled with musicality and guaranteed to leave you walking on air, Brief Encounter is worthy of a tram ride to The Lowry. Once you are immersed, you won’t want to get off.