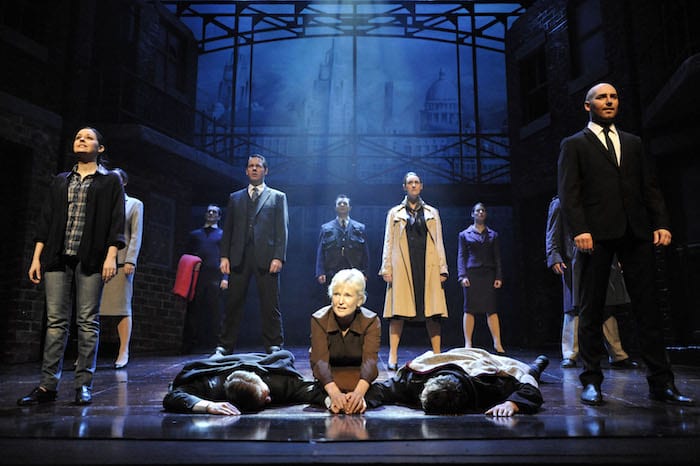 Willy Russell’s Blood Brothers is one of those musicals that has been around for so long  that it could pass you by. It’s a bit like a sale at DFS. You could think ‘I’ll catch it next time’.

If you did, you would be making a huge mistake. It may be thirty-something, but it still sprints like a lean teen on Red Bull.

The play, by the man behind Educating Rita and Shirley Valentine, focuses on class and the divide between rich and poor. It’s a regular on the touring circuit and is still relevant and still resonates.

Nature vs nurture is the main thread running through the show. Mother of seven Mrs Johnstone (the wonderful Lyn Paul) battles to pay her bills, her husband long gone, and  has another baby on the way.

She receives the news that she is expecting not one baby, but two, which would tip her and her neighbours over the edge. 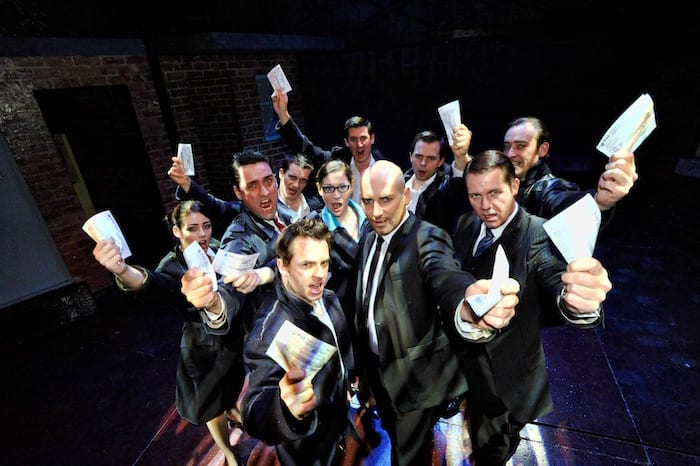 But as Mrs Johnstone polishes her rich boss’s furniture and cleans her floors, the lonely lady opens up to her. She is unable to have children. The pain is etched on her face and she is just as lost as her employee.

Mrs Lyons persuades Mrs Johnstone to give up one of the twins, so she can bring him up as her own.

Like Billy Elliot, it explores the effects of Thatcherism and has anger running through its veins, as well as comedy and melodrama.

But Blood Brothers also has a narrator, who is rarely off stage. He reminds us how dark this tale is going to become and brings a sense of foreboding. As the plot unfolds, you realise that this is a Greek tragedy set in Liverpool.

Bob Tomson and Bill Kenwright’s production has as much passion and drive as it ever did, three decades on. They respect Willy Russell’s cracking script, which is illuminated by a brilliant cast. They act as if this is their first time in the show – quite a feat considering some of them have performed in this production countless times.

Lyn Paul is the lynchpin and carries the show with superb vocals and the ability to present Mrs Johnstone as far more than than a single mother. She is funny, heartfelt and the audience has genuine empathy for her plight. Russell’s writing means that you are on here side throughout. Paul is a definitive Mrs J.

Narrator Matthew Craig is quietly menacing, laughing at the back of the stage at much of the Scouse humour, only to arrive stage left bearing bad news. He looms like a cross between a red gas bill and a laughing ventriloquist’s dummy on Blackpool Pleasure Beach,  and harmonises sweetly with Lyn Paul.

Sean Jones has played Mickey – the twin Mrs J keeps – so many times he could do it in his sleep. The amazing thing about this incredible actor is that he plays it like a virgin, which allows him to tap into your tear ducts for the very first time. 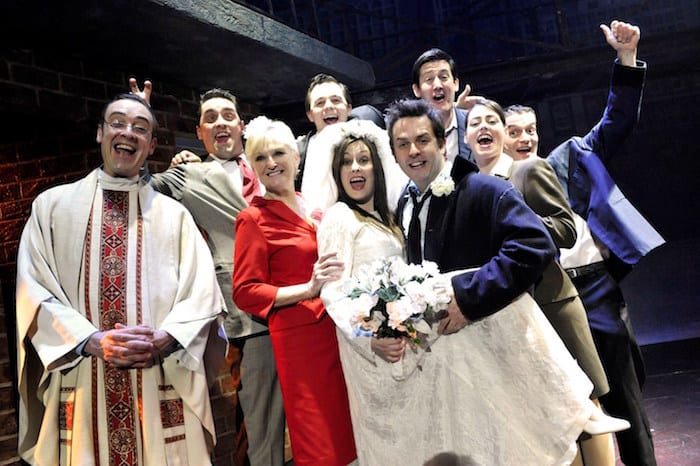 The same applies to Mark Hutchinson as Eddie, Mickey’s twin. The chemistry between the brothers is electric and therefore makes the denouement even more heartbreaking.

Sarah Jane Buckley presents Mrs Lyons as a victim rather than a villain. She has a sense of longing and her pain is deep. Her vocals are as smooth as her character’s expensive dining room table.

Graham Martin gets a special mention, as he has been with the show many times, and flits between many different characters with the energy of an athlete.

Daniel Taylor, another regular, plays Sammy with real pain in his eyes, which contrasts with earlier scenes where he plays a child with wonder and excitement.

Nick Richings’ lighting acts as a storm cloud hovering over the Johnstones.

This isn’t the musical theatre of pearly white teeth, glitter and permagrins. Blood Brothers offers you grit, loads of laughs and plenty of heartache.

It is a masterclass on how to write a musical, weaving politics and gender identity into a story about trying to survive without hammering you over the head like Russell Brand.

By the time Lyn Paul is singing Easy Terms and living on the never never, you will be so moved you will be booking a return visit. This terrific tale of two brothers parted at birth will be in your blood.

Blood Brothers is at the Palace Theatre until 26 May.