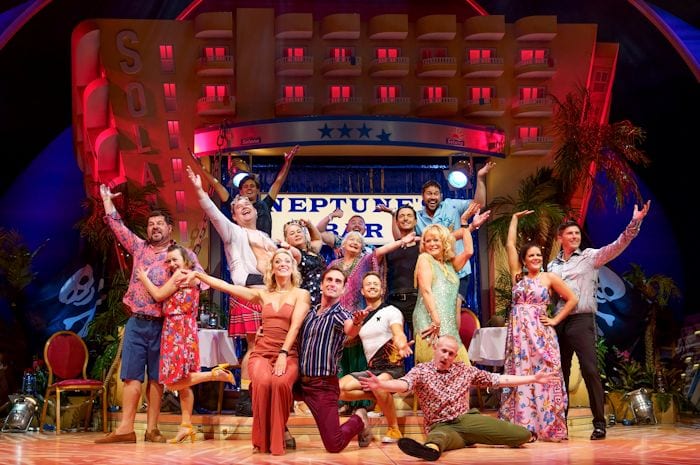 TV comedy Benidorm ran for 10 years and had a huge following. Now the show is touring theatres all over the UK, stopping off at Manchester this week and bringing a ray of sunshine to a particularly cold start to the week. Cue fake tan, bum bags, cocktails, and more double entendres than Are You Being Served?

As soon as Benidorm Live begins, you must accept that this 1970s-style humour is like reading a bunch of saucy postcards. Imagine Blackpool with a heatwave and that is the feel of this sun-kissed sitcom.

If you want politically correct comedy, I would stay at home. In the first five minutes, there are jokes about transvestites and, not far behind, are gags featuring swingers and gay characters, with more stereotypes than you thought possible.

But there is more on show here than simply base level humour. Yes, there are punchlines set up and the humour is obvious, so the audience find themselves laughing before the full gag is delivered.

But there is such a knowing swipe at all comers that at times the show makes affectionate but accurate observations on Brits abroad.

The plot follows a Fawlty Towers style set-up. The Hotel Solano has two middle-class visitors who stick out like Theresa May in a bingo hall. So staff begin to mistake them for hotel inspectors and the farce begins. It then morphs into Duty Free, as we witness a clash of class.

With references to all-inclusive holidays and Brits who prefer sausage in cider (read this quickly for the full effect) to gazpacho, the show sends up expats who are fuelled by Tetley Tea and digestives as much as it does the Spanish stereotypes who have to suffer the indignity of having to repeat buy diazepam 2mg tablets everything because they are misunderstood by people who can only speak one language.

The cast are all game and seem genuinely pleased to be back, alongside some newcomers.

Jake Canuso struts and flirts with the audience as the infamous Mateo. As a trained dancer, he also gets the chance to click his Cuban heels.

Janine Duvitski plays swinger Jacqueline with a naughty glint in her eye, whilst Tony Maudsley delivers lines like speeding bullets, hitting the target every time.

Adam Gillen as Liam brings more than is on the page because in his capable hands this is much more than a panto character. As the hapless hairdresser, he has a sense of longing and wants a family that will love him. His scenes are very touching and because of his vast theatre experience, he is totally comfortable on stage.

Shelley Longworth is in fine voice as holiday rep Sam, and Asa Elliot provides the cheesy entertainment you often see once everyone has flopped outside, following an all-you-can- eat buffet which results in you staying put at your hotel.

With Brexit in full force, it is nice to see a show where people are enjoying holidaying and living in Spain without a care in the world. The B word is never mentioned, nor is immigrant. Instead you hear many of writer Derren Litten’s Carry On-style innuendos.

Subtle it isn’t and newcomers to the show may find it goes too far. But if you’re a fan, you will be laughing like a drain as you sip your imaginary sangria.

Benidorm Live is at The Palace Theatre until 1st December.