Review: Back to the Future – The Musical gives Manchester audiences the chance to go back in time

Manchester audiences are being given the chance to go back in time with Marty McFly and Doc Brown in this musical version of the hit film by Robert Zemeckis.

If you have seen the movie only once in the 1980s, you might be forgiven for thinking that it may not stand up as a classic today.

But the opposite is true. The movie has great scenes and quotable dialogue, a star is born in Michael J Fox, and Christopher Lloyd has never been better as the manic Doc with a time machine in the guise of a DeLorean.

And the premise of meeting your mother and father when they were teens, only to find much of what they tell you not to do, you see them doing in abundance, is inspired.

So, we have a fine film – which spawned two sequels, including a brilliant skit on the Western with the final installment – but does the world need a musical version?

The producers certainly think so and the original team who made the movies are back, including Bob Gale, (co-writer of the film and in charge of the book, here) the film’s director Robert Zemeckis is on producing duties here and Alan Silvestri’s iconic music makes a return.

Glen Ballard, who worked his magic on Ghost – the Musical, hopes to do the same with new songs that he has penned with Silvestri.

As soon as you take your seat, you realise you are part of an event. A giant clock counts down and you can sense the excitement in the stalls and beyond, as audiences have come to relive their favourite moments and go back in time. 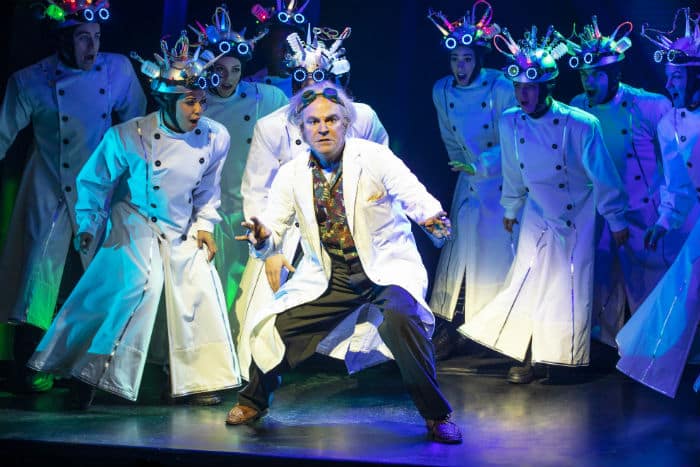 There are slight plot changes to move with the times, but there is clearly a desire to remain loyal to the original text, and by adding songs this increases the run time to almost three hours.

Some of these – Hello – Is Anybody Home? and 21st Century – are quite innovative and have the feel of a Broadway show. It does feel as if the producers have said ‘Go big or go home.’

The problem is, though, that they lack the hooks to make them truly memorable. And there is nothing here as funny as songs from the screen-to-stage version of Legally Blonde, or as heartfelt as Once, Waitress or Kinky Boots.

There is a great deal on offer for the fans, and they are given the film’s greatest hits on a plate with fries. This means that Olly Dobson’s Marty McFly, although confident, assured and completely in control, becomes an impersonation of Michael J Fox.

He has clearly been directed to do that, so much so he even pauses the same way and has the same facial expressions.

Despite this, he gives a winning performance and his scenes with Roger Bart (Doc Brown) recall the finest on-screen odd couples. Watching these two acting alongside each other in synch is a real joy.

Bart has genuine gravitas and brings his own manic version of the Doc.

Hugh Coles is an appealing George McFly and even though everything his character does gets so much applause, it begins to feel like a big budget pantomime, though he does gain your sympathy as the bullied teen, watched by his son.

Rosanna Hyland as Marty’s mom is superb and you realise how she could make these songs soar, if they had clever lyrics or the beauty and grace of Sara Barielles’ work in Waitress.

Cedric Neal as Goldie Wilson lifts the show and it almost soars because of him. He has the vocal chops and he knows how to connect with an audience. His part though, is so small that you long for him to return. The producers realise this and give him another role as Marvin Berry – a singer. I could watch him all day and night.

There are some stunning effects and illusions here, and the car is a star, itself.

Mary Poppins, though, which is currently playing to packed audiences in the West End, has all of this and more and one vital ingredient which is missing here: heart. John Rando’s production is so busy trying to give film fans what they came for that it rarely stands still to give you food for thought or make you feel something.

It needs to lose some of the songs and tighten up. At the moment, you feel as if you are in a car being driven by someone who is cautious on a motorway when they need to put their foot down, and speeding through a village when they need to slow down.

Some the changes to the plot mean that the peril and danger which gave you the emotional response is now gone. Marty gets upset when he thinks he might not ever see his friend again but, this part of the story is fudged so much in this stage version, that the emotional payoff is stilted.

There is a great show in here somewhere, but a great musical needs big and bold songs that take you on a journey and leave you humming the tunes. When songs from the original movie are performed, the audience whoop and cheer, as that’s why they have come Back to the Future: to feel the Power of Love.

Back to the Future is at the Opera House until 17th May.