Review: An Adventure tells stories we need to be told

This is an epic production and it spans seven decades, three continents and covers themes of racism, gender and politics 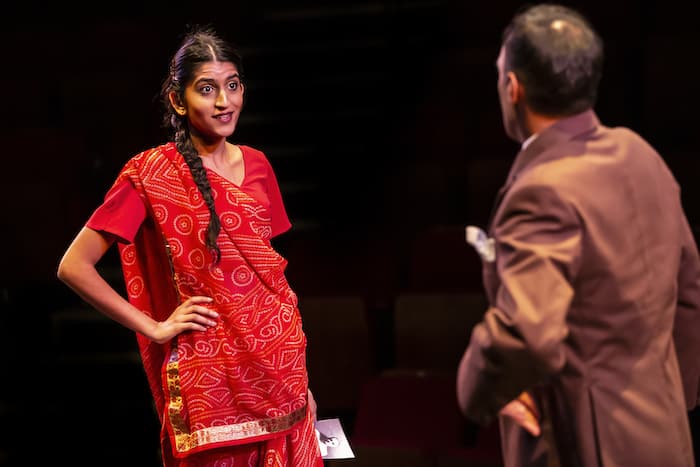 When the word immigrant is reduced to a term used in a newspaper headline, designed to create panic and uproar, we forget the human beings at the centre of the story and the nightmarish journey they have experienced in order to call somewhere their home.

Vinay Patel’s An Adventure was staged at The Bush in 2018, and what resonated with audiences was the fact that the story reflected their family history and how they came to be.

One good thing that has come out of the pandemic is the fact that many theatres have taken a look at their programming and they have strived to allow audiences to see themselves on stage.

The Octagon is one such theatre, and in April they are also staging Habibti Driver – a new comedy described in the blurb as East Meets Wigan.

An Adventure begins in India in 1953 and we meet an incredibly headstrong teenager, Jyoti (played brilliantly by Saba Shiraz) who escapes through the adventures of others in Bollywood films.

Until she meets a suitor Rasik (played with wide eyed wonder by Esh Alladi) who promises to take them both on adventures of their own.

Little does Jyoti realise just how much upheaval and turmoil awaits, as the two try to find somewhere to settle.

This is an epic production and it spans seven decades, three continents and covers the themes of racism, gender, politics and the rocky path of first generation lives in 1960s Britain and beyond.

At over three hours in length, it still manages to hold your attention for the most part. And this is due to the terrific performances and the witty, yet deeply truthful writing.

There is something very candid about it and it does leave you thinking about some of the many issues which are uncovered and exposed.

It is hard to believe that this is Saba Shiraz’s stage debut, as she embraces Vinay Patel’s dialogue and delivers it like speeding bullets which pierce her stage husband’s heart many times.

She also conveys the feeling that Jyoti has pleased others for much of her life, and when she finds her calling, time is ticking on by, hence she spends every waking day fighting for the rights of workers who are treated differently to their white counterparts.

Esh Aladdi starred in Hobson’s Choice at the Royal Exchange and gave a dazzling performance, as a quiet and humble man and here, he delivers an equally compelling turn.

He and Shiraz have excellent chemistry and they age through their subtle body language which conveys how their difficult lives and experiences have meant that the years have rolled on by, leaving them feeling stranded.

There are times when Patel tries to tell us so much, that the play does start to meander and drag slightly particularly during the final act.

Rasik’s friend, David (played with equal confidence and vulnerability by Daon Broni) has a fascinating story to tell about life in Kenya, as a black man who is not allowed to own property.

Rasik remains optimistic about the future but David is more realistic and is living a far more dangerous life than he lets on. But this feels too rushed to have maximum impact.

Separately, these strands are fascinating and they do put a spotlight on story arcs which are often ignored, so that crowd-pleasers can be programmed, which equal bums on seats.

But, for a play to hit the three hour plus mark, you need pace, so that the audience do not realise how much time has taken place. The final act does drag a little too much, as it is trying to do too much; inform, educate, make you laugh, cry and have a poetic quality.

Director Kash Arshad clearly loves the material he is working with here and I can see why but there are moments when repetition takes place via video footage and the play would benefit from a ‘less is more’ approach.

Saying that, there is much to admire and enjoy here, namely these incredible performances and the epic sweep of the piece and the fact it does not seek to tie everything up a neat bow.

Against a backdrop of Windrush and Brexit, we need these stories to be told, as they demystify the lens that has been used in the past and highlight just how these extraordinary journeys and sacrifices made by so many, deserve respect and applause, as opposed to hatred stoked up by fear inducing news headlines and party politics.

An Adventure is the Octagon Theatre until 26th February and tickets are available here.