Review: Aladdin is a must-see panto for all of the family this Christmas

Expect a lamp-load of comedy, jaw-dropping special effects, sensational songs and plenty of boos and hisses 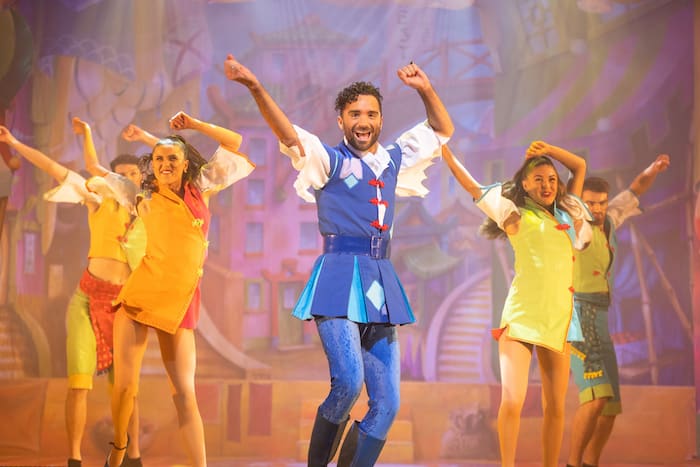 You can experience a whole new world this festive season, as the family favourite tale of Aladdin takes on Manchester Opera House’s annual Christmas pantomime.

With phenomenal music, brilliant dancing, and hilarious acting, this panto succeeds at being the perfect pick-me-up performance, and is guaranteed to put a smile on your face.

As the audience is transported to the land of Mancunia – a playful nod to the city of Manchester – the Spirit of the Ring (Alexandra Burke) tells the tale of the Lamp of Legend, where a genie resides inside.

However, only the chosen one can open the cave of wonders to find the magic lamp, where the Genie of the Lamp waits to grant his master’s three wishes.

Aladdin (Matthew Croke) must find his destiny by retrieving the Lamp of Legend himself, so that he can marry his love, Princess Jasmine (Rumi Sutton).

Along the way, his brother, Wishee Washee (Ben Nickless) and mother, Widow Twankey (Ceri Dupree) help Aladdin to overcome the many obstacles in his way, as the evil villain Abanazar (John McLarnon) wants to find and use the Lamp of Legend, as well.

The opening number of the panto is breath-taking, with an upbeat musical number and bright, colourful costumes on all of the performers parading around the stage – especially Widow Twankey, with her extraordinary elaborate dresses and never-ending wardrobe.

A favourite moment for all of the audience was the famous magic carpet ride, as Aladdin was sent into the air on a magical flying carpet.

Audience members in the first few rows were subjected to a remarkable view of Aladdin flying above their heads, as the rest of the audience were also able to witness the enchanting scene from a distance.

The Genie of the Lamp takes the form of a spectacular giant puppet, breathing life into the well-loved character from the Disney adaptation – however, with its own twist, as the genie provokes the audience into fits of giggles with his uncharacteristically Mancunian accent.

Abanazar’s snake form also stole the show, as the huge serpentine puppet loomed over the crowd, building the audience’s anticipation for the evil villain to be defeated.

In predictable panto fashion, audience interaction plays a key role in the production, as most of the characters have some kind of catchphrase for the audience to greet them with.

Each and every one of the actors in this year’s Christmas panto went above and beyond to provide the audience with an unforgettable experience, even going as far as to wish personal happy birthdays to audience members, with a little singsong to mark their special day.

Charming comedian, Ben Nickless, excelled in providing the entire audience with laughs and giggles throughout the performance, balancing the perfect amount of child-like humour with a few well-placed innuendo jokes for the adults, too.

Wishee Washee quickly became a crowd favourite as the show progressed, a testimony to Ben’s perfected comedic talent, as he takes on his 17th year in the magical world of pantomime.

Widow Twankey’s role in the panto was vital to building the amusing atmosphere, enthralling the audience whenever she would enter the stage, asking us ‘How do I look?’ to which we must respond with ‘Faaaaaaabulous’, immediately making her a popular character amongst the audience – especially when Widow Twankey and Wishee Washee would band together to form the ultimate comedic duo.

Distinguishable powerhouse, Alexandra Burke, makes her return to the Manchester stage for the first time since December 2019, marking her panto debut in this feel-good show.

The X Factor winner takes on the role of Scherezade, who is the Spirit of the Ring, leaving the audience blown-away by her sensational singing skills, even treating us to a performance of her hits Hallelujah and Bad Boys.

Musical theatre star, Matthew Croke, returns to his widely recognised West End role as Aladdin, whilst bringing the lovable character into a new comedic light in this year’s Christmas pantomime.

Capturing the audience’s hearts with his delightful acting, singing, and dancing, Aladdin is perceived in a whole new light, as he brings the audience with him to a whole new world.

Although there were a couple of bumps along the journey – an accidental wrong name here, or wardrobe mishap there – the cast managed to swing things back around as they played it off with spectacular comedic timing and improv, ultimately providing the audience with some of the best laughs throughout the performance.

Featuring a lamp-load of comedy, jaw-dropping special effects, sensational songs and plenty of boos and hisses, the whole family will enjoy this extraordinary pantomime this festive season.

Aladdin is at the Manchester Opera House until 2nd January 2022, with performances twice daily. Tickets start at £13 and are available here.