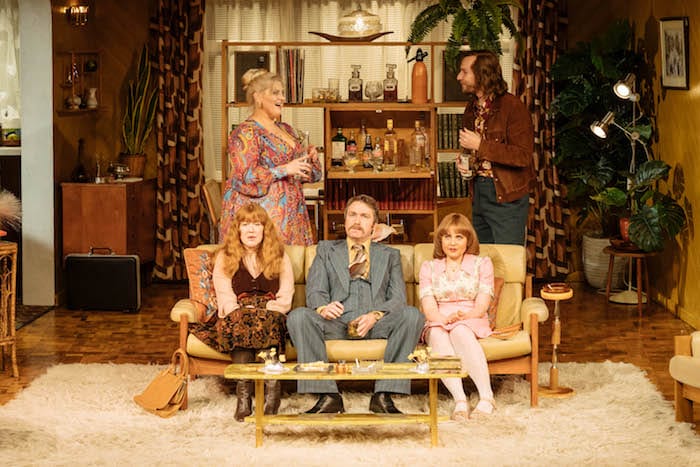 Mike Leigh’s take on 1970’s suburbia is a British Who’s Afraid of Virginia Woolf with cringe worthy comedy moments where things are uttered that should have remained unsaid. We are used to this type of comedy now:  The Office, The Royle Family, The Thick of It and After Life have taken this baton and run with it.

Janet Bird’s excellent set design, featuring MFI wooden décor, chintz and a hostess trolley, is spot on. But this is a production with far more than window dressing to carry you through an evening which goes from happiness to hell.

On the surface, Beverley (played with excellent comic timing by Jodie Prenger) has it all. She lives in a nice house and can buy whatever she wants when she wants. But, as Jodie herself has said, Beverley is the ‘original desperate housewife.’ 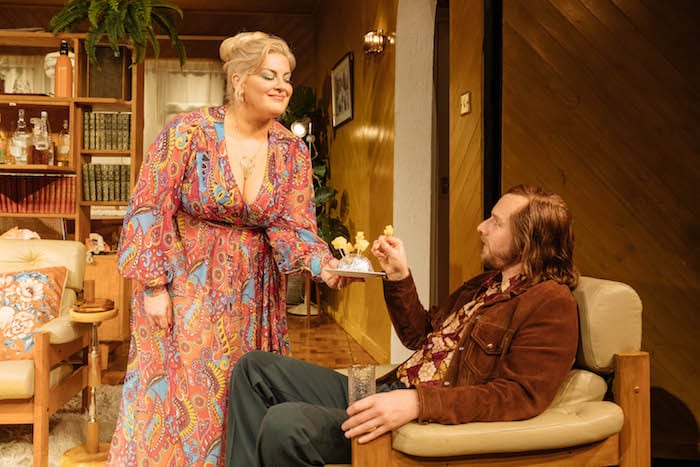 She and her husband, the hapless Laurence (Daniel Casey), have vastly different tastes and interests and spend much of their time sniping at each other. He works all hours and she spends time making the house look perfect, but something sad and poignant lies beneath.

The audience is invited to a party with Beverley as the hostess. Neighbours Ange (Vicky Binns) and Tony (Callum Callaghan) are invited, alongside Sue (Rose Keegan), whose 15-year-old daughter Abigail is throwing a party of her own in the house across the road.

The play opens with Beverley fluffing the cushions to the soundtrack of Donna Summer’s Love to Love You Baby and the scene is set. This sad and lonely character is about to trap some prey, like a human Venus flytrap.

Fun-loving on the surface, but desperate to be admired and loved, or even noticed, Beverley is played with a real sense of mischief by Prenger. This versatile actress has always been great at comedy, and here she excels, with every line she delivers loaded.

She scans the horizon as each guest becomes like a lame duck in a shooting gallery.

Vicky Binns plays the nice and sweet Ange who is perfect for Beverley to devour because she is so naïve. Binns is perfect and underplays the comedy so that you feel for her character, as she is also trapped with the quiet but domineering Tony. Callum Callaghan plays him with ease, saying very little, but he has anger inside him and his wife clearly annoys the hell out of him. With each drink, this becomes clearer.

Rose Keegan’s Sue is intelligent and calm and is also being ‘played’, as she is constantly offered ‘top-ups’ until she is blind drunk. 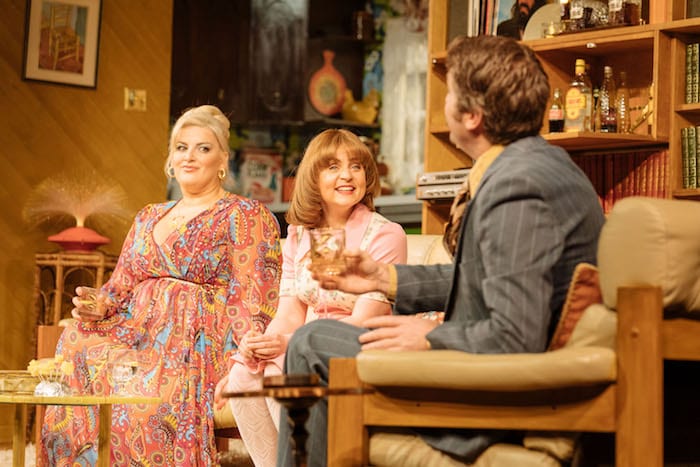 Daniel Casey’s Laurence is Beverley’s long suffering husband whose only crime is that he is incredibly nice and a tad boring. But the lady of the house is bored with life. She is trapped within the confines of what looks like a perfect house from the outside, roaming around like a zoo animal with very little space in which to move and breathe.

Sarah Esdaile’s production is well performed and the actors never miss a moment to bring out the pathos of this timeless piece. There are times when more pauses which stay true to Leigh’s original text would give more bite, and the venue is too vast to pick up every awkward piece of body language. It would work far better in a smaller space like The Quays Theatre at The Lowry.

But, with Prenger on top form, and a cast who never overplay the comic moments or the deep seated anger and frustration with life which bubbles to the surface like a cup of Camp Coffee, this is one party invite you should accept without delay.

So grab your drinks, add some ice and lemon, and buckle up for a bumpy ride.

Abigail’s Party is at the Opera House until 13th April.