Restaurants come and restaurants go but the Mal still delivers 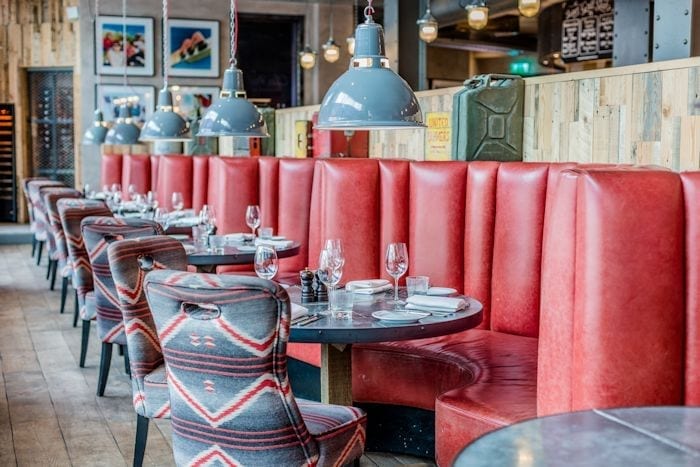 I have been an admirer of Malmaison hotels since the group rescued and converted the listed Joshua Hoyle textile warehouse at the bottom of Piccadilly station approach in 1998.

It was a key event in the regeneration of Manchester, sparking the redevelopment of the first part of the city thousands of visitors who arrive at Piccadilly station get to see.

I’ve stayed at the Mal in London’s Smithfield too, formerly St Bart’s hospital nurses’ home, the Oxford Mal, a stunning conversion of the former jail and in at least half a dozen of the Hotel du Vin, the group’s sister chain, all of them in important heritage buildings.

None of this would matter much if the stays, which have always included dining, hadn’t been great experiences.

So having Saturday night dinner in the latest incarnation of Malmaison Manchester hotel’s restaurant was much anticipated. And it turned out to be a treat. 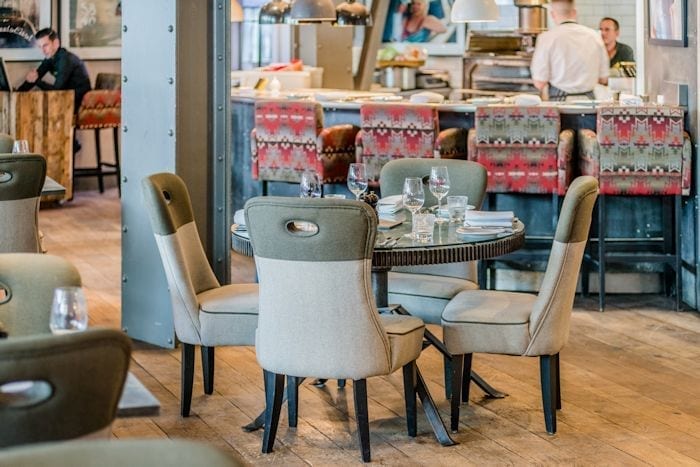 The original brasserie was very atmospheric and decidedly French art nouveau in style.

That was replaced by Smoak, specialising in oak-smoked steaks and burgers in a split-level, post-industrial setting.

It was rebranded Chez Mal last year – the last in the Malmaison chain to do so.

The layout remains much the same as with Smoak, with the American-style bar and restaurant virtually a single entity. It was nice to see both buzzing – nay, rocking – on a Saturday night.

The raised wooden floor remains, as does the booth seating upholstered in red leather and round zinc-topped tables illuminated by functional pendant lighting. 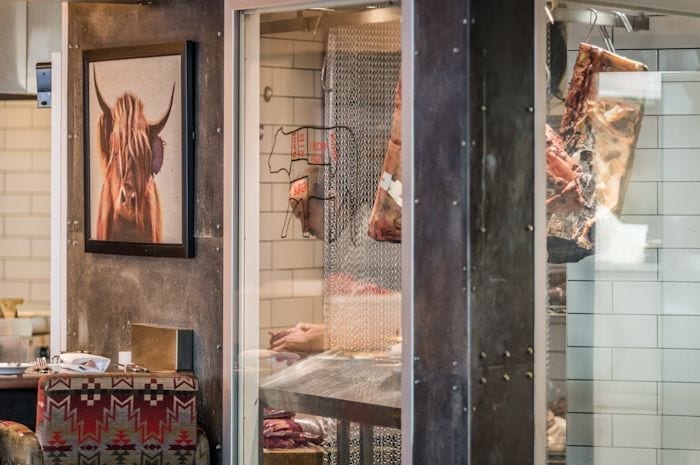 The Josper grill is also retained with cuts of aged beef on display in the huge glass-sided fridge, mainstay of Chez Mal’s range of signature steaks, and sharing stands featuring Chateaubriand and Moroccan spatchcock chicken.

But the scope of the new a la carte menu has been widened and offers a feast of robust flavours. 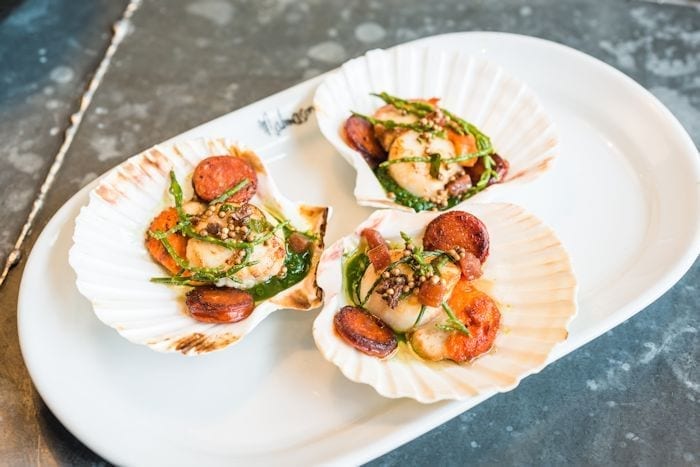 I started with Cornish sea scallops (£13.50), pan seared on the outside with precise timing. Soft, fleshy and delicately flavoured beneath, served on a trio of shells with a sliver of chorizo, spinach purée, sea-salty samphire and a drizzle of lemon-tangy vierge dressing. 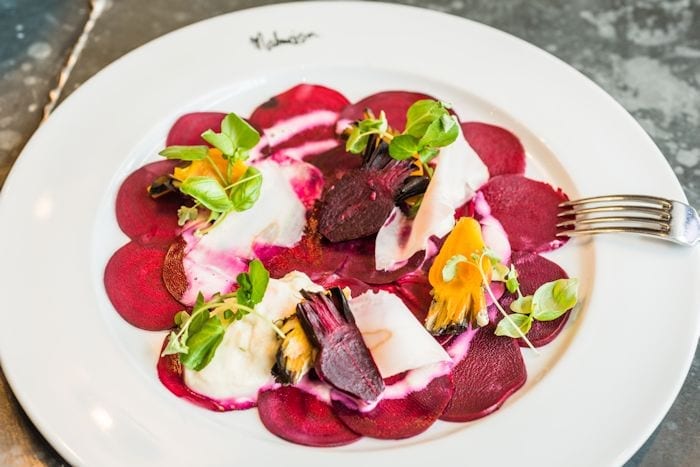 Mrs K opened with a culinary work of art. A stunning arrangement of gossamer thin, melting carpaccio of pepper-sealed rump of beef decorated with cauliflower and roasted garlic cream, tempura florets, Parmesan shavings, pea shoots and black truffle dressing (£10.50) that tasted ever bit as fabulous as it looked. 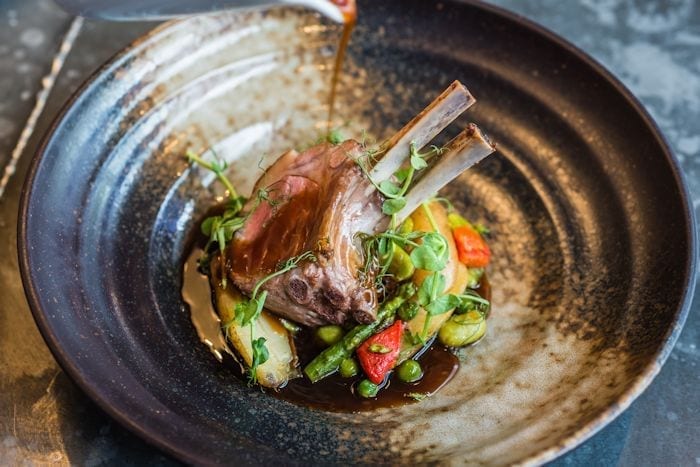 Despite the manifest temptations of the steaks, I opted instead for Yorkshire Dales lamb, a thick and juicy double French-trimmed cutlet, served succulently pink with a side of richly flavoured braised neck (£19).

It came with just-so broad beans, peas, heritage potatoes and slivers of red pepper over which was poured a light vegetable broth. It thoroughly deserved the accompanying glass of rich, plums ‘n’ chocolate malbec (£7). 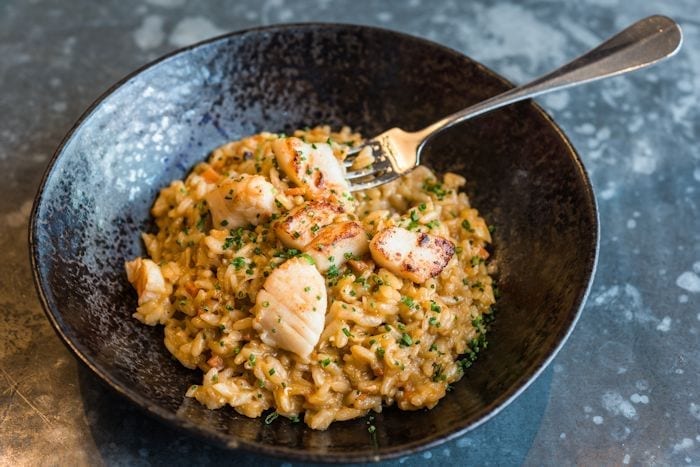 Blondie chose the risotto (£16.50), a luxurious, creamy bowl of carnaroli rice enriched with a generous  amount of white crab meat, simmered to perfection in a rich bisque and finished with those seared Cornish scallops, with lemon butter delivering a lovely contrasting snap of citrus. We had sides of irresistible truffle and parmesan pommes frites (£5) and sautéed spinach with lemon, garlic and olive oil (£4.50).

For dessert we shared a yummy and nicely presented chocolate pavé with pistachio ice cream and green tea syrup and finished off the bottle of refreshing and tropical fruity Argentine Chardonnay-Torrontes (£25).