Back in 2006, I enjoyed two different types of fan experience.

Regularly standing on the corner of Sir Matt Busby Way with cans of Fosters from the off- licence was one. Enjoying the World Cup on a big screen in a sun-soaked fan park in Berlin was the other.

The scale of the dedication to the fans, the atmosphere, German beer and bratwursts gave the latter the edge.

That’s not to say I didn’t enjoy the laugh, beers and pre-game buzz on the streets around Old Trafford – when the weather was good.

That’s until the police banned drinking on the street a couple of seasons later. 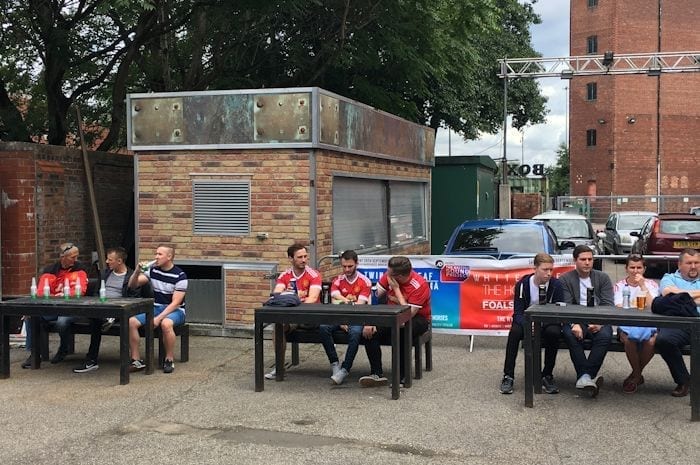 Since then, I’ve been searching for the right pre-match experience. I’ve tried the pubs and the random pop-ups that have appeared over the last few years. Nothing’s really given me the excitement I was looking for. Something more akin to the big game feel of the fan parks in Germany in 2006.

This is what Red Square’s been aiming to replicate over the last few seasons since opening in 2012. And this season they’ve really ramped it up.

First up the name is great – a nod to Moscow in 2008 all travelling Reds will appreciate. 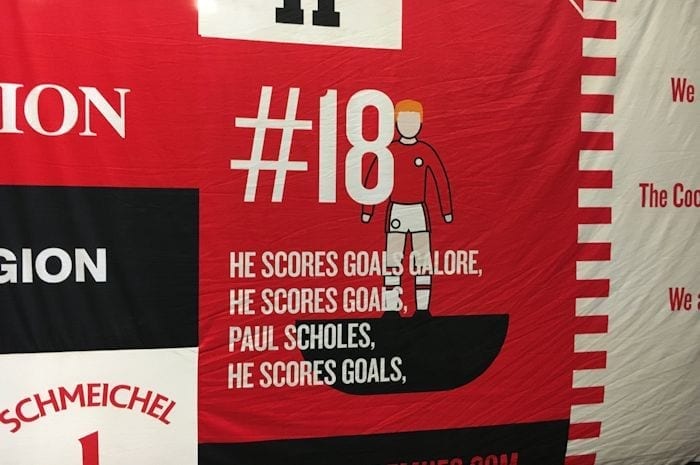 On a match day, it’s all about creating an experience for the fans, by the fans. And this is evident as soon as you set foot in the vast concrete expanse of Victoria Warehouse.

Tucked behind Old Trafford (think the corner of the East Stand and North Stand), the warehouse forecourt is the usual that you’d expect for a pre-game pint. A few lads sitting about in red shirts, getting stuck into their pints and a couple of cheeky fags.

There’s even a replica European Cup to get your picture with. Classic.

But once you make your way inside, past the bar and into the cauldron-esque main room, the United love is next level. 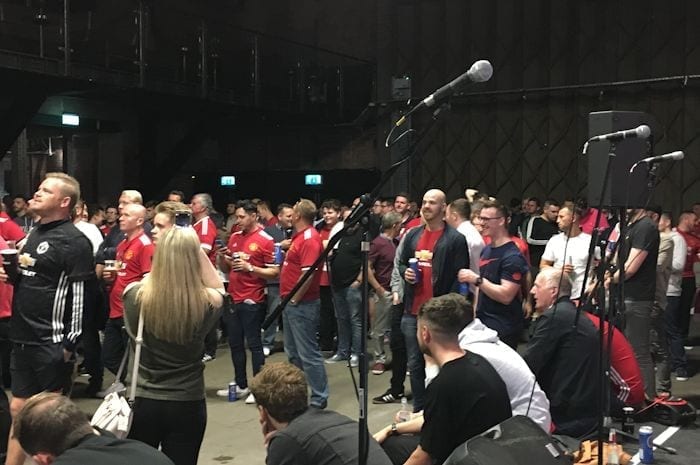 The entire wall facing you is adorned with United flags. Odes to players gone by. Cheeky songs slagging off the scousers. Ditties about red flags flying high. It’s the perfect thing to get you pumped up for the big game.

My only disappointment was that there’s no framed pictures of perma-tanned Clayton Blackmore in sight. Hopefully they’ll take my suggestion on board.

The scale of the whole thing is epic. As is the size of the big screen showing the day’s earlier game.

I arrived a full two and a half hours before kick-off on Sunday. Something I’ve not done since my early megastore days, but plenty of time for a few beers and to soak up the atmosphere. 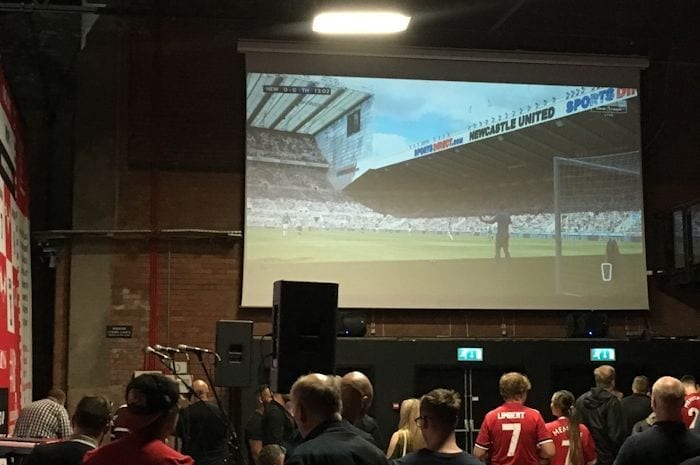 Despite it being only half an hour after the doors opened, it was busy. Newcastle and Tottenham was just kicking off.

I settled into the game with a beer. No warm cans of Fosters in sight here. I sampled the food on offer – a decent curry and Bombay potato combo that’s a massive upgrade on the burger vans lining the streets of Stretford and Trafford Bar.

At £5 it’s well within my match day budget and was massive which was a deal breaker as I was nursing a 5/10 hangover.

The sweetener for the season’s opener at Old Trafford was two-for-one beer (and the chance to win a £100 bar tab) – the flyers were handed out en masse on the routes from the tram stops and car parks. It obviously worked as the place was packed by half-time in the Spurs game. And, what’s not to like about two for one beer? Nothing that I can think of.

It isn’t just the offer on pints that will get the punters through the door during the season. 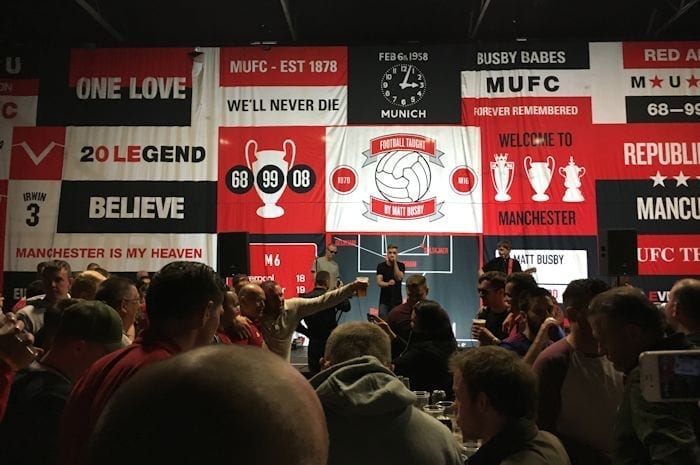 The first thing is the sheer space of the venue. That means that when you step inside on a rainy Saturday you’re not confronted with the hot, wet, close vibe of the local pubs. It still manages the tight, terrace feel, but you’re not nose to nose. We all love United, but no one enjoys that.

As the space is used for a music venue too, the acoustics work wonders for the usual pre-game chants and merry making. I’ve never heard My Old Man sound so tuneful.

It’s also great for the band -up and coming Mancs, Prose- who stepped on stage as soon as half-time in the earlier game hit.  They also played after Newcastle v Spurs finished, creating the ideal blend of rock ‘n roll and football. Something which we all know is a classic combo.

I left feeling satisfied. Four pints deep and hyped for the game. As was the case with Sunday’s result, it feels like things are building.

I can only see positives ahead for the season to come. I’m already looking forward to the atmosphere before the Leicester game (a 5.30 kick off a week on Saturday). And the first Champions League night is bound to be epic.