A short tour of some Manchester drinking houses with literary associations. 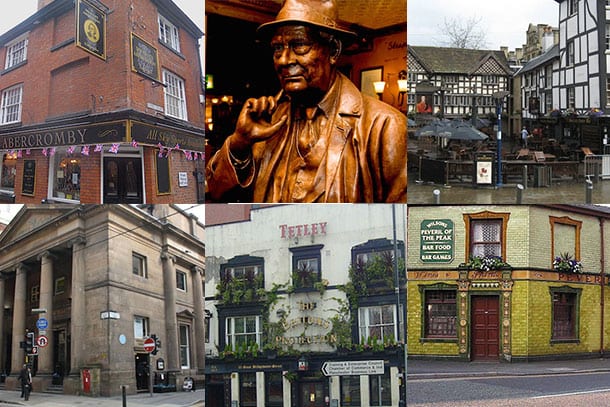 If the Manchester Literature Festival has whet your appetite for great literature inspired by the city, let Emily Oldfield take you on a short tour of some Manchester drinking houses with literary associations. The perfect excuse for some literary inspiration and liquid refreshment… 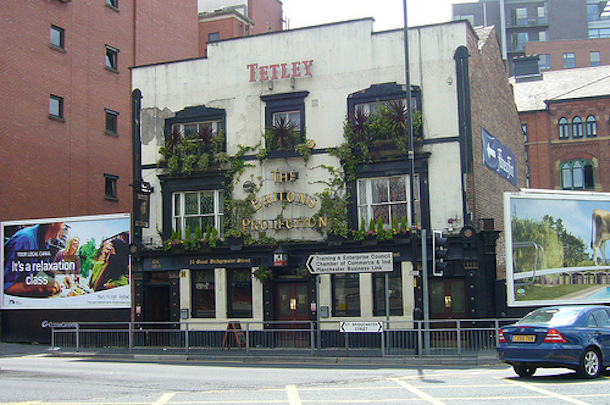 This proud-looking pub, complete with whitewashed front and black bordering, has been at its current site since 1806. Across its walls is a remarkable mural commemorating the nearby Peterloo Massacre of 1819, where an estimated 15 people were killed and up to 700 injured as cavalry officers charged into a crowd of more than up to 80,000 people protesting for parliamentary reform. The event inspired Percy Shelley’s poem ‘The Masque of Anarchy’, with lines such as ‘Rise, like lions after slumber/ In unvanquishable number!’ showing the anger and scale of the protest, and the artistry in the pub makes this clear. It’s cultural and literary links are not just in the past as it hosts ‘Word of Mouth’ storytelling sessions and has been popular with people such as Elbow front man, Guy Garvey. With a collection of over 300 whiskies and fine ales, it is no surprise the pub continues to be popular definitely worth a drink. 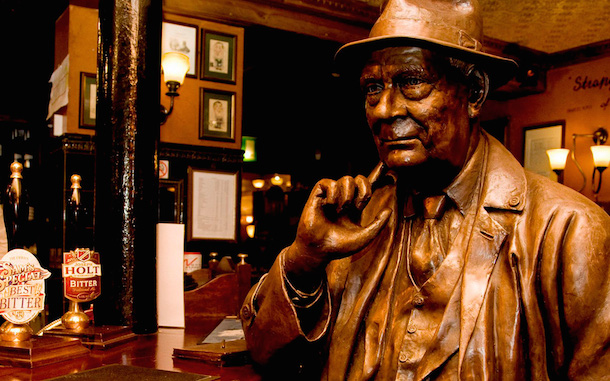 The pub has an impressive 140 year history, with the black and white floors and wooden panelling inside giving in a cosy, olde worlde feel. Anthony Burgess frequented the pub in the 1940s and 50s, where he described ‘cotton brokers gorging on fresh meat. There is a statue on the bar which commemorates LS Lowry who was also fond of the place – the same bar where you can choose from a variety of ales and do a bit of ‘gorging’ yourself on a range of classic British meals.

3. Peveril of The Peak 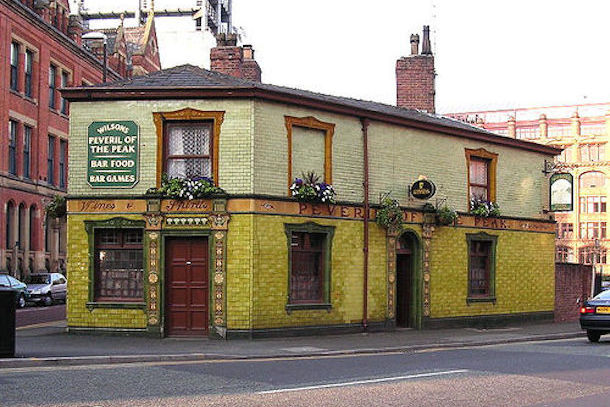 A pub which deserves a mention for its appearance alone – the building is beautifully covered with yellow-green and cream tiles which make it stand out proud from the surrounding area. The interior is just as impressive with genuine bell-pushes and fixed seating. The pub shares the name with Walter Scott’s 1834 novel but some believe the pub’s name alludes to the 24 hour stagecoaches which used to run between the north and London in the nineteenth century. It is such a stagecoach, though on a different journey, which features early in Dickens’ novel ‘A Tale of Two Cities’. 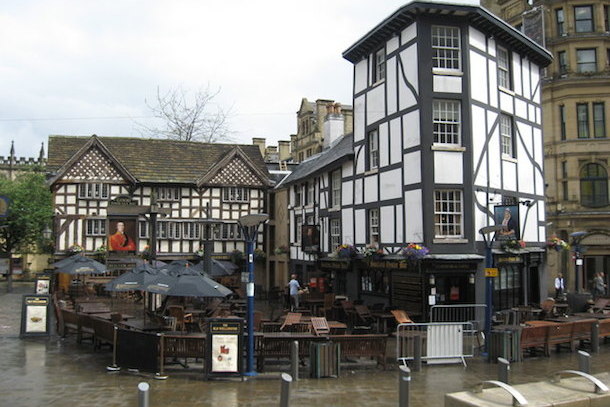 So good they moved it twice! A characteristic Tudor-style pub built with black and white framing and beautiful little windows in 1552 and now located close to Exchange Square. The original structure was actually built close to what is now Market Street, but the whole thing was relocated to the ‘Shambles’ area of Exchange Square in the 1970’s, and reassembled again following the aftermath of the 1996 bomb. Its literary legacy is that it was bought by the Byrom family, serving as a drapers shop and house, and was where the writer John Byrom was born on 1692. it was also a popular place where politicians and radicals would gather. Since the premises became properly licensed in 1862 it has had several names including the Vintners Arms and The Kenyon Vaults. The building was joined to John Shaw’s Punch House (now Sinclair’s Oyster Bar) in the 18th century– and was a known haunt of Jacobites and turbulent political figures. It is now home to a selection of fine ales, cosy interiors and a surprisingly large selection of pies. 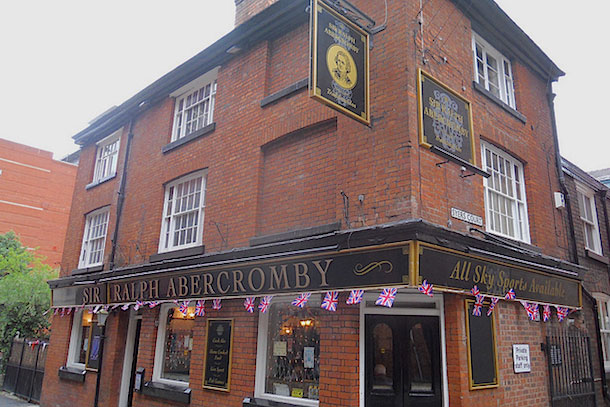 A proper English pub, plain and unashamed, right in the centre of Manchester yet atmospherically tucked away down Bootle Street. It is one of the only remaining structures left from St Peter’s Field, the site of the Peterloo Massacre. This was an occasion documented by many past writers, including Lord Byron and George Cruikshank. The pub has more recent literary associations and was often visited by Dr John Cooper Clarke in his younger days. Named after an 18th century British commander in Ireland, the Sir Ralph Abercromby has an interesting history and serves some quality ales, including an especially good IPA. 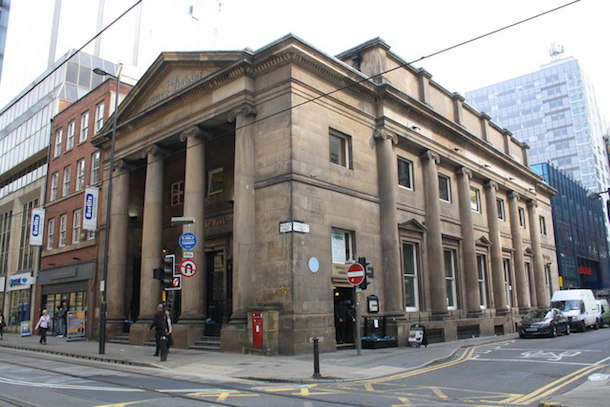 This grand neo-classical building, complete with columns and built in Runcorn stone, looks more like a historical artefact than a watering hole. It has a strong literary history. Building began in 1802 and by 1806 it was used to house the Portico Library, a renowned Victorian place of knowledge. You can still visit the library upstairs via a little side-entrance which takes you up a flight of steps and into an impressive domed reading room. The library is known for its collection of 19th century literature ; the books are still on display and can be used by members who have included John Dalton and William Gaskell, husband of Elizabeth Gaskell. The pub downstairs is named after the Bank of Athens which leased the building in 1921, and offers a grand interior as well as a range of food and ales, currently managed by the pub chain Nicholson.