Are these the best tacos in Manchester? Why Pico’s Tacos at Mackie Mayor is a must

Tacos seem to be everywhere in Manchester, yet somehow, in spite of their ubiquity, it’s more challenging than you’d expect to find somewhere to wrap your hands around the real deal.

Enter Pico’s Tacos, a diddy but authentic taqueria tucked into a corner at Mackie Mayor, the grade II-listed market hall on that sits the edge of Manchester’s Northern and Green Quarters.

First opened in April last year, it’s run by partners in love and life Luc Egret and Laura Howells. And we can confidently say, without a shadow of a doubt, that this is the best Mexican food we’ve tasted in Manchester. For a start, they’re actually making their tortillas with masa harina. 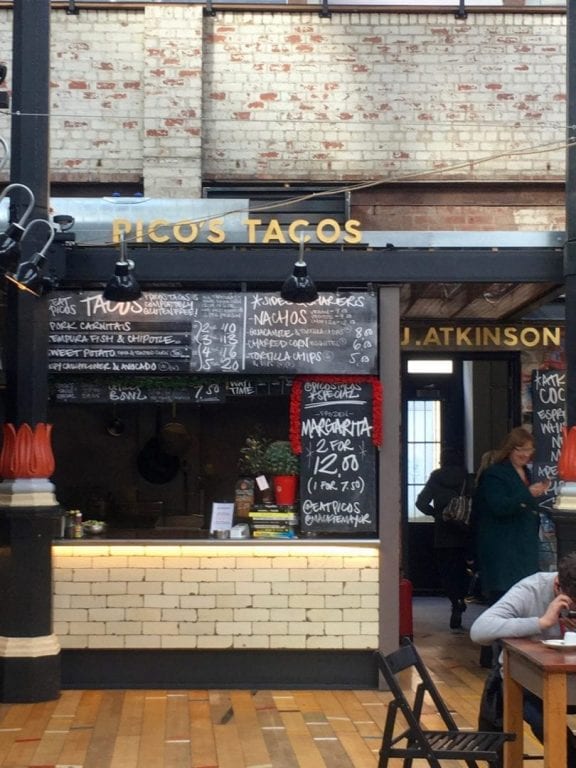 Working from a relatively small kitchen, the menu is concise but thoughtfully put together. Full of flavour, colour and carefully considered textures, each bite offers a sensory delight.

There’s a rotating selection of four tacos on offer (a vegan and veggie option, a meat and a fish choice that has stayed on the menu since they opened), which we try alongside charred corn esquites with fried crispy tortillas and a game-changing plate of nachos. 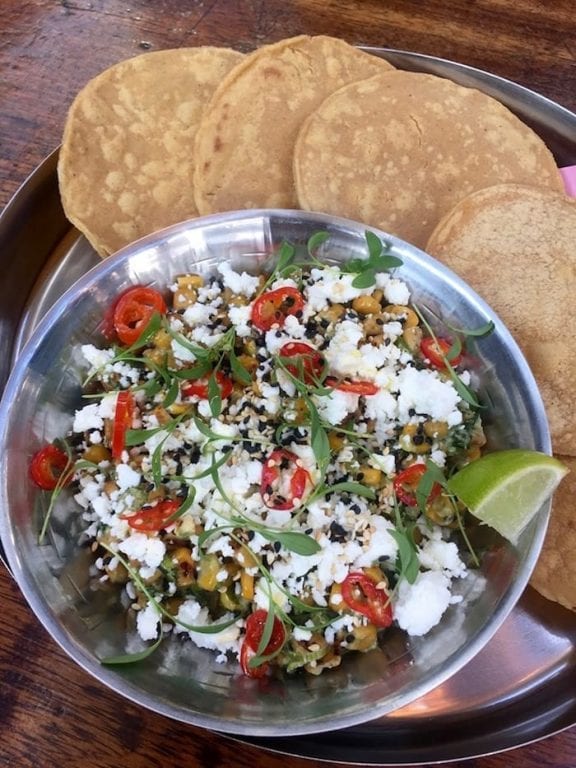 Topped with a sprinkling of seeds, this comes with a side of thick and crispy round tortillas that we snap into fragments and use to greedily scoop up the mixture in front of us. The labour is worth it, though, the end result is divine.

Next, out comes a hefty plate of nachos bursting with colour. These are layered up with smoky homemade cheese sauce (described by Laura as her “greatest achievement ever”), sour cream, guacamole, pickles, jalapeños, and their mouthwatering house-made Mexican chorizo.

Making the chorizo, Luc tells us, is a labour-intensive process that requires them to blend, toast and grind a 40-strong list of chillies, spices and herbs before mixing it in with rare-breed pork mince from Swaledale Farms. 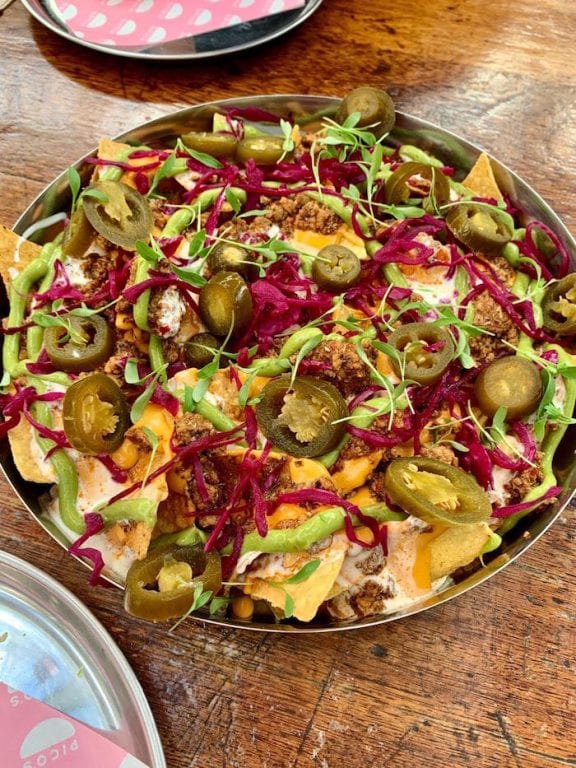 Then it’s time for tacos. Not ones to do things by halves, we try all four: the pork carnitas, tempura fish and chipotle, sweet potato, and cauliflower and avocado.

All the tortillas here are homemade, cooked up every morning and afternoon to make sure they are piping hot and really fresh.

First up is the cauliflower and avocado, which is layered with almond salsa on the bottom and topped with toasted corn, red amaranth and some ancho chilli oil. The cauliflower has been pickled and then fried, giving it a really crispy and charred texture.

Next we dig into the pork, which has been marinaded and then cooked for about 16 hours on a really low heat before being crisped up on their flat top grill. Crunchy on the outside, juicy and succulently soft inside, this is the standout favourite of the lunch.

Served with a sweet salsa verde marmalade, some pickled red cabbage, jalapeños and coriander, it might just be the best taco we’ve ever had. 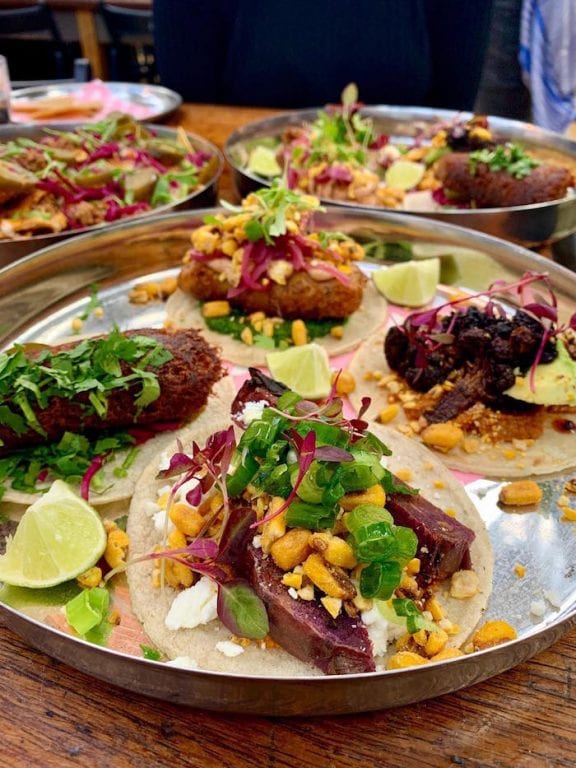 Then there’s the fish taco, which we’re told has been a mainstay on the menu since they opened. Given that Luc is also the man behind the set up of Fin, the fishy counterpart to neighbours Tender Cow, this kind of makes sense.

Last but not least, we finish on a charred sweet potato and feta combination, served with almond salsa, toasted corn and spring onions. The sweet caramelisation of the potato works well with the nuttiness of the feta, whilst the salty corn adds a magnificent crunch.

All this is washed down with a feisty frozen margarita that doesn’t shy away from the lime before we finish with a melt-in-the-mouth chocolate orange pot dessert. 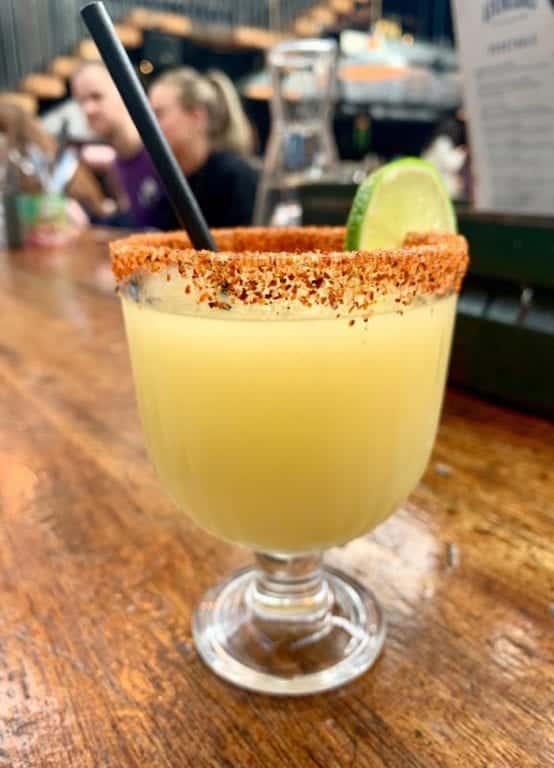 The overarching cry when it comes to Mackies is often that it’s too expensive, and we can’t argue that some of the dishes here are quite dear. But equally, it’s worth remembering that you get what you pay for, and good ingredients don’t come cheap.

With other restaurants in Manchester going as cheap as £1 for their tacos, it might be tempting to stray elsewhere, but if you’re looking for quality then Pico’s is a must. Luc and Laura’s passion for authentic Meixcan is palpable in every bite.

A UCL philosophy graduate, Luc actually left a career working for a Westminster political think-tank to explore the world of food and, after completing a 12-month cookery course, spent three years in London Michelin starred kitchens before heading up north in 2016.

Arriving in Altrincham on a quest to learn about markets, he ended up covering shifts in various kitchens at Mackie Mayor’s South Manchester counterpart before hosting his own market stall Spring Break Tacos – which in turn sowed the seed for Pico’s.

Luc and Laura met as she was launching her street food business Grain and worked together in catering for a year before starting Pico’s together.

Having spent nearly a year at Mackie Mayor, the pair now have eyes on a second opening at Altrincham market, which will allow them to develop new ideas and expand their menu thanks to a bigger kitchen with more space.

Due to open on 7th April, Luc tells us to “expect to see a lot more ceviches and tostadas as the summer months come in, not to mention bigger and better frozen margarita machines with more flavours on the go to keep the good people of Altrincham hydrated!”.

We’ll see you there.