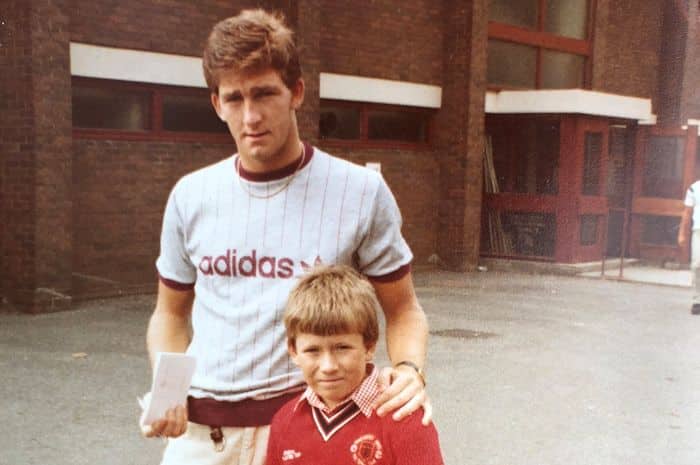 If the pandemic has taught us one thing about football, it’s that the game is nothing without the fans. No spectacle, no atmosphere, no noise, no passion.

Without the fans’ protests, the future would be a European Super League of the wealthiest clubs playing each other endlessly in meaningless games for the TV cameras.

With the new season about to start and things finally starting to get back to normal, a project has been launched to capture Manchester United fan culture through the decades, with the aim of preserving social history for future generations.

United Fan Culture Archive is an evolving collection of documentary photography and a nostalgic look back at the good old days, created by United fan Michael Brennan.

“I’m a proud Mancunian and being a United fan has always been a key part of that,” says Michael, 40, from Flixton.

“One of my earliest memories is a picture of United winning the FA Cup in ‘85 being on my bedroom wall and grew up idolising Bryan Robson.

“My first game was a 1-0 win over Southampton at Old Trafford in April 92. I went with a friend and his older brother. It was my only experience of a standing Stretford End, which as an 11 year old was crazy. I didn’t even see the goal go in and had to climb up to see what was going on.

“I love United, obviously, but I also love social history and photography. I love looking at old photos and hearing people’s stories. A good friend of mine shared some photos of his dad’s from supporting United in the 70s The photos are incredible – and are featured in the archive – and contributed to me wanting to do something that celebrated the ordinary fan culture.”

It’s surprising how many photos from the 70s and earlier it contains. Everyone’s got a mobile phone with a camera these days and everyone takes photos and shares them online.

But back in the old days when footballers wore their hair long and their shorts short, it wasn’t that simple. You had to remember to take an old fashioned camera with you if you wanted to capture that special moment. Then you had to get the film developed.

Luckily, some people did just that and you can see some of the photos on the website – United fans through the years  outside Old Trafford, on away days to Wembley, at home in the back garden before the match with the neighbours’ washing in the background.

The archive is a not-for-profit organisation working in partnership with homelessness initiative Big Change MCR.

“Creating the archive has been a definite labour of love in terms of both United and social history,” says Michael, “but in setting it up I wanted to do something positive, which is why I sought out a partnership with Big Change MCR.

“Homelessness is an enormous problem in Manchester, as it is elsewhere across the UK. It’s a really complex issue, with no simple solution, but I was really drawn to Big Change MCR due to the practical nature of what it does to help people experiencing homelessness. If the archive can help to raise awareness of such a great cause, and encourage donations, while also celebrating the culture of Manchester United fans, then it has achieved its objective.”

You can follow United Fan Culture Archive on Twitter & Instagram and submit your images of supporting United over the years. Please email your photograph/s to michael@unitedfanculturearchive.com including your name, the location and the year the photograph was taken and feel free to add a bit more about the story behind the photograph.