On 16 August 1819 the area around where St Peter’s Square is now was the scene of a bloodbath. Armed cavalry stormed into a crowd of over 60,000 innocent civilians who had gathered to peacefully protest for parliamentary reform, killing at least 15 and injuring hundreds.

Men, women and children of all ages were amongst the victims of the massacre. They had gathered peacefully to listen to the famous orator Henry Hunt talk about the prospect of parliamentary reform and linked arms when authorities attempted to move in and arrest people.

The crowd’s passive resistance was met with a charge from armed yeomanry followed by 600 hussars, several hundred infantrymen, an artillery unit with guns and more.

The tragedy became known as the Peterloo Massacre – an ironic reference to the Battle of Waterloo.

A campaign for a public memorial was recently approved by the council and The Peterloo Memorial Campaign is aiming to bring an end to a 200-year-old tradition of whitewashing history.

According to campaign founder Paul Fitzgerald, the memorial must be respectful, informative, prominent, permanent.

“Public art can be problematic,” says Paul. “You can think it works and it is easy to do something abstract, but when it is something like a zig zag of steel it sanitises history. It is important that events like Peterloo should be remembered for what they were – a struggle of democracy, and shocking.  That’s why a memorial is needed which is not a bloodbath image, but not euphemistic either.” 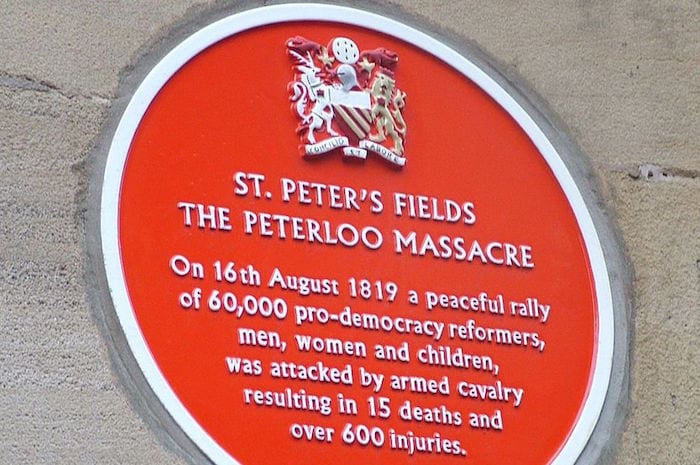 It has been a long journey for The Peterloo Memorial Campaign. They’ve been faced with the prospect of a memorial placed close to Library Walk, an area which is largely out of public view – something they have rejected as Paul who thinks it should be located in a “respectful place of civic pride.”

Their next objective is for there to be as much public consultation about the new memorial as possible. The public should be consulted prior to construction and ideas and designs submitted to the commissioned artist, recently confirmed as Jeremy Deller.

“It is not our place as a campaign to say what the design of this piece for the struggle of democracy should be. The public should be listened to and will have to be consulted.”

Set up in 2006, the campaign aims to improve the way Peterloo is represented and remembered by the public. One of their first moves was to get the inaccurate old memorial plaque on the side of the former Free Trade Hall replaced with a factually correct, red one.

“Journalists at the time supressed the story of Peterloo and since then there has been a lot of euphemistic stuff about it. The original blue plaque didn’t even mention that people died. In 2007 we demanded that it was changed. We even climbed up a ladder and stuck our own on it until it happened.”

Public tributes to the human horror of Peterloo have been historically poor. A neglected monument in Ancoats only lasted between 1842-1888 and even Ford Madox Brown was forbidden to refer to the massacre when he was adding decorative murals inside Manchester Town Hall.

You can support the work of the campaign and be part of the public input on the memorial by visiting http://www.peterloomassacre.org/index.html

They also host events such as recreations of the original marches into Manchester and annual commemorative gatherings which have grown in size from 20 people six years ago, to a 1,000 strong crowd in 2015, with big plans for a 2017 event.