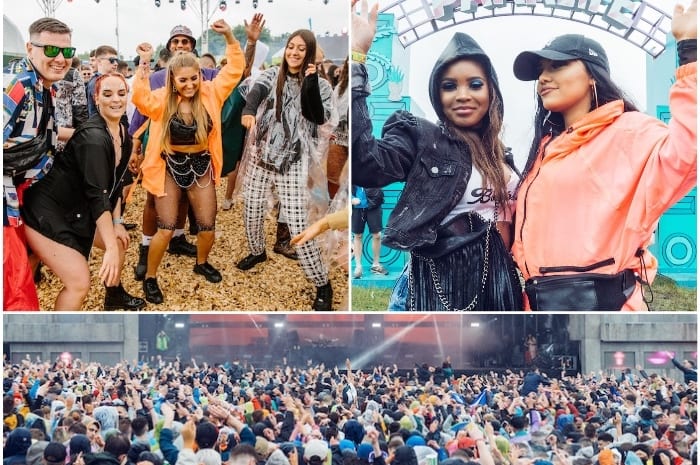 It may have been a soggy start, but rain failed to dampen the party spirit as thousands of revellers descended on Heaton Park for the opening day of the eagerly-anticipated Parklife Festival 2019.

After Noel Gallagher‘s Friday night concert at the park, the ground was beginning to get a tad muddy for Saturday’s Parklife opener, so wellies were undoubtedly the footwear of choice for many heading along.

But the weather didn’t put a halt to the flamboyant outfits that the music festival traditionally attracts – with glittery facepaints, hot pants and bra tops being the most popular fashions – topped with see-through ponchos of course.

And if you thought bum bags had been left back in the 1990s then think again – they were THE accessory of choice for men and women heading along this year.

Click or swipe below for our gallery of photos from Saturday at Parklife:-

Parklife boss Sacha Lord sent a defiant message to those poking fun of the weather on social media, saying on Twitter: “All those warriors laughing at our customers in the rain…they don’t care, they are here to party. Enjoy the afternoon with your mum at the garden centre…and rush back home to Minecraft.”

This year’s festival will see over 120 music acts perform across the seven different stages this weekend – with many areas covered so revellers were able to shelter from the worst of the elements.  Thankfully the rain relented as evening fell across the park and the partying continued into the night.

After the last minute cancellation of Cardi B as headliner on Saturday night, there was a rejig of the schedules which transferred Mark Ronson to the headline slot on the main Parklife stage, and he was due to perform at 9.55pm.

The good news for all those heading along for Sunday is that the weather forecast predicts a day of (mostly) sunshine and slightly warmer temperatures rising to 17 degrees by 3pm.

Acts performing on Sunday include George Ezra, The Streets, Blossoms and Solange.

Click here to see our gallery of photos from Sunday’s revels at Parklife.