ONE LOVE: Ariana Grande will return to Manchester for superstar-studded benefit concert 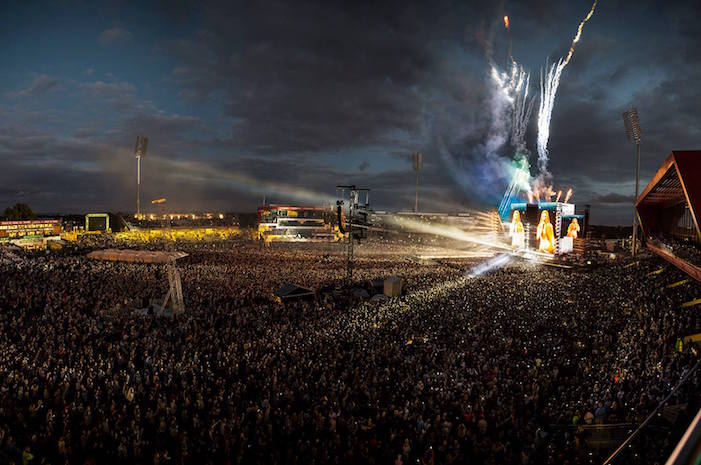 A huge line-up of music icons including Coldplay, Justin Beiber and Katy Perry will join popstar Ariana Grande at a benefit show at Emirates Old Trafford Cricket Ground this weekend.

The One Love Manchester concert will take place on the evening of Sunday 4th June and raise money for those affected by last Monday’s terrorist attack on Manchester Arena which killed 22 people.

Tickets go on sale this Thursday online at Ticketmaster with other artists are yet to be confirmed.

The concert also marks a return of Ariana Grande to the city, following the attack in the closing moments of her gig. In a statement uploaded to Twitter she stated:

“I’ll be returning to the incredibly brave city of Manchester to spend time with my fans and to have a benefit concert in honour of and to raise money for victims and their families. I want to thank my fellow musicians and friends for reaching out to be a part of our expression of love for Manchester.”

Other musicians joining her for the gig include Take That, Niall Horan of One Direction, Miley Cyrus, Pharrell and Usher. The event will be screened live on BBC TV and Radio.

Ticket prices have yet to be announced, with proceeds of around £2m going to the We Love Manchester Emergency Fund set up by The British Red Cross and Manchester City Council to help victims of the attack and their families.

David Hodgkiss OBE, Chairman of Lancashire County Cricket Club, which is based at the venue of Emirates Old Trafford said:

“The victims, families and friends of all those affected by the tragic events of Monday 22 May remain at the forefront of everyone’s thoughts. We are proud to be part of what promises to be an emotional occasion, and a showcase of music, enjoyment, memories and reflection, that we can hope can go some way to easing the pain and heartache that this great city has endured in the last week.

“The pride, strength and spirit that has been seen in the last week is testament to the character of the people of Manchester, and this has continued with the warmth and generosity of some of the world’s greatest music artists and their management teams, as well as all of the other people, organisations and services that are part of making the concert on Sunday 4 June happen.”

Liam Gallagher is set to play a sold-out gig, Elbow’s Guy Garvey is coming together with Manchester Orchestras for a tribute concert and a number of iconic Manchester bands including The Charlatans, Blossoms, The Courteeners and Cabbage came together at Emirates Old Trafford on the 27th May for a massive emotional concert. Keep it coming Manchester.