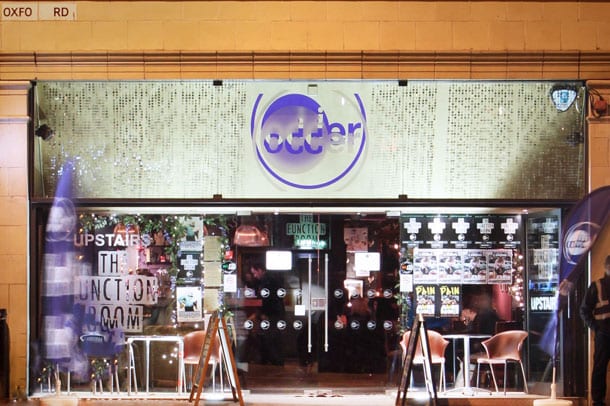 Odder Bar, part of the Odd family that includes Manchester’s Odd & Oddest bars plus recent addition the Blue Pig, has closed its doors and will not be reopening for the new student year.

Since 2006, Odder has served the Oxford Road corridor food, drinks and entertainment on a daily basis and it was one of the first bars to open in the now oft-dubbed Southern Quarter.

Since the launch of the Function Room, the venue on the second-floor of Odder that took its name from the custom-built Funktion One system housed there, Odder expanded its entertainment offer from quizzes and bar sessions to become an intimate late night club venue.

The closure comes as other changes are underway in the Odd Group. Odd and Oddest Bars see new food and drink menus this summer and into the autumn, the DJ and entertainment lineups will be re-launched.

Oddest Bar in Chorlton is undergoing a full interior & exterior refurbishment, designed by hip agency No Chintz – revealed this week. And brand new websites for both Odd and Oddest, designed by Manchester agency Pin, are due 1st September.

Plans are also underway for a full refurbishment of the Blue Pig, the latest addition to the Odd family, and an extension into the basement below to create a larger bar and event space.

Cleo Farman, Director of the Odd Group said: “After many happy years on Oxford Road, it’s time to call it a day.”

“We’ve had some fantastic times at Odder, however, the area has changed completely from when we first started out and it feels like the natural time to move on.”

She added: “I shall miss Odder loads and it will leave a big hole in the group, but I’ve had an offer I can’t refuse which is enabling me to do some exciting new projects which are happening as we speak.”