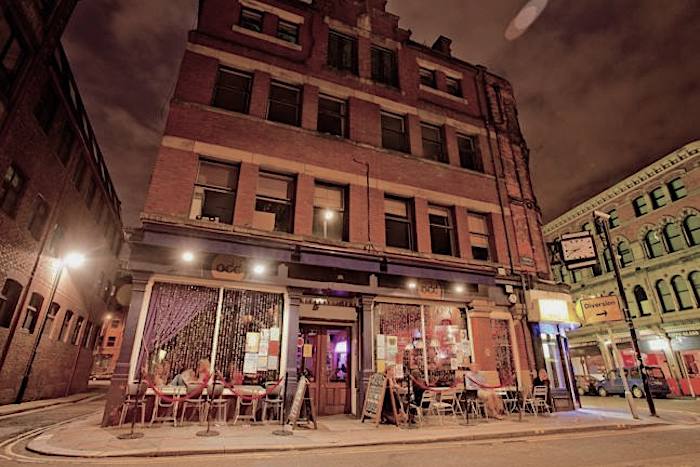 As I sit in a pub chatting to Matt Nickson and Adam Regan, what strikes me first is how much energy they bounce between them.

Ideas flow, even while we’re sitting there talking about their new ventures, starting with their takeover of the old Odd Bar in Manchester and Oddest, its sister site in Chorlton.

The news that the Odd Bar chain is no more hit some of us hard. It was the last remnant of that little corner of the ‘old’ Northern Quarter. Most of the venues have been taken over, changed, or simply gone.

But Matt’s background and Adam’s success with Stage & Radio bode well for something a little bit more community-oriented making its way back into the city centre.

Some people may know Matt from his Matt & Phred’s days. But those days are firmly behind him. I know him as a musician, a vintage record DJ and, with his wife Annabel, as one half of my ultimate couple.

They own an allotment. They tour the country with their vintage games and music. I could listen to Matt play for hours and chat with Annabel over vintage fashion and a gin or two.

The two met when Adam invited Matt to play at Stage & Radio. Their friendship developed when Matt told Adam the history of the venue. Once Adam sold the site, ideas began to form.

“We’ve had a few things in mind, and then this one came up. We had five different ideas that were really, really strong. One of them was the vegan café, one was this thing called the Mash Tun with a friend of ours called Scott Martin who’s a brewer, and is training to be a master brewer. We had another one that was a restaurant idea, and another one that was the completely live music thing, and we were just looking at venues.”

What started as a chat over their plans for Folk & Soul on the old Odd site soon turned into a discussion about food.

Adam began to talk about the plant-based menu that’s going to be on offer and it’s enough to make your mouth water – vegan or not.

“These are some of the dishes we’ve been working on,” he told me. “Roasted artichoke hearts with satay with crushed peanuts and a nice dipping sauce. Roasted vegetable salad – beautiful tenderstem broccoli, fennel all chargrilled – oh and the cauliflower popcorn! Lemon juice, olive oil, charred til they pop, panko breadcrumbs, deep fry them, with a little sumac and lentil reduction on the side.

“And you know what the best vegan meal, peanut butter sandwiches. Put that on the menu, that’s all we need.”

“The vegan idea was about him being an amazing chef,” says Matt, pointing to Adam, “and our allotment and the opportunity came up with this site.

“If you go anywhere in England, you can get a great steak with mushroom and tomato and chips. You go to anywhere else in the world, and it’s all about vegetables. Meat isn’t the centre piece of the dish. Meat was never the mainstay of our diet. It was always something special, an indulgence.

“We didn’t eat meat every day and we’ve no reason to. We’ve got the best vegetables, and there’s stuff being grown that we’ve forgotten that we’ve got. Cheshire potatoes used to be considered to be the best potatoes in the world. Fylde asparagus was served on Cunard Lines right the way through til the 1930s. Cheshire gooseberries are the best in the world. You don’t get any better than that. It goes on and on and on.”

The food isn’t everything though, as Matt reminded me.

“Then there’s the music. It’s about contacting people, letting people express themselves and finding space for the creatives. It’s exciting. I’m interested in the new wave of folk music in town. Really, really interested.

“I think we’re going to develop from the acoustic upwards, because the venue suits it. We might not have a funk band in there, or a rock band, but maybe in the next venue. Musicians really need a home, and we really need to get it sorted.”

Adam agrees. “In Dublin, you walk down the street and in every venue there’s a band. We want that in Manchester.”

The revamp of Odd isn’t everything though. Oddest will become The Mash Tun and they’re just as excited about that. With a less restrictive menu, it’s set to become a haven of craft beers.

“Scott has been a friend of mine for the last six years, and this guy’s attention to detail is obsessive. He is coming to market with 47 different beers ranging from mango chilli and lemongrass saison, to roasted coffee chocolate stout. Mash Tun isn’t about us. It’s about us supporting him.”

These are the first of a string of ventures for Matt, Annabel, Adam and Scott. And I for one am incredibly excited to see how things develop.