Deansgate’s latest addition to the Manchester food scene has opened, and is certain to be a favourite with fans of beautiful plating, inspired dishes and passionate work.

The result of two chefs and a baker – Max Yorke, formerly of Edinburgh Castle/Hispi, Julian Pizer of 3hands deli, and Danny Foggo of Holy Grain sourdough/3hands deli – Another Hand is far from being “just another” dinner spot.

Instead, it is a haven for natural wine and a seasonal menu with zero waste in mind. 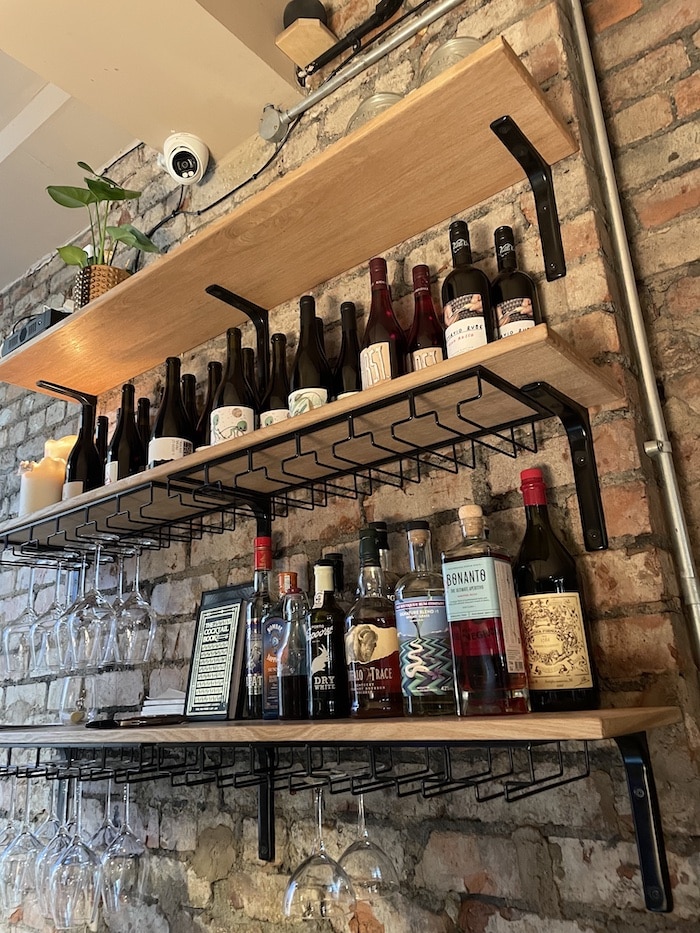 Found on the upper levels of the Great Northern complex, the restaurant’s open kitchen and minimalist dining area is the definition of quality over quantity.

Not to be pigeon-holed into a single style of cooking, each stage of a meal here is unpredictable with the only common themes being the amount of care and thought put into each one. 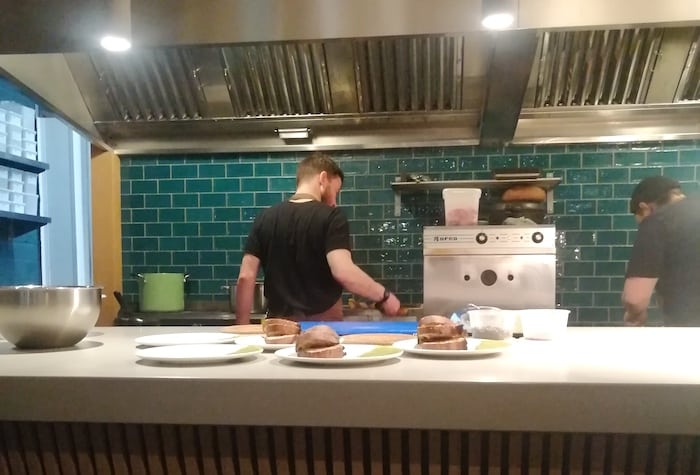 In standard dining fashion, the meal begins with a bread sharer. That is where the common elements we’ve come to expect from a restaurant ends, as the warm sourdough from Holy Grain is served with a smear of whey butter dusted with three-cornered leek, milder and sweeter than wild garlic.

Quite literally a warm welcome, the textures of soft butter, iconic sourdough crust crunch and the aromatic butter make for a delightful start.

Following the bread comes a dome of Hereford beef served with thin slices of barbecued celeriac on top and garnished with grated and cured yolks. Interspersed within the diced beef are capers, giving each bite a burst of extra flavour. 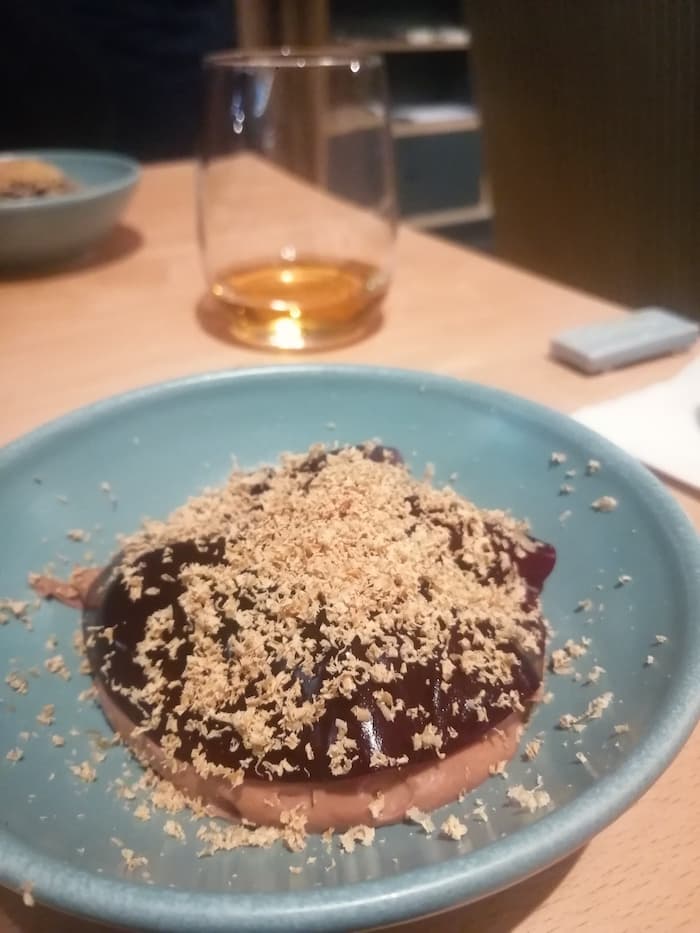 The dish is something of a hybrid between French steak tartare and Korean yuk hwae. Both being raw steak dishes, it makes sense and is done spectacularly.

Rather than using the Worcestershire sauce that can be found in many tartare variations, Another Hand have used a brushing of yuzu with the celeriac sheets for a touch of bright acidity, as well as a helping of sesame oil to give it an extra level of aroma.

The next dish comes in the form of a fired squash that resembles a fruit eclair. Using the roasted squash as a vehicle for hung yoghurt, sumac and marmite-baked seeds, Another Hand create a mystery that is like a puzzle on a plate. With each bite it becomes clearer as to how each component fits together.

Though the squash itself doesn’t hold a heavy flavour profile, it acts as a bridge between each of the contrasting flavours topping it. All of this is topped with a balanced vinaigrette, creating a multitude of different tastes with every mouthful depending on the combination that you find on your fork. 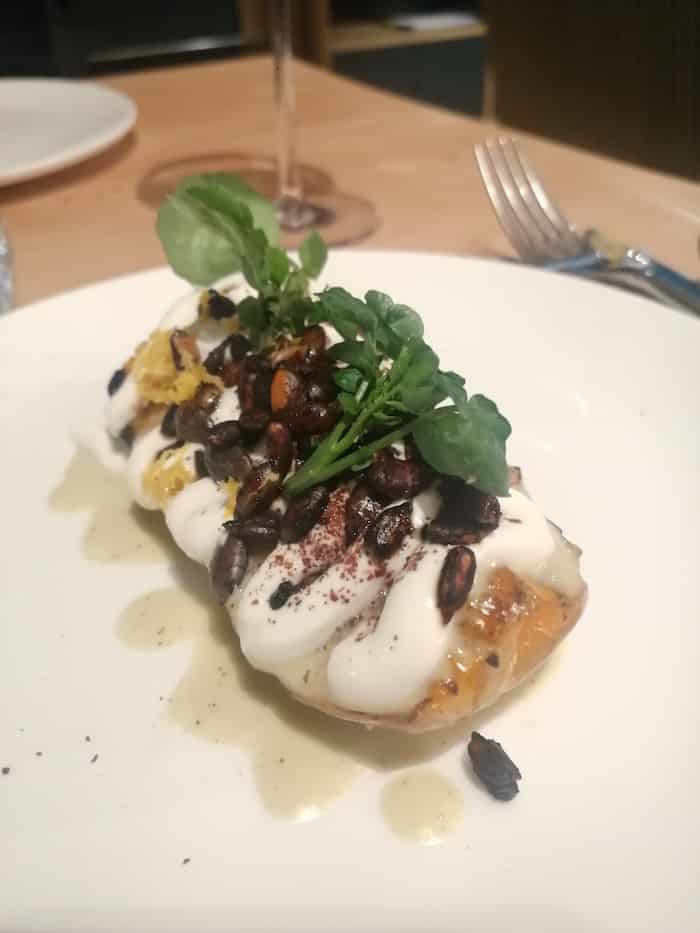 Rounding out the savoury courses is the flamed cornish mackerel. Served in a smoked turnip dashi made in-house, along with salted plum and burnt apple, this is arguably the highlight of the meal.

The process of cooking the mackerel alone has been refined such that there is the perfect balance of char on the skin side that has been exposed to heat and delicate flesh that still holds the freshness of the fish.

Aside from managing to cook the fish to perfection, the use of salted plum is an interesting take on classic Japanese umeboshi. Typically using ume which are more similar to apricots, Another Hand have applied a traditional pickling process to british plums which hold more sweetness and juiciness.

Combining the sweet but umami filled dashi base with each bite of tender mackerel, this dish is immaculate and pairs greatly with one of their natural orange wines. 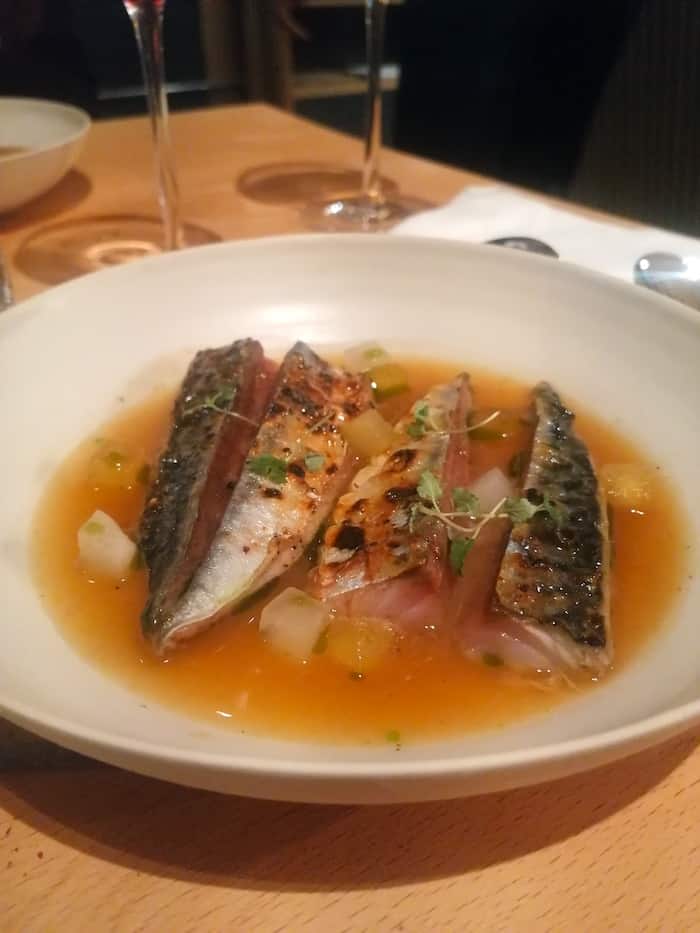 Finally comes the dessert, making use of a fellow Great Northern resident’s creations.

Using cocoa from their neighbours, Dormouse Chocolate, they have created a multi-layered dessert: a sheet of dark beetroot coats a serving of rich chocolate ganache with smoked sea salt.

Similarly to their Hereford beef, the dessert is dotted with refreshing pockets of diced grape, as well as incorporating a light touch of olive oil. Unlike similar chocolate based desserts which can come off as sickly or overwhelming after a couple of bites, this instead is a satisfying end to an impressive meal thanks to the use of fruit, oil and portion sizing. 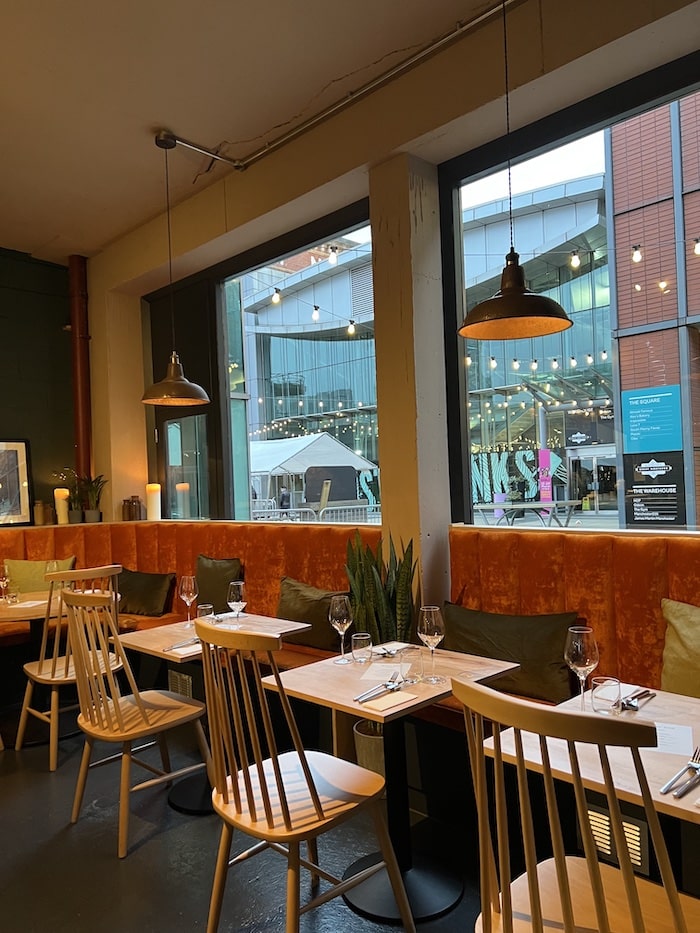 All in all, Another Hand is an exemplary example of the owners’ personalities shining through.

With only a handful of tables, but creations that rival many larger and more outspoken restaurants, it is sure to be a struggle to get on the reservation list in weeks to come.

Once all is said and done though, actions speak louder than words.

Having only recently opened, this may be the brief moment before Another Hand is Manchester’s next worst kept secret.