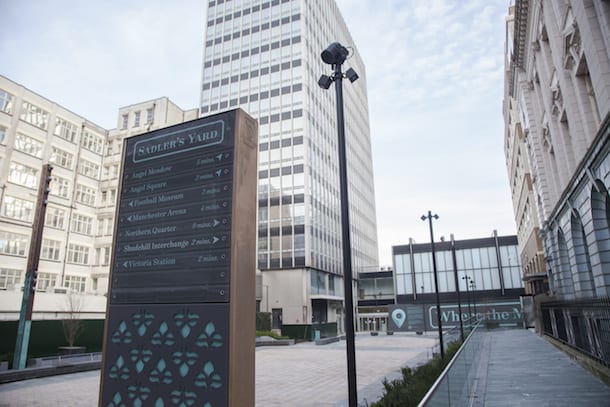 Sadler’s Yard, the first new public space to be created in the city centre since Exchange Square 19 years ago, will be officially opened on Friday 4 December.

Named after, and inspired by James Sadler, a balloonist, chemist and pastry chef who made the first manned balloon flight from Manchester in 1785, it aims to celebrate the spirit of innovation that runs through Manchester’s history.

The new public space at the heart of NOMA is located between the CIS Tower, New Century House and Hanover Street opposite Victoria Station and opens up previously closed-off walkways through the city. It is one of the first public spaces in Britain to be named through online crowd-sourcing after members of the public were invited to suggest names for the site via social media.

The opening kicks off a number of events at Sadler’s Yard, including The Grub Food Fair, which takes place on Saturday 5 December, 12-8pm.

David Pringle of The Co-operative Group, said: “Sadler’s Yard is the public heart of the NOMA neighbourhood and will sit at the centre of a range of beautifully restored heritage buildings and newly created office, retail and leisure space.

“It will change the way people move around this part of the city centre – opening up the streets and forming a gateway through NOMA. It will also forge great links for the Northern Gateway regeneration plans taking shape in the Lower Irk Valley, New Cross and Collyhurst.

“It’s a new city space with an old city feel, and we hope the people of Manchester enjoy spending time here.”

Council leader Sir Richard Leese said: “High quality public realm spaces, that are versatile and attractive, and that can bring people and communities together, are crucial in any modern city. As Manchester grew, there was little public space available for residents, and so it is with great celebration that we can now unveil this new square.”

“Sadler’s Yard will be a true refuge in the heart of the city – providing a new walk-way through the city and a backdrop to some of the incredible development and restoration work planned across NOMA’s 20 acre site – and I hope the space becomes a gateway for residents coming from the north of the city.”