Alex Greenhalgh’s People Of The Streets initiative started as a response to a campaign in Nottingham urging people not to give money to the homeless.

“It said: ‘Don’t give money to homeless people, it goes up in smoke’. We thought that was a bit nasty and offered no alternative, so we decided we’d be the alternative,” says Bury-born Alex.

On their website visitors could buy packs of essentials including toiletries for both men and women, through an initiative that helped rough sleepers keep warm, dry and fresh. Alex and his team would then distribute the goods.

However, he shortly realised that this was only a short-term fix and it wouldn’t make a lasting impact on their lives.

“We wanted to do something more long term to help homeless people so we built a business model around it,” he says.

Alex, 22, and the POTS team worked closely with Barnabus, Lifeshare and Big Issue North over the past nine months to distribute disposable cameras to homeless people in the city, allowing them to capture photographs portraying Manchester through their own eyes.

The Stories of the Streets exhibition showcases over 250 photos taken by homeless people in the city, with money from each print sold going directly to support the individual photographer.

“My first point of contact were the organisations that they use every day and the feedback from them was great, they immediately said ‘yes, let’s do it.’

“I knew a few of them from before because we sent packs and then the individuals who took part and took the photographs, they seemed to be forthcoming.

“In terms of the public, quite a lot of people stop and engage with us, come and have a chat and seem to think our work is important which is very promising and nice to hear.”

Alex doesn’t have a favourite picture, but he does point out the one of the Town Hall is beautiful: “It has been taken by a guy called Ed Diaz who’s Portuguese and went to university not so long ago and just found himself homeless in Manchester.”

A proud Mancunian, Alex also mentions a photograph of the two bridges that have been built recently, saying he enjoys seeing the city being built up.

There are no trends in terms of what they usually photograph, Alex said, as every person went for a particular thing that had meaning to them, but what he noticed was a lot of Manchester passion and love for the city emanating from the stills.

“Some might have just done pics that are true to them and some might’ve actually gone out and taken pics of the city,” he says.

“We tend to get a mixture of famous buildings but we also get a lot of places that mean a lot to them like Barnabus and the Mustard Tree in our photographs.

“We also have insights into their ‘bedrooms’. We have someone in a tent at the moment, which is a place that we’d never usually see. There’s a mix.”

Alex hopes to take the concept across the country, which is why he and his team are currently working on improving the business model so they can successfully hand it over to other people.

“People with time like students and pensioners could pick up the model that we’re trying to create,” he says.

“We’ve been writing down everything that we’re doing at the moment and what works and what doesn’t so we can then hand it over to the people and say, ‘ok do it in Coventry or in Portsmouth’.

“I’m moving to London in August so that is probably where the next one is. Hopefully we’ll have the model ready by then because there have been a lot of hiccups with this.”

The big pictures are sold at £25 and the smaller ones at £15. Each photographer earns money from prints sold.

“So for example Omar (one of the photographers), let’s say he makes £100.  Someone at Barnabus will sit down with him and say, ok you’ve got this money, what do you need?

“Do you need a food and hygiene certificate to help you get a job in catering, or do you need some new cutlery for your flat and a kettle maybe? We don’t give out cash, we give benefits in kind basically.” 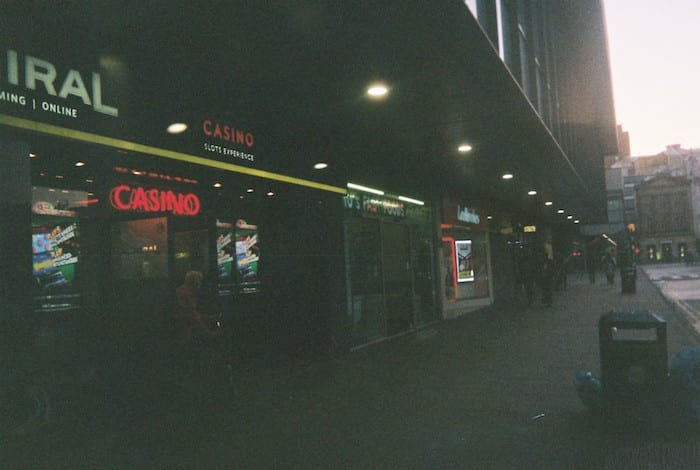 I met Omar at the exhibition, who was overjoyed to see his work displayed.

“It’s really a dream come true,” he says. He shows me a picture he took in Piccadilly, showing a casino and a few other betting places. I point out that it has an alluring dark aesthetic.

“I’m into the kind of art that depicts the true darkness of the world,” says Omar. “I think so many people go about their lives without knowing true darkness.

“It’s not all doom and gloom, though. When I say darkness I mean the emotions that we try to run away from. But they’re the ones I find interesting.”

The exhibition will run on the upper level of the mall in the Arndale Centre until Sunday 22nd July.