Who needs Michelin stars? Meet the chef who gave three back

“Why aren’t you here?” asks Marco Pierre White when I call him on the telephone.

It might have been a pretty intimidating start to an interview, given his reputation for scaring hapless staff to death in the white heat of his stellar kitchens and chucking critics out of his restaurants.

A reputation that later inspired his persona on the ITV reality cookery show Hell’s Kitchen in 2007 and 2009 and the Australian version earlier this year.

But I’ve known Marco for more than 20 years and every time we’ve met we’ve got on famously. 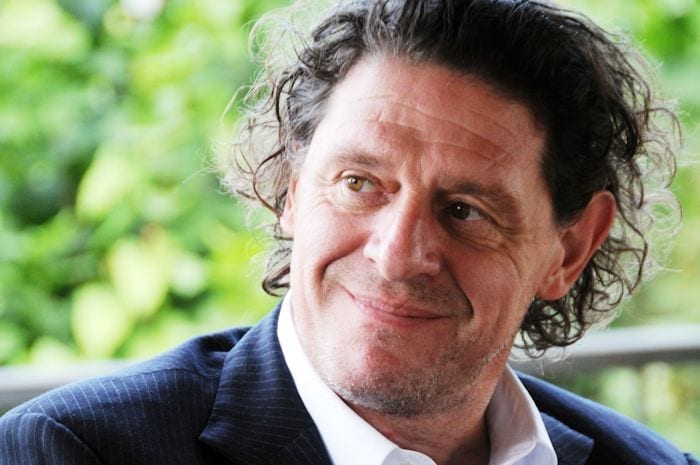 “What, the gin distillery?”

“No in a Steakhouse. And the view is wonderful.”

The Marco Pierre White Steakhouse Bar and Grill in Plymouth overlooks the Hoe where Sir Francis Drake famously finished his game of bowls before taking on the invading Spanish fleet. It’s one of more than 35 MPW restaurants across the UK under five different brands.

The latest of them is Marco Pierre White’s New York Italian, which has a branch at MediaCity serving Italian-inspired dishes and American classics in a family-friendly setting.

It’s all a far cry from the Marco Pierre White I first met when he was a 29-year rising star guesting in the kitchen of the Belle Époque restaurant in Knutsford along with his protégé David Mooney, who now runs several pubs including The Old Sessions House in the Cheshire town. (“David’s a lovely man,” says Marco. “Do pass on my regards.”)

Marco was in his whites, sporting Led Zeppelin locks, lounging in an armchair with his feet up and chain smoking Marlboro reds. We found common ground with our council estate upbringing (his in Leeds, mine in Manchester) and interest in politics.

Self-made through sheer hard work and determination – he had two Michelin stars at the time – he was an avowed fan of Margaret Thatcher. It was November 1990 and I told him she she was finished and wouldn’t survive a second ballot on her leadership. So we had a £20 bet.

He had started cooking aged 16 at a hotel in Harrogate, then at the Box Tree in Ilkley, before turning up three years later at Le Gavroche in London straight from Yorkshire with no appointment and just £7.36 in his pocket.

In 1995, he made history at Restaurant Marco Pierre White at Forte’s Hyde Park Hotel by becoming the first in Britain and the youngest chef ever to achieve three Michelin stars. He was just 33.

But by the time our paths crossed again in 2001, he had retired from cooking, having hung up his whites for the last time in 1999 and returned his three stars. We met this time at the Mirabelle restaurant in Mayfair for lunch with Sir Rocco Forte who was just about to launch the five-star Lowry Hotel in Salford and its flagship restaurant, the MPW River Room.

We’ve met several times since then at various restaurant openings and book events. During our latest chat I ask him if he still stands by a quote in which he claimed that the golden age of gastronomy which he knew, had gone.

“It’s true,” he insists. “Not just for me, but for everyone.

“Many years ago I walked into the kitchens of the Hotel St George and I feel very fortunate that I worked for chefs that were behind their stoves. Nowadays menus are written by accountants. And at the top end, fine dining has turned into canapé parties with set menus of 18 courses. Ridiculous.

“I like to put food on the plate and it’s all about provenance. At my hotel [The Rudloe Arms, near Bath] I get my grouse from Yorkshire, partridges from Hungerford, beef from Scotland, lobsters from Looe and fish from Newlyn. I like to feed people.”

I ask him about politics. He immediately turns his fire on Jeremy Corbyn, slating the Labour leader’s support for striking McDonald’s workers.

Eventually I manage steer him round to the subject of New York Italian, billed as being inspired by Marco’s Italian heritage (his mother came from Italy) and his love for New York. So what does he love about the Big Apple?

“New York is one of the great eating cities of the world,” says Marco. “They are brilliant at the middle market. Good honest food, good service and great environment – funky, rock and roll. The Americans only get it wrong when they try to be posh.

“New York Italian is about family. It’s about a good night out. Something simple, at a price point and to a standard that I’m happy with.”