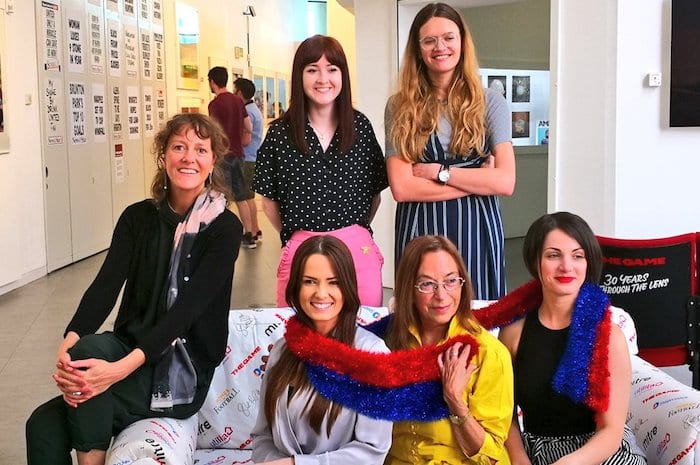 Six ground-breaking female photographers will have their shots of the beautiful game on display for the next three months as part of The Game, Stuart Roy Clarke’s latest exhibition  at the National Football Museum.

Women Behind the Football Lens, which launched this week, features six female photographers – Hy Money, Victoria Haydn, Amy Drucquer, Abbie Jennings, Adrienn Csepelyi and Jessica Hilltout – who came together for the exhibition launch to talk about their involvement and reflect on their experiences of football from behind the camera.

The work of Adrienn Csepelyi and Jessica Hilltout depicts football culture on an international scale, whilst Amy Drucquer, co-founder of online community platform This Fan Girl,  explores the experiences of female football fans in this country.

“This Fan Girl was set up as an online content platform to encourage women to speak about football,” said Amy. “It began over the Euros 2016 and has gone on to document the work of female football fans.”

Victoria Haydn is senior club photographer with Manchester City whilst Hy Money, who trained as a secretary shorthand and typist, was the first female photographer to break through the ranks of the sport.

When her young son once asked her to go to “the palace” with him, she assumed he meant Buckingham Palace. In fact, he meant Crystal Palace.

Though initially daunted by the idea of the crowds and the intensity of a football match, Hy was entranced by what she saw on the pitch.

“It was magical,” she said. “Like what my boys were doing in the garden. But this was real life.”

Following her first Crystal Palace match experience, she knew she had to photograph what she saw. To do this, she needed access to the edge of the pitch. When her phone calls and requests to the club were repeatedly ignored, she persisted and visited the club in person.

Being there “at the right time, with the right name and the right cheek,” Hy persuaded the the club to let her have access. Her love of football photography “went from there,” she says.

“I felt so emotional… I felt like I was at home here,” she said, describing how she felt about being at the National Football Museum. “I’ve spent my photography career hiding behind a camera, so I find this kind of thing scary!”

Stuart, himself a photographer recognised widely for his work in football including The Homes of Football, was so keen to include them at the heart of his latest exhibition for a good reason.

“Women are football fans, commentators, players, directors and photographers,” he said.  “They are, and always have been, an integral part of the game. And yet they continue to be under-represented in football.”

The exhibition is a chance to see work which is ground-breaking in its own right. These photographers provide a refreshing perspective on the game and its culture as well as celebrating women’s involvement across the sport.

“We are proud to be placing some of the sport’s immensely talented photographers – including one of our museum team, Abbie Jennings – at the forefront of exhibitions like this, reflecting the diverse pool of talent working within the beautiful game.”

Women Behind the Football Lens is at the National Football Museum until 15 August 2018.