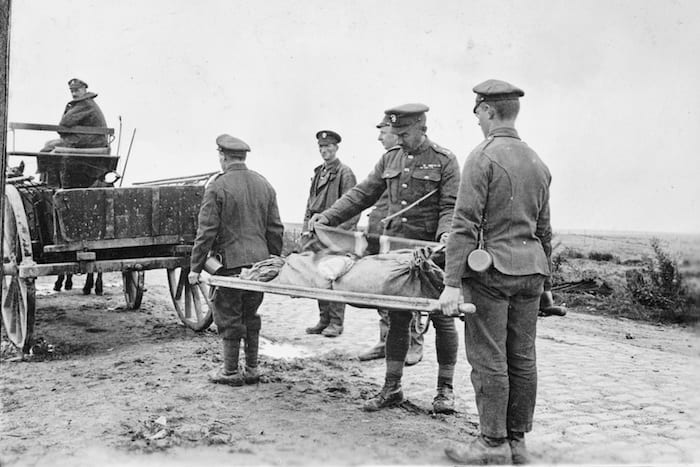 One hundred years after the guns fell silent, remembrance of the lives lost during the First World War remains a poignant and moving subject.

While many parts of the Imperial War Museum North display artefacts and information relating to the war’s many battles, its new exhibition Lest We Forget? focuses on remembrance and how it has been observed in the intervening years.

It begins with the efforts taken by the British Army to bury and commemorate the fallen, including the 559,000 British and Empire casualties with no known grave.

Documents and photographs tell of the controversial decision not to repatriate the dead, instead creating vast war cemeteries in northern France and Belgium. Artefacts include a rose that fell from one of the huge wreaths on the coffin of the Unknown Warrior as it was carried onto the quays at Dover in November 1920 on its journey towards Westminster Abbey, where it represents those soldiers whose bodies were never found.

The rose was retrieved by a dock worker, William Chandler who sent it to his nephew Harold Aldin, whose father had been killed during the war.

The exhibition paints a picture of national mourning, from grand displays to personal memorials. It explains that poorer British families often kept loved ones’ everyday possessions, returned to them from the front, along with keepsakes such as the Dead Man’s Penny issued to the next of kin of every man killed.

Displays include a pipe, cigarette case, identity tag and other personal effects donated by the family of Albert Tattersall, who was killed after joining the Manchester Regiment with his two brothers. A memorable photo captures a munitions worker displaying her forearm, tattooed with the name of a man killed at the front and a subsequently added cross design.

The long back wall of the gallery is mounted with a collection of war paintings. Most striking is John Singer Sargent’s Gassed, a huge canvas from March 1919 depicting a line of soldiers making their way to a dressing station following a mustard gas attack.

Other evocative works include George Classen’s Gun Factory and Henry Tonks’ Advanced Dressing Station. Tonks served with the Medical Corps and subsequently toured the Western Front as an official war artist with Sargent in 1918. The two witnessed a field of injured men in northern France which formed the basis for Gassed.

These contemporary works evoke immense poignancy and, with many omitting battle scenes in favour of the aftermath, portray both the scale of loss and destruction, and the great suffering of survivors.

The exhibition includes a section on casualties and remembrance across the Empire. Large numbers of these men fought in arenas around the world, whilst many others were only allowed to serve as unarmed support personnel.

A display including an interactive map details the losses from countries including South Africa, India and Ireland and the memorials erected, sometimes belatedly by many years.

Although the poignancy of some displays and artefacts may be better contemplated by an adult audience, there are pieces to interest children.

Particularly engaging are likely to be the personal possessions and the wall devoted to more instantly recognisable symbols today, such as the poppy. Mounted here is a match shirt worn with a red poppy embroidered on the front worn by Manchester United’s Juan Mata in 2014.

Alongside it are other examples of remembrance in popular culture, including the manuscript of Sebastian Faulk’s Birdsong, a puppet from the stage show War Horse and other pieces from music and film.

Lest We Forget? is part of Making a New World, a season of events at IWM North and IWM London. Also showing at intervals in IWM North’s main gallery is Mightier than War, a combination of poignant imagery projected onto the walls and the powerful spoken word poetry of Tony Walsh.

Although the century following the end of the First World War draws to a close in a few months, it is difficult to leave the exhibition unmoved by the scale of loss and suffering wrought.

Just before the exit, visitors are asked whether we should always remember the First World War, choosing from four options on the wall.

My answer? An overwhelming yes.