Men United: why MUFC’s LGBT partnership has everything to do with football 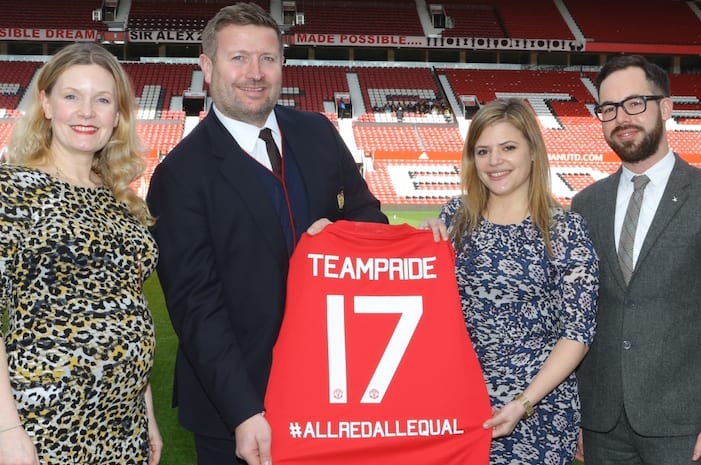 Yesterday, Manchester United announced on their website that they would be partnering up with LGBT inclusion charity, Stonewall, making it a first for UK football. The ground breaking initiative will see the club work alongside the charity in order to help tackle LGBT issues in sport and society while looking for ways to promote equality within the game.

Having initially teamed up with the charity last year for their Rainbow Laces campaign, the club will continue to promote equality as part of their ongoing pledge with Stonewall, including hosting the Rainbow Laces summit at Old Trafford later in the year.

It is hoped that United’s popularity will help bring attention to the cause on the global stage.

The club’s group managing director, Richard Arnold, said: “The club has an ongoing commitment to equality across all areas and, with 659 million followers around the world, it is our responsibility to show support and recognition to everybody who loves this football club.”

While most people celebrated the partnership, for some followers this isn’t the kind of cause they want their football club to be associated with and they were quick to voice their discontent on the club’s social media pages.  Some argued it had ‘nothing to do with football’ and that ‘politics’ should be left out of the ‘beautiful game’.

Herein lies the problem. If you continue to ignore the issue and move it away from public domains such as football matches, the less likely it will be for people to be accepting of something that is still considered to be ‘wrong’ by some. This is why United’s announcement is so important.

With an estimated 3.5 billion fans, football is by some distance the most popular sport in the world and therefore has considerable pulling power. This makes it a powerful platform to promote respect, equality and inclusion, whether that takes the form of anti-racism, anti-sexism, or indeed, anti-homophobia.

But with so much vitriol over the announcement, it begs the question that if one of the world’s biggest football clubs can be criticised for partnering with an LGBT foundation, what hope is there for others who may wish to come out as openly gay in the future?

Justin Fashanu, the English forward who became the first openly gay footballer after coming out to the press later in his career, was the target of constant crowd abuse. Many of his former colleagues spoke out in anger against him, stating that gays had no place in a team sport, while his own brother John publicly disowned him – an action he later regretted.

In 1998, following allegations of sexual assault on a seventeen-year-old in the USA, Fashanu returned home to London where he was later found hanged.

In his suicide note, he denied the charges, stating that the sex was consensual and that he had fled to England because he felt he could not get a fair trial because he was gay, saying: “I realised that I had already been presumed guilty. I do not want to give any more embarrassment to my friends and family.”

Manchester United aren’t the only institution to have experienced these issues. These kinds of remarks have plagued both sport and society as a whole for a number of years and while efforts have been made to change public perception of the LGBT community, there is still much room for improvement.

Speaking at a FIFA Conference for Equality and Inclusion, former footballer Thomas Hitzlsperger explained the importance of coming out as gay.

He said: “Footballers are role models and when they speak up they make a change […] there are so many people out there who don’t understand that it’s not easy growing up as a gay kid and not being able to talk to your family.

“I wish it [coming out] wasn’t an issue but unfortunately it is, and as long as it is people need to stand up and say they are gay and encourage others so that hopefully one day it won’t be [seen as a problem].”

Despite negativity and hate, there are still plenty of encouraging signs in society. Just last week we saw Moonlight, a chronicle of a gay African American growing up in the rough neighbourhoods of Miami, win Best Picture at the Oscars. But of course, for every step in the right direction there seems to be more stumbling blocks along the way.

Until society meaningfully grapples the distorted representation of homosexuality, these negative reactions will continue to happen and the value of LGBT lives will continue to be reduced in the eyes of millions.