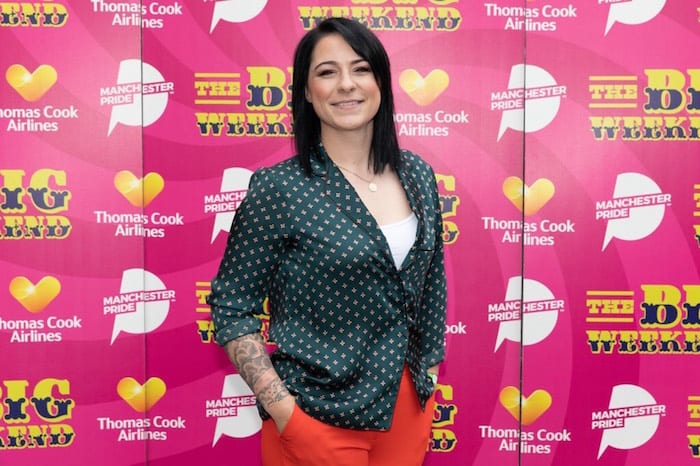 Singer-songwriter Lucy Spraggan became a household name after appearing on The X Factor in 2012. She quit the show due to illness and subsequently made it to ninth place.

Since then, she has carved out quite the career for herself as a musician. Known for writing her own songs – her most well-known are probably Tea and Toast and Last Night – what makes her so endearing is her unique style of telling stories through her music.

We caught up with Lucy during Manchester Pride’s Big Weekend, where she was performing for her 10th year, to find out all about her upcoming international tour, her new music and  Manchester.

This is your 10th Pride. How has the experience changed over the years?

I started off literally under a little tarpaulin in one of the car parks – they don’t even use it anymore as a stage. Then I performed on the back of a flatbed truck one year. I’ve played every stage and it just feels weird. I feel like I’m not old enough to have done anything for 10 years but I have. I’m old now.

What does Pride mean to you?

Pride for me is just about being open and accepted where you live – whatever country that may be. It’s about showing other countries that aren’t quite up-to-date with equality and diversity that this is how it should be. And it works. It really does work. All across the country you see communities coming together. Just driving in today I saw Costa Coffee had a Pride sign and they’ve changed the green and red man on the street to Pride symbols.

You’re a Pride ambassador. What does that entail?

I’ve actually got a meeting in October about what the charity stuff is going to entail but I’m really looking forward to getting involved properly. I believe there’s going to be a lot of fundraising and spreading awareness. I actually don’t really have a clue yet what I’m going to be doing properly, but I will do soon.

Tell us about your new tour

I leave in a week to start my tour in Toronto and then we’re going across the States for a whole month which I’m really excited about – but also in shock because we’re playing in places that I haven’t even been to before, so it’s all really exciting. And then I’m back in the UK for a 10-date tour – they’re some of the biggest headline shows I’ve ever done in the UK – and then we’re off to Europe in November. I’ve never been to Canada and my Toronto tour date is nearly sold out so for me that’s just crazy because I’ve never even been to the country.

What’s your favourite song off your upcoming album?

The one that I’m writing at the moment. It’s a song called Dinner’s Ready which is about my mum. It’s not a sad song but it’s definitely quite emotive. From my last album I Hope You Don’t Mind Me Writing, I think my favourite song is probably Freddo’s Aren’t 10p.

Do you keep in touch with any of your fellow X Factor contestants?

I speak to Rylan sometimes and Ella Henderson – and I speak to Jahmene a bit. But that’s about it really. Five years is quite a long time, and you kind of just fade out of contact with people – especially if you never really liked them in the first place.

What’s been your career highlight so far?

It’s a bit of a cliché but I played at Glastonbury last year and it was absolutely unbelievable. The tent was completely full and I cried afterwards, so that for me has got to be one of my biggest highlights.

If you could collab with any artist who would it be?

Scouting for Girls because I’m doing a duet track with them. We’ve just filmed the video for it, and it went really well. The single comes out on the 7th September. It’s called Stick the Kettle On and it’s kind of a tongue in cheek song but it’s very pop heavy and it’s about mental health awareness – about sticking the kettle on with your friends and just having a chat and making sure they’re ok.

Which is your favourite place to hang out?

The place where I always end up is G-A-Y. I don’t even know why but that tends to be our go-to. And I love The Molly House and Canal Street No.1 – and they’re dog-friendly, so that’s a win.

More dog-friendly places. The Northern Quarter has a row of dog-friendly bars and then it just finishes. I just think the whole world should be dog friendly.

I love the feel of Manchester, the fact that it’s all quite close together but also quite spread out. You can go into any kind of place and feel accepted. It’s just a nice place to be and everyone’s very friendly.