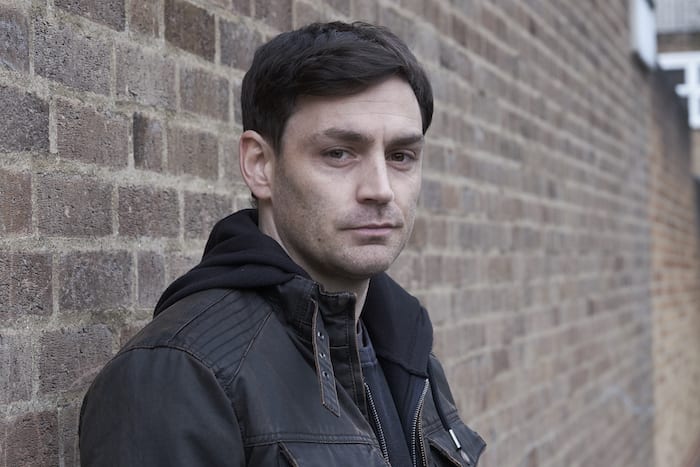 Matthew McNulty has spent the last few years in period dress for TV dramas like Jamaica Inn, The Mill, The Musketeers, The Terror and Versailles.

No wonder he’s been waiting for an opportunity to chuck on a pair of jeans and look a little less hirsute for once. So his latest project is just what he was looking for – and not just because he could ditch the big hair.

In the new six-part ITV drama Cleaning Up, he plays Dave, the estranged husband of Sam, a cleaner on a zero hours contract in the City, played by Sheridan Smith. She has an online gambling addiction and spiralling debts and spots the potential to make money by gaining insider trading information.

“It was a good script and just happened to be a breath of fresh air because it’s back to the real world,” says Matthew, 36.

“For Versailles, I had long hair and for The Terror I had massive sideburns, so it felt like I hadn’t looked contemporary for ages,” says Matthew. “I do love period drama but then it’s nice to do something where you don’t have to sit in the make-up chair for an extra half hour,” says the actor, who lives near Bolton.

In Cleaning Up, Matthew is the husband who cheated and left but wants to do what’s right by their two daughters and by Sam – even if she doesn’t want to hear it.

“He’s a nice guy ultimately and a good dad but he’s put in a really bad position from Sam’s gambling and from the strain on their relationship,” says Matthew, himself a dad of two.

“When you meet Dave, he’s probably at a maximum level of frustration with Sam. And it’s a shame because they’re a good couple. But Sam’s addiction and deception tears them apart.”

He and Sheridan share a shorthand from working together on 2015’s Black Work.

“She’s naturally charismatic, and just a fun person to be around. She’s intelligent, witty, and professional as well. Anyone working with Sheridan feels comfortable because she has that way about her,” says Matthew, who believes viewers will sympathise with Sam’s predicament.

“I think they have to really. She does make some bad decisions, but everyone does. Nobody’s perfect.”

Some people are claiming Cleaning Up is making a political statement, but Matthew doesn’t believe that’s the aim of newcomer Mark Marlow, the man who created the series.

“I think that’s a by-product of an entertaining drama – which is what Mark set out to do. But I suppose there are political undertones in the subject matter with the City and cleaners and Sam’s position in both worlds. It’s about the difference between the haves and have-nots, and people who are there but not seen,” he says.

Having filmed abroad a lot in recent years, Matthew appreciated the relatively easy commute down to London for filming.

It was even simpler for The Bay, a police drama for ITV he recently wrapped.  Although set in Morecambe, it was shot predominantly in Manchester and marked the first time he’s filmed on home turf since Channel 4’s The Mill, which was based at Quarry Bank Mill.

“It’s so nice to feel like you’ve got a normal job. You wake up, go to work, come back, and sleep at home,” he says.

“It’s exciting because it does feel like there’s a lot going on in Manchester and it’s great we’ve got a bit of a hub now in the north west. We can show people it’s not impossible to get into this industry unless you’re from London because that’s what it felt like when I was starting off. I thought if you’re not in London then you don’t have a chance. But then I got lucky.”

Matthew was later spotted during a showcase at the Royal Northern College of Music and asked to play Dave Smith, Myra Hindley’s brother-in-law in 2006’s See No Evil: The Moors Murders.

“Through getting that job I ended up getting a good agent and I started getting more work without having to pimp myself out,” says Matthew.

Growing up he didn’t know anyone in the industry. “I never shouted from the rooftops that I’m going to be an actor”, he says.

“Obviously, I wanted to and that was underneath everything, but you can only say you’re an actor if you’re doing it. I still don’t really understand the industry, and just take it as it comes really.”

Looking to the future, Matthew’s priority is to keep working.

“But if I had the choice, I want to do something really cheesy and fun, like a musical,” he says. “Generally, I’m quite reserved, but I know when I’m performing or acting, it brings out so much more.”