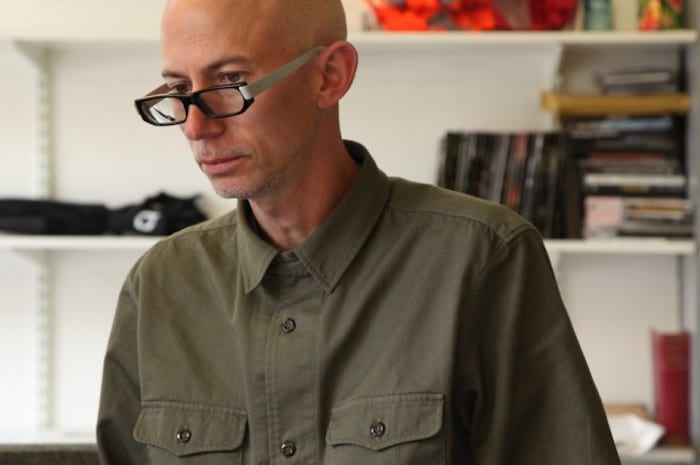 Jason Wood is artistic director for film at Manchester’s arts hub, HOME. He is passionate about cinema and has worked at Picture House and Curzon Cinemas. He has written for The Guardian, Sight and Sound, Vertigo and SoFilm and holds professorships at Manchester School of Art and the University of Salford.

We caught up with him to find more about his role, what we can look forward to at HOME, and what he loves about Manchester.

Can you explain your role at HOME?

I’m responsible for the film programme and the cross-art projects that involve film, theatre and visual art. The film programme is comprised of new releases and HOME curated seasons and collaborative film seasons involving third party curators and other institutions and venues. The film programme also incorporates various stand-alone events, such as live musical performances to accompany silent films and touring titles from the likes of the UK Jewish Film Festival, The Japan Touring Foundation and many more. We have a number of high profile film signature seasons that occur each year, examples of these include VIVA! and the Manchester Animation Festival. I also host the majority of the Q&A film events that we hold at HOME, co-host the monthly film podcast.

How do you select films to screen for audiences?

There are various criteria which include, does the film have appeal for an audience? Does it correspond to a specific film season or moment in history (eg October’s Black History Month or International Women’s Day)? Does it in some way further the boundaries of cinema and to issues of diversity (social, racial, political, economic, sexual)? Is it a film that provokes discussion and debate? Is it a film that presents an alternate perspective to dominant social or political ideologies? Will it encourage new audiences to attend the venue? Is it a film that may be impossible or difficult to see elsewhere? And, is it specific to the region (we like to showcase the work of local filmmakers and frequently play their shorts before main features)? Lastly, does it support both emerging and established filmmakers of distinction?

Your job must be a film lover’s dream role. Is it?

It is. I’ve worked in the independent film sector for 20 plus years as both a curator, a distributor, a journalist, an author, a teacher and even as a filmmaker. It’s a privilege to do a job like this but it does come with certain pressures and responsibilities and for all its many pluses and pleasures it can have its rough edges. But I get to travel and see an incredible array of film and then share it with Manchester audiences. I also get to work for an organisation with a philosophy I very much believe in (everyone deserves access to culture) and with some great colleagues.

You have done many Q&As at HOME. Which have been your favourites?

I can genuinely say that I have enjoyed them all. John Boorman is one of my filmmaking heroes so it was great to discuss his career with him when HOME first opened. The same can be said of Carol Morley, one of our very first guests. Whit Stillman is another figure I admire and he was such a pleasure to have here.

It’s a very impressive list of directors we have had but it’s also important that we have been involved in supporting a genuinely diverse group of filmmakers and I feel that we are inextricably linked to an exciting new wave of independent British filmmakers whose work we all showcased at a very early stage.

What are your proudest achievements at HOME?

I’m proud of the fact that the venue is such a success and that it genuinely aspires to be for all members of the community. The film programme has shown year on year growth in terms of attendances, box office revenue and in terms of the amount of films that we have screened. And I am thankful especially to the BFI for their support in this.

We have also increased the number of screenings that we do with audio captioning and continued to attract great writers, directors and actors to talk about their work. I think we punch well above our weight but we have also done this with relatively little compromise. The film programme, as with the rest of the art that we showcase, is very much independent in spirit and production, and we have proved that by being led by culture and not purely by commerce you can still attract very large audiences.

Having lived in London and now Manchester, do you feel that film here gets the coverage it deserves?

No. Nowhere near. And, along with my co-curators at other regional venues I have been very vocal about this. I have a letter published on this matter in the latest edition of Sight and Sound.

Which film would people be most surprised that you enjoyed recently?

Thor Ragnarok. It was very witty and didn’t take itself very seriously.

What films can you recommend to audiences over the next few months?

Marlina The Murderer in Four Acts (opens this weekend) is an exceptional western with a feminist edge. The Old Dark House is a restoration of a too little-known James Whale horror classic. Lean on Pete is the latest from the brilliant Andrew Haigh and there is also the truly incredible The Breadwinner from Nora Twomey, an animated tale from Afghanistan. I also recommend Zama, from Argentinean director Lucrecia Martel, which is accompanied by a Martel season. Other highlights include a documentary, The Slits (including a Q&A with Tessa Pollit), and a compilation of Palestinian shorts. This month also sees the launch of VIVA! which boasts 19 new films from Spain and Latin America, including nine UK premieres and six director Q&As. VIVA! takes over the whole building so it’s a great time to visit with all the family.

I like that it is very responsive to culture and it feels like a city that cares about its people. That much was very clear after the Manchester bombing when there was an outpouring of compassion and unity. I also like that it is such a creative and innovative city with a can-do attitude. In both a historical and contemporary sense I like its ethics and association with socialism and the working class. It’s also relatively affordable and easy to navigate in terms of transportation. As someone who likes directness and straight speaking, I also like that its citizens are not afraid to speak their minds. They tell me what they think, and I tell them the same back.

And which are your favourite places?

The Whitworth is exceptional, as is Manchester Art Gallery. For eating and drinking I really like the Northern Quarter, which feels like Shoreditch in its early days before the hipsters took over. The Northern Quarter also has one of the great UK clothes shops in Oi Polloi and the brilliant Deadstock General Stores for all your home needs. I’m a record collector and you’ll often find me in King Bee in Chorlton. There are almost too many great music venues to mention: Gorilla, The Deaf Institute, The Soup Kitchen and The White Hotel in Salford. Manchester School of Art and The University of Salford are also Manchester Institutions I very much admire and yes, I know Salford is not technically Manchester. I learned this from the television days of Anthony H. Wilson.