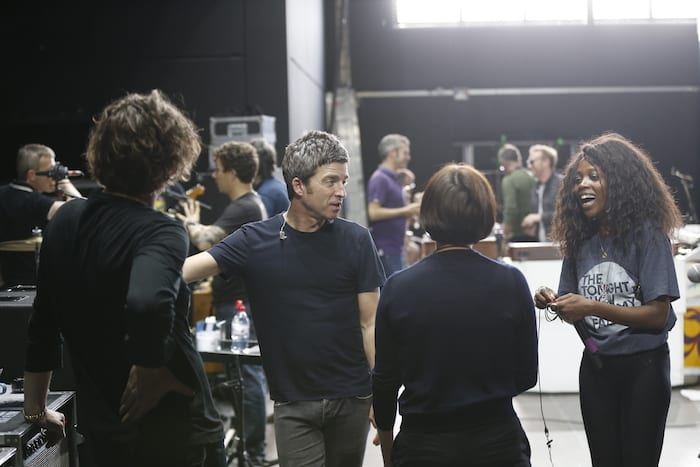 She snapped thousands of pictures as they travelled across America, Europe and Asia – but there’s one particularly candid shot that’s her favourite. It’s of Noel warming up in a toilet ahead of a gig.

“It was in Houston, in a beautiful old theatre, but there was hardly any room backstage and he didn’t have a dressing room of his own,” recalls Sharon.

“I could hear him singing and he was strumming away, and I wondered why it was so echoey. I looked around and the door was open on the toilet. He didn’t see me, so I just snapped it.” 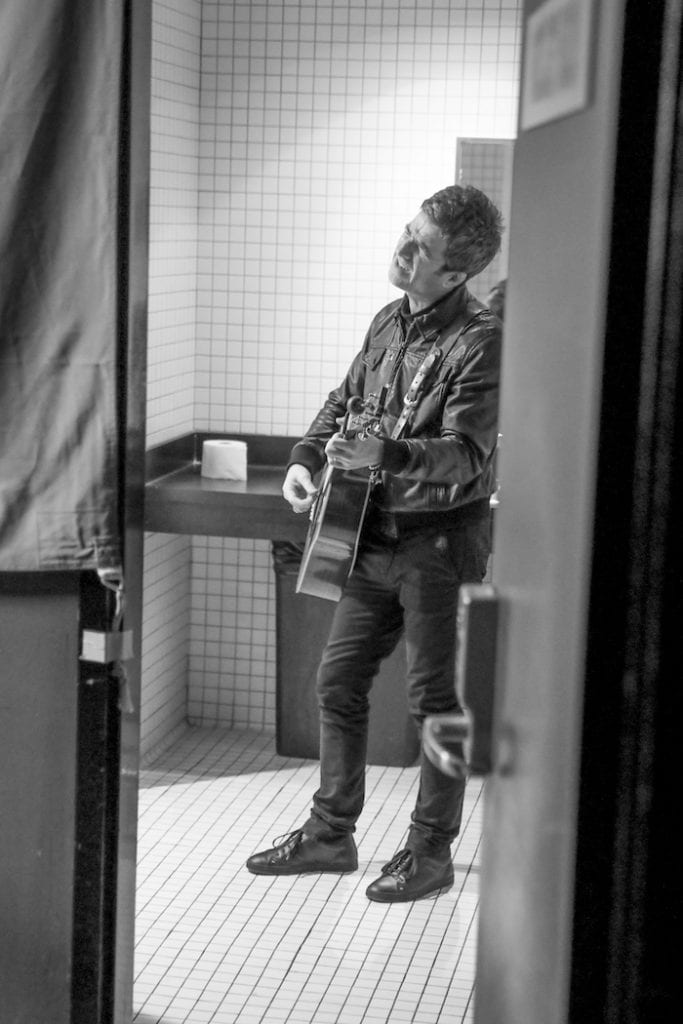 Noel initially objected to the picture being put on social media, but when going through images for a new tour book he asked Sharon if there were any photos she was going to fight for.

“I said, ‘Yeah, the toilet one, it has to go in’,” she says. “The thing is Noel’s so famous and everyone sees him as his rock icon but he’s still a consummate professional who’ll do everything to make sure the concert’s the best it can be.”

Sharon had only intended to join the tour for two weeks “but then Noel and I were looking through the photos and I said, ‘Mate, it looks like you’re having so much fun, anybody would love to be on this tour with you’ and we started talking about doing a book”.

She stayed on the road, shooting soundchecks, live gigs and backstage life. 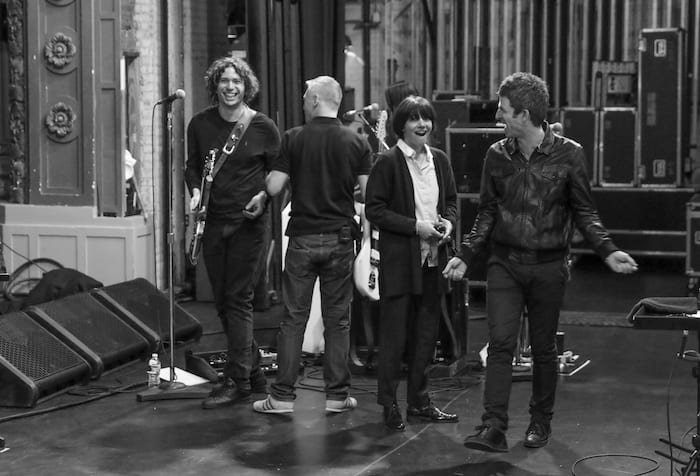 “I tend to read the moment, so I’ll use a long lens or hide behind an amp. People forget you’re there and it just opens everything up for you.”

Noel was keen for the compilation to be celebratory.

“He said, ‘I know I can be moody, but this is the best job in the world, why don’t we show people what it’s like’ and that’s the whole ethos of it,” explains Sharon who always had the fans in mind.

“They’re just epic and it’s nice to be part of the community so I was thinking, what would I want to see?” 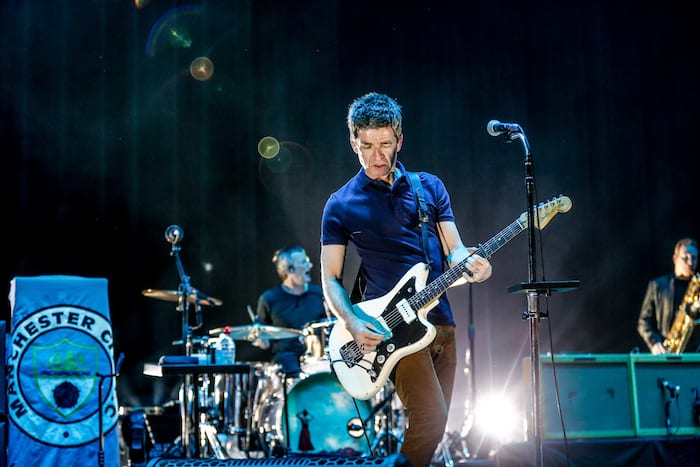 Sharon was a huge Oasis fan when she met Noel through her work as Manchester City’s photographer.

“The first time I met him, I was taking his photo with Carlos Tevez and his eye angle wasn’t quite right, so I turned around to him and said, ‘Are you looking at my t**s?’ And he just burst out laughing.”

The banter continued. “It takes a lot to offend me and he’s the same. He’s not a sensitive soul. I love the fact he can take the p**s out of himself and he’s a grumpy bastard, but he also has the most kind and generous nature, and he’s incredibly funny,” says Sharon.

Born in Horwich, her passion for photography was inspired by her dad who “never didn’t have his camera around his neck”.

“He died when I was quite young so that was my connection to him and I just stuck with it. There’s hardly been a day since I was eight when I haven’t taken a photograph.” 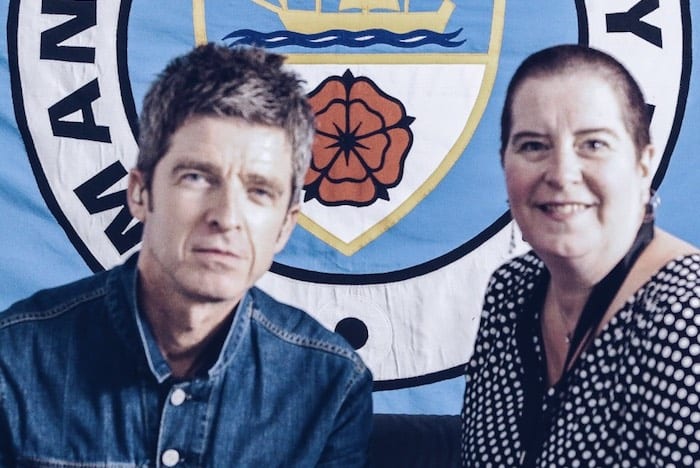 But the realities of life meant she couldn’t focus solely on photography for a while.

“I got married really young and got pregnant really early and suddenly I’ve got three kids to feed but the only thing I loved doing was taking pictures.”

She’d get her fix photographing acoustic nights and local bands when she could, along with sports teams.

“Then I was ill with cancer and had this terrible car accident. I was in a wheelchair and couldn’t walk. My confidence went, and I was really down so a friend of mine said, ‘You have to get back into photography’ and suggested I volunteer at the Manchester International Festival.”

Her photos were picked-up, along with her spirits, and through her contacts, Sharon began freelancing for Manchester City.

“It was home games and then PR photos with new big players, and then in 2010 I got taken on full-time. I still think about the trophies that were won. It was just amazing to capture those moments in history.”

In such a male-dominated world, she admits there’s been sexism “but because I’m quite a big, brash, in-your-face person, I don’t think it was quite as tough for me,” says Sharon.

“You have to give as good as you get because Jesus Christ, the banter… I tended to have the attitude that it didn’t matter if you’re a bloke or a woman, as long as you’re doing job well. I never played the woman card.” 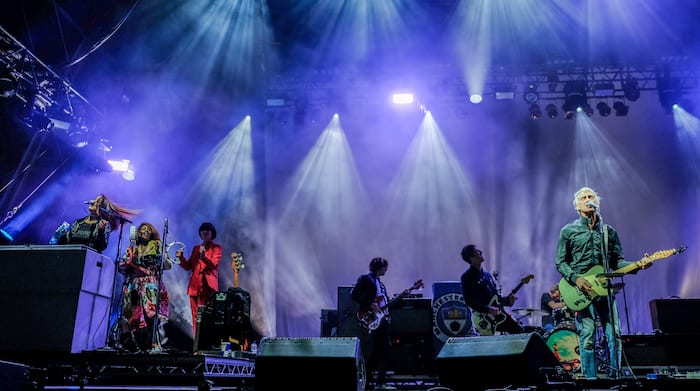 Along the way she’s met Tom Cruise (“He was lovely but so small and I’m 6ft1in”), photographed Paul Weller and bands such as Coldplay when they played at the Etihad Stadium, and thought Bruce Springsteen was her son, also called Bruce, when he called her out the blue to thank her for her work.

But for Sharon, nothing tops meeting Bradley Cooper at an LA gig earlier this year. “I don’t usually get fazed but it was a social environment and you’ve got Bradley looking and smelling the way he does. People will go, ‘But you know Noel’ and I’ll say, ‘Yeah, but it’s just Noel and not quite the same.”

Sharon left Manchester City in 2016 when Pep Guardiola came in as manager.

“I’d worked with Mark Hughes, Roberto Mancini, Manuel Pellegrini and just thought if I’m going to leave, it’s best to leave now and give someone else a chance to get to know a new manager and background staff.”

It meant she could focus on The Selfie Guide, an app that helps people shoot the perfect selfie in 22 locations across the world, which she’s keen to expand.

“I love the fact that people love photography and I love the fact mobile phones makes it more accessible,” says Sharon who still gets a buzz from capturing life through a lens.

“Photography was originally a connection with my dad but over time it becomes part of who you are. I see the world in pictures and I can’t imagine not doing it.”

The book Noel Gallagher’s High Flying Birds – Any Road Will Get Us There (If We Don’t Know Where We’re Going) is out now, priced £20.