Meet the artists behind Bee in the City: Hammo

Nick Hamilton, or Hammo as street art lovers know him as, decided to get involved in Bee in the City after his friends suggested it might be something he’d love.

“I thought it looked like a really fun challenge painting on something that had a weird 3D shape as most of my painted work is on flat surfaces. Then there’s the added bonus of these bees being sold off for charity at the end. I thought that was great,” he said.

Hammo painted two bees, one for New Bailey and one for Ellis Brigham, and although the two designs are very different, they both illustrate Mancunian values: positivity and resilience.

The New Bailey bee concept is based on a mural Hammo painted last year, in light of the Arena attack, when local artists congregated in Stevenson’s Square to try and spread some positivity with colourful paint. 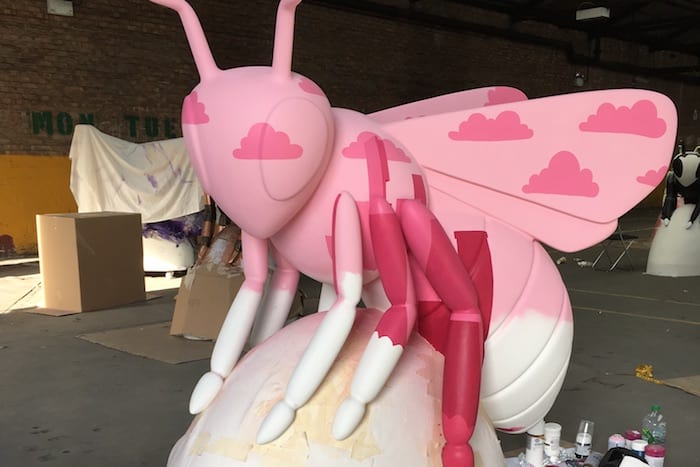 “We thought it would be nice to repaint the square,” he says. “Everyone felt like we should do something because we were all feeling a bit helpless at the time so we wanted to spread some love.

“My design there was a pink heart-shaped Manchester skyline with a white background so I thought it would be nice if my bee reflected that.

“So the bee is covered in a pink Manchester skyline with various landmarks that people might recognise, and the base of it is wrapped with various characters that represent the community’s diversity in Manchester, lots of smiley faces to keep it alive and positive.”

The second bee Hammo designed tells the story of Benny Rothman, a Manchester activist who organised a mass ramble in 1930 against the government’s decision to deny ramblers access to parts of open country.

“Benny led these 400 ramblers on this walk around in sort of a mass act of civil disobedience and this led to people getting their right to roam on public land,” says Hammo.

“So this bee is called now called Benny. The base of the bee shows the route the ramblers took and the top of the bee is a rambler.” 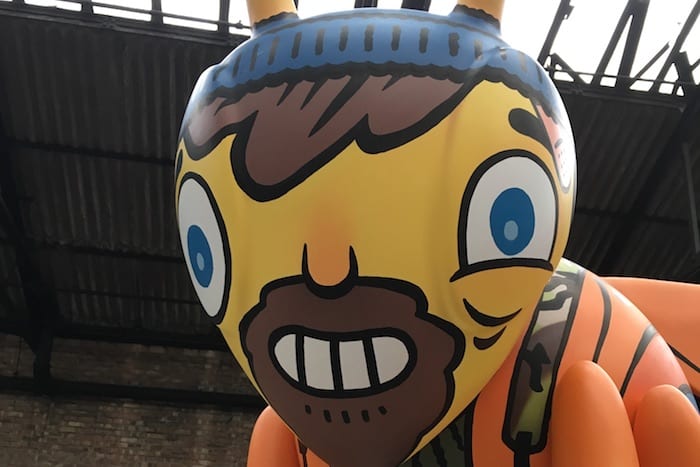 Hammo said that he lost track of time while working on his bees and that the sculptures’ fiddly shapes made painting quite challenging. But sharing the work space with all the other artists involved in Bee in the City was an amazing experience as they have been able to bounce ideas off each-other.

“There was a really nice atmosphere in the warehouse where all the artists were painting and it was a great feeling of camaraderie,” he says.

“I’ve had a few sneak peeks but I’m really just looking forward to seeing all the bees all out on the streets.

“There have been a couple that have been placed here and there for various events and I think they just look really striking when they’re outside.”

Hammo has always liked to draw and has now been a self employed illustrator for almost 13 years.

“It’s probably thanks to Sketch City, a night in Manchester a few years ago when a bunch of artists got together in the Contact Theatre. And it stemmed from there really. Each mural job seems to lead on to another mural job.”

Despite what might be the common misconception, there is actually a lot of precision that goes into mural painting, he explains.

“I try to get really fine lines and clean colours to keep it as precise as I can. I’m still learning though, every time I paint a mural I feel like I’m slowly getting better at it but there are so many different techniques and stuff I’ve not mastered yet.”

The artist says that he feels extremely happy to be able to do what he loves for a living, and the fact that other people “seem to like it” is just an added bonus.

Art lovers can watch Hammo work his magic live on 26th July, as he will be painting a mural at a street food event hosted by New Bailey to celebrate their bee reveal.

By sharing your experience of the Piccadilly area, including Piccadilly Gardens, you can help shape its future