Mayor Burnham makes his mark in baptism of fire 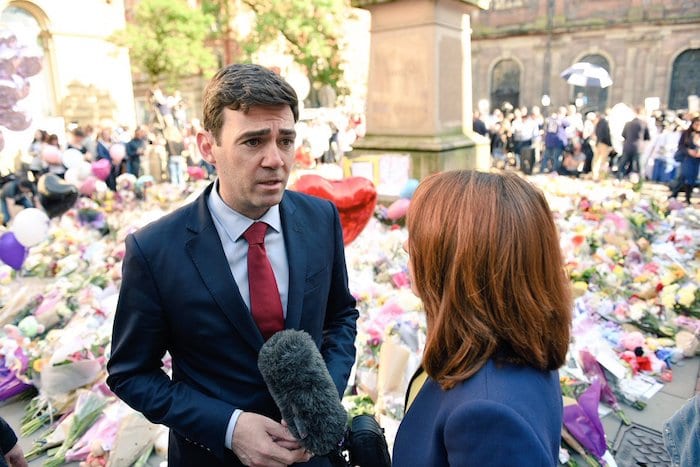 In an astonishing and tragic parallel separated by 21 years, Manchester’s two most prominent politicians of the last twenty years have begun their leadership careers in a baptism of fire.

For Andy Burnham, only 17 passed between his election as Greater Manchester’s first executive mayor and suicide bomber Salman Abedi’s appalling act of callous mass murder in the foyer of the Manchester Arena.

Even as the stricken city centre lay in ruins after the IRA bomb, Sir Richard promised that Manchester would emerge from the devastation better than before. Fit for the 21st Century.

Mr Burnham has had to deal with a far more difficult narrative. This time the terrorist outrage has left many shattered families of the dead and critically wounded for whom no gestures of defiance, solidarity or resilience can assuage their agonising grief.

This has been our darkest hour but I’ve seen the best of Greater Manchester this week. #bbcqt @bbcquestiontime ❤️🐝 pic.twitter.com/aqQRvZiqlZ

It’s usual to assess the performance of new leaders after 100 days in office. But events have moved so swiftly in Manchester since Monday that it’s opportune to look at Mr Burnham’s start as mayor after just 21. He would not have wished it this way, but it’s been an impressive debut under relentless pressure.

Like Sir Richard before him, who made it a priority after the IRA attack to visit the Irish heritage centre in Cheetham Hill, Mr Burnham has sought to be conciliatory with Manchester’s Muslim community. As before, there has been no significant backlash despite the anger and outrage over Abedi’s deliberate and calculated targeting of young girls and their parents leaving Ariana Grande’s concert.

In a televised interview after the murderous bomb attack he said: “We won’t let this act of terrorism divide us from one another. Those who would like to make it all the responsibility of the Muslim community well, I’m afraid that is wrong. This is an extremist act and the person who did it in no more represents the Muslim community than the person who killed Jo Cox represents the white Christian community.”

In a measured, thoughtful post on twitter he wrote: “People who use this to push hatred are doing exactly what the terrorists want. Division and hate make us weak; unity and  resolve make us strong. It’s an act of extremism and people need to remember that at all times.”

The spotlight has been constantly on the new mayor since his first speech outside Manchester town hall in the immediate aftermath of the arena bomb. It was an eloquent response in the most harrowing of circumstances.

“After our darkest of nights,” he said, “Manchester is today waking up to the most difficult of dawns. It’s hard to believe what has happened here in the last few hours and to put into words the shock, anger and hurt that we feel today. These were children, young people and their families that those responsible chose to terrorise and kill.”

His fulsome expression of thanks to the people of Manchester who, “even in the minute after the attack” gave the best possible response, resonated around the world in the days that followed.

Mr Burnham, whose mayoral responsibilities include those of the former police and crime commissioner, did not shy away from venting his anger at US officials who leaked sensitive details of the Manchester bombing to the New York Times, which published pictures of the time scene and named Abedi.

A panellist on the BBC’s Question Time last night, Mr Burnham said: “From the minute the attack happened, information was beginning to appear in US newspapers. It’s outrageous. I raised it with the US ambassador earlier in the week. I said ‘this can’t be right.’

“The lead investigator has to control the release of information – the British police – because otherwise you compromise the investigation.  I said that and then it happened again. It is absolutely outrageous what has happened this week. It is wrong. It is arrogant of the Americans and disrespectful to the people of Greater Manchester, most importantly the families of those who dies and those who are injured.

“I don’t want a diplomatic row but this cannot happen again and we need to make that absolutely clear.”

Strong words from the mayor spoken with authority and his complaint went to the very top, taken by by Prime Minister Theresa May and relayed forcefully to US President Donald Trump during a meeting of NATO leaders.

The President described the leaks as “deeply troubling” and said: “”I am asking the Department of Justice and other relevant agencies to launch a complete review of this matter, and if appropriate, the culprit should be prosecuted to the fullest extent of the law.”

It’s been an assured start but the pressure on the new mayor is unlikely to ease any time soon.