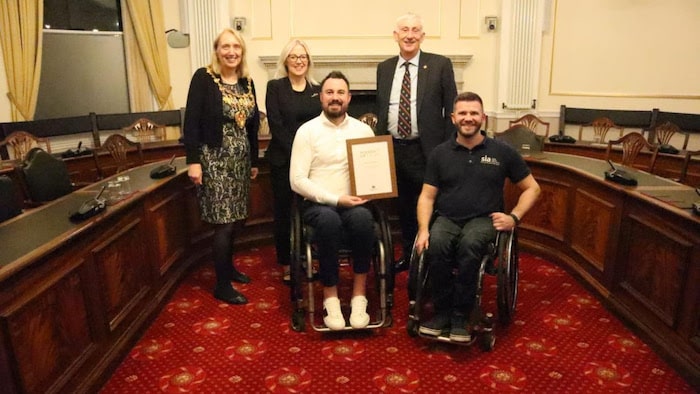 Martin Hibbert, from Chorley,  has been presented with the Prime Minister’s Points of Light award by Chorley MP and Speaker of the House of Commons, Sir Lyndsay Hoyle.

The award is given to outstanding and inspirational volunteers who are making a difference in their community to celebrate, encourage and promote volunteering and the value that it brings to the country.

And Martin truly does represent the best of Manchester.

Martin has been deemed a ‘shining light’ of his home town, since the bombing he has become a motivational speaker and has just finished climbing Mount Kilimanjaro in a specially adapted wheelchair to raise funds for the Spinal Injuries Association.

He has taken up  public speaking with the aim of not only sharing, but inspiring.

He made one of his moving speeches at the Spinal Injuries Association’s annual charity dinner which resulted in a record-breaking sum of money being raised.

And now he hopes to raise £1m for his immense effort of climbing Africa’s tallest mountain in a specially-adapted Bowhead hand bike.

Martin was just metres away from the bomb that killed 22 people in the terror attack at the Manchester Arena in May 2017.

Twenty-two bolts of shrapnel entered Martin’s body at 90mph when the bomb went off at the Ariane Grande concert, with his extensive injuries described as the equivalent of being shot 22 times at point blank range.

One of those pieces of shrapnel had entered through his neck, resulting in two arteries being severed, while a further one was lodged into his spine, slicing part of his spinal cord.

Martin spent six months in hospital and was told he would never walk again, but after meeting Gary Dawson, a support officer from charity Spinal Injuries Association (pictured right on photo), he was determined to keep going and turn an appalling act of terror into a force for good.

“It’s an honour to receive the Points of Light Award for my Kilimanjaro climb.

“It was the hardest thing I’ve ever done, but it is only part of the full story. Because we all have our own mountains to climb every single day, my true ambition is to enable every spinal cord injured person to receive the specialist care and support they need to live the life they choose and reach their full potential.”

Martin visited Chorley Town Hall on Friday night where the Rt Hon Sir Lyndsay Hoyle MP and the Mayor of Chorley Julia Berry presented him with his award.

Martin also took the time to discuss with Sir Lindsay the biggest obstacles that those affected by spinal cord injury face in the UK and what more can be done by politicians to support the community.

“It was fantastic to see Martin setting off on this amazing endeavour to highlight the work of the Spinal Injuries Association and to raise funds for them.

“His bravery and determination are truly inspirational, and he has both my admiration and utmost respect. Martin truly represents Points of Light and everything it stands for.”

So far Martin has raised over £800,000 for the Spinal Injuries Association but is looking to reach his target of £1million.

Let’s help him get over that £1m mark

If you would like to support Martin, you can find out more here.