Martin is celebrating after reaching the 5,895-metre summit - and raising funds for the Spinal Injuries Association in the process 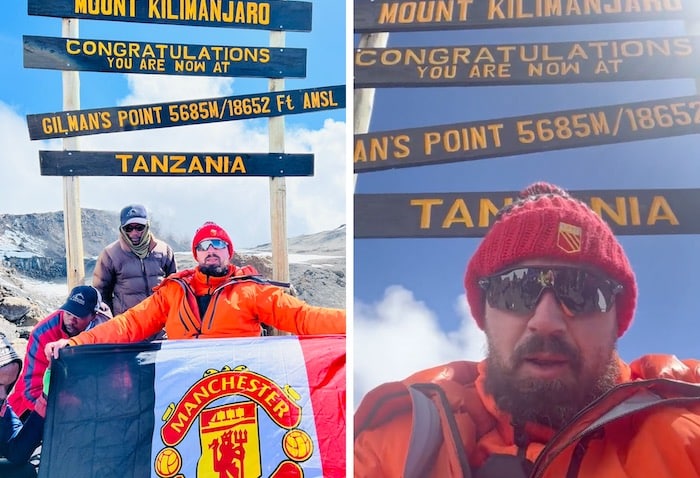 He was the closest survivor of the Manchester Arena bombing which tragically took the lives of 22 people.

“A bolt went straight through me, severed my spinal cord and left me paralysed below the waist,” he says.

“The NHS saved my life, but it was an amazing charity, the Spinal Injuries Association (SIA) who gave me the hope, confidence and practical skills to start again.”

So he set himself an extraordinary challenge – a charity climb up Mount Kilimanjaro.

“I’m not going to allow this injury to dictate who I am,” he said.

Martin prepared for more than two years to scale Africa’s highest mountain, using a specially-adapted wheelchair, with the team who helped save his life.

Now, he is celebrating after reaching the 5,895-metre summit – and raising funds for the Spinal Injuries Association in the process.

Only 65% of climbers make it to the summit of Africa’s highest peak – but now Martin has achieved it in a wheelchair, with the help of his support team.

“Five years on from when I could hardly move in hospital, and here I am five years later at the top of Kilimanjaro,” he said in a video he posted on Twitter.

“Amazing feeling. Dream, believe, achieve is something I always say to people – and who would have thought when I was told five years ago that I’d never walk again that here I would be at the top of Kilimanjaro – the second paraplegic, I believe, to do it.

It took blood, seat and tears, but, with your support, Martin and the @SIA_Mountain made it to the top of the tallest mountain in Africa, #Kilimanjaro!🗻

Please, help the team in their biggest goal of raising £1 million for SIA at: https://t.co/nBNPzYSGZx pic.twitter.com/4nVpQXJVP5

Martin said he launched the mission to scale Mount Kilimanjaro as he wanted to “move mountains” for disabled people.

“It’s not just about climbing a mountain, it’s about educating people about what life is like with a spinal injury,” he said.

Now, his goal is to raise £1 million for the Spinal Injuries Association – and he has already raised over half a million.

You can help Martin reach his target by donating here.