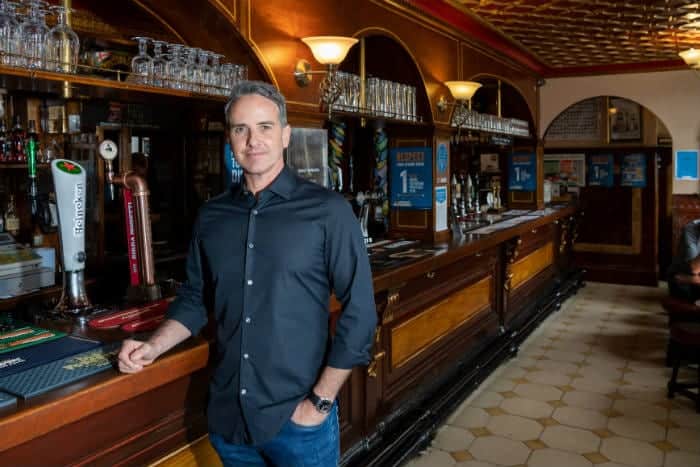 “My concerns go way beyond money and business,” says Dan Borza. “It’s violating the constitutional rights that millions fought and died for.”

Cafe bar owner Dan left his home in a communist Eastern European country [Romania] to get away from state controls and undemocratic laws. “It was never as bad as the UK is now,” he says.

“What’s worse, without any actual scientific data, it’s making us live in fear of f*ck all.”

According to Department of Health officials, the contact-tracing app for England and Wales, which allows people to check in to venues such as pubs and restaurants, has only sent one alert about a coronavirus outbreak in a venue since it was launched two weeks ago, despite being used for millions of check-ins.

The contact tracing App that was launched in England and Wales 2 weeks ago…guess how many alerts have been sent out associated to a hospitality venue:

William Lees-Jones is the managing director of one of JW Lees, one of Manchester’s original family breweries, which has an estate of over 140 pubs, inns and hotels across the north-west and beyond.

“What a shambles,” he says. “Rishi Sunak is about to make an announcement that’s already been leaked to the media.

“Week 41 and [according to stats from Public Health England] hospitality has fallen again this week to 3% of infections, and the PHE stats are not from the pub sector, so it’s time to see sense and do a U-turn on closures.”

What are the facts?

Greater Manchester Mayor, Andy Burnham, told Question Time that the government needs to support businesses with “a full furlough scheme” if localised lockdowns continue. “It does feel increasingly to people that we’re being treated with contempt in the North of England.”

Ministers have been accused of justifying pub closures with “cobbled together” statistics including a three-month-old survey carried out in the US.

One Tory MP told The Telegraph: “It was very clear to everyone on the call that they had cobbled together this data as a retrospective attempt to justify closing pubs.

“Given what we know from the official NHS figures, why are they quoting data from a tiny survey carried out in America?? It’s just meaningless.

“No-one could make any sense of how these figures were put together. If they are so convinced they are right, they should publish them so everyone can see them.”

He believes the current situation is an existential threat to the £70 billion sector and is calling on the government to urgently introduce a sector-specific support package if it is to survive.

The warning comes as the Night Time Industries Association found nearly half of businesses in the night time economy will be making over 60 per cent of their workforce redundant as a result of the Winter Economy Plan and current restrictions.

“With safety as a priority, we are ready to work with the government, but the confusion and arrogant ignorance about the importance of this £70 billion sector have to end,” says Sacha, who is also co-founder of Parklife, the UK’s largest metropolitan festival, and The Warehouse Project music events.

“The sector will be key as we move towards economic recovery, but it is imperative that they act and invest now to ensure there is an economy to go back to.”

So, what is Manchester doing about the new measures?

Sacha’s urgent proposals to the government for the survival of the sector include a sector-specific extension of the furlough scheme for venues which cannot operate at full capacity, or which remain fully closed and are not eligible for the Job Support Scheme; cancellation of the current 10pm curfew; and extra financial support for businesses affected by or ordered to close during local lockdowns.

“The Chancellor’s Winter Economy Plan is of little use to this sector,” says Sasha. “The new Job Support Scheme relies on a business being open to being classed as viable, and yet thousands of venues remain partially or fully closed. In hospitality alone, there are 900,000 workers still on furlough, and for many operators, it will be easier to remove these individuals from payrolls completely than go under. The furlough scheme must be extended for this sector to avoid a complete collapse and a tidal wave of redundancies over the next three weeks.

“The 10 pm curfew has been a reckless move, driving crowds out of venues at the same time and into supermarkets, shops and onto public transport. The hospitality sector has spent hundreds of thousands installing measures allowing people to socialise safely, and these steps have been all but ignored. The curfew must be lifted, not only for the survival of the venues who are 50-60 per cent down on takings but in the foremost for public safety.”

He is also urging the government to introduce further financial support for businesses affected by local lockdowns, including an increase to the local lockdown grants (currently £1,500 every three weeks), a further extension to the business rate holiday for 2021, and a package of support for freelancers who are ineligible for government support.

And he wants the government to publish scientific data and modelling to ensure we all understand and can back the difficult choices being made.

“Only then can we come together as one to rebuild Britain as the global cultural capital we are famous for.”

How you can help

First to close and still with no clue as to when it can open, the hospitality industry has lost the summer profits which allow it to get through the first quarter of next year. Even if businesses are allowed to open in December, one month’s profit won’t be enough to keep them open in 2021. They need help.

You can give financial support to the events and hospitality industry by signing this petition. The government only responds to petitions that get more than 10,000 signatures. It will not be considered for debate in Parliament unless it reaches that target.