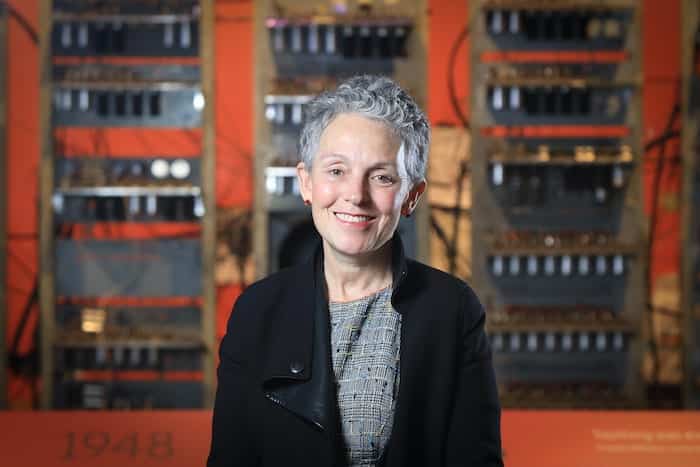 Withington-born Sally MacDonald became director of the Museum four years ago, having started her career as an assistant at Manchester Art Gallery. She has also been the head  of several prestigious museums and galleries in London.

Sally is leading the Museum forward in a multi-million pound project to restore the incredible site, and from next year will be opening new galleries to ensure it’s a beacon for contemporary science exhibitions and experiences for years to come.

I’ve been visiting museums on and off as a kid. I used to go to the Manchester Museum, which had a great art club on a Saturday, and my art teaching at school was not good at all. But people in that art club taught me how to draw. From there I started feeling that museums were good places where you could come across cool and interesting stuff. After finishing university, I worked as a volunteer at the city art gallery and eventually carried on working there.

I would have to say my mum. She was someone that I could never really live up to, but she was an amazing person. She was somebody who always had time for people and got a lot of fun out of life. That’s what I aspire to be.

Professionally I’ve been able to work on some great museum projects and some great exhibitions. I set up a whole museum service in the early 90s that was great. But when you look back on your life, I’ve got two sons who, although they give me grief, are probably the thing I’m the proudest of.

There is no such thing. One of the great things about my job is that it’s varied. This morning we’ve been talking about programming, exhibitions and a science festival that are coming up. We had a meeting about the big gallery project that we are doing, meeting any potential sponsors. Each day is different, which is one of the things I love about the place.

I like to swim and going for walks with my husband. I like getting outdoors. If I could swim outdoors, that would be even better. However, around Manchester, there aren’t many outdoor places that I like going for a swim. But I need to get outside even when it’s raining, which it often is.

Always trust your instincts. A couple of people have said that to me and as I get older, I see the value of this more and more.

When I was very little, I used to want to be somebody who fixes the roads, because I used to really like the smell of tar. Later on I fancied being a nurse, because my parents were medical. I don’t think that I would’ve been good at either of those jobs.

I used to be a big glam rock fan in the 70s. On one occasion during a concert, I touched Gary Glitter – not something you could be too confident talking about these days.

Blue if I had to choose, but I’m not a big sports fan. I know that is sacrilege in Manchester.

It’s hard to get down to three. The first place is on Whitworth Street. There is a beautiful gate and there is a great circle of metal on the top of it. I walk past the gate every day, which gives me a lift. The second place is the Castlefield Basin and the Bridgewater Canal. The canal is special to me as I got married in Manchester and we had our wedding lunch on the Bridgewater Canal. The third place is the Science and Industry Museum because it’s just such a unique collection of buildings, with so many wonderful activities going on all the time.

It’s between homelessness and child poverty, as both are shockingly high.

The people and the sense of humour. I lived in London for 30 years, and what I really missed is the fact that people that you don’t know will have a laugh with you anywhere, in the shop or at the bus stop. It is good to be working back here in Manchester.

Some late-night, grown-up events are taking place at the Science and Industry Museum in the next few weeks. On Wednesday 27th November, the Museum will burst with solar science, poetry, music, crafts, talks, an inflatable planetarium, while visitors get the opportunity to grab a drink from the bar before entering the Museum’s popular The Sun exhibition. On Tuesday 10 December, TV presenter Rick Edwards and editor of The New Scientist journal, Dr Michael Brooks, present a live edition of the Science(ish) Podcast, an increasingly popular look at the science lurking within the scripts of famous films.