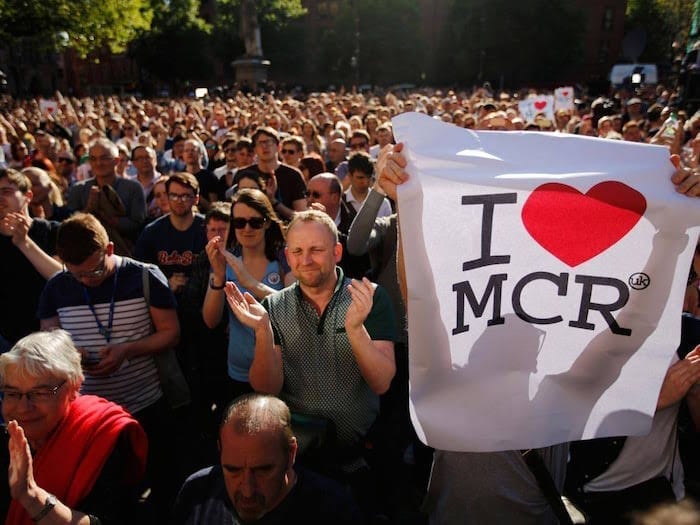 An advisory group of civic and business leaders was established last summer to advise on a permanent memorial to the victims of the Arena attack on 22 May 2017 last year.

In the meantime, plans to commemorate the first anniversary of the terror attack have been announced.

A programme of events will pay tribute to the 22 people who lost their lives in the attack, those who were injured and first responders.

A civic memorial service to reflect on the events of that terrible day and remember loved ones will be held at Manchester Cathedral on Tuesday 22 May from 2-3pm.

Due to space limitations, this will be attended by an invited congregation including the families of those who lost their lives, those injured, first responders, civic leaders and senior national figures.

The service will shown on a big screen in Cathedral Gardens and at York Minster, Liverpool Metropolitan Cathedral and Glasgow Cathedral.

In Manchester Together – With One Voice, choirs will come together in song to share the spirit of solidarity and remember those affected by the Arena attack. It will end with communal singing which will be broadcast live on Radio Manchester.

Choirs and singing groups from Greater Manchester and beyond are invited to perform at the event and can register their interest here.

From 22 May to 26 May inclusive, song lyrics will be projected onto St Ann’s Church and other parts of St Ann’s Square for There Is A Light. The council is inviting people to suggest lyrics – or a single line from a song – which have a personal resonance for them. More information here.

Families of the 22 who lost their lives in the attack and others seriously hurt, physically or psychologically, are being kept informed of plans as they develop and the families have been invited to choose lyrics which are close to their hearts.

Manchester city council leader Sir Richard Leese said: “Music is in Manchester’s soul and it is only fitting that it should play a central part in marking what will be an emotional anniversary. We saw in the aftermath of the 22 May attack how spontaneous song captured the city’s spirit, its solidarity and refusal to give in to hatred.

“Coming together in song will once again demonstrate that remarkable sense of togetherness and we invite choirs who can help lead us in raising our voices to get in touch. It is a fitting way for us to honour those who went full of joy to a music concert but never came back, or saw their lives changed forever.

“Sharing powerful and poignant lyrics will also underline the city’s defiant spirit and help us collectively reflect on the events of 22 May, 2017 and their aftermath.

“In the words of Tony Walsh’s poem This Is The Place, which resonated with so many people in the dark days after attack, ‘We keep fighting back with Greater Manchester spirit. Northern grit, northern wit in Greater Manchester’s lyrics.’”

A Trees of Hope Trail will give people the opportunity to leave personal messages of hope and support for those affected on trees placed at key locations around the city centre. More details will be announced in due course.