Is Manchester really the footballing powerhouse it thinks it is? 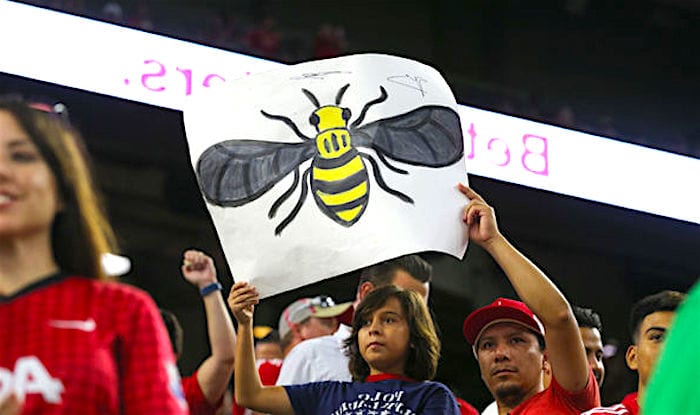 When Jose and Pep both arrived in Manchester in the same summer, the hype began. The press were keen to build up the return of the old rivalry between these one-time friends. And then it didn’t really happen.

City flew out the blocks last season and looked like a pure Pep team before crumbling, unable to give him what he really wanted. United may have won two trophies, but the challenge for the Premier League title was never really there.

It looks like the battle is well and truly on this season. It looks like City are the team to beat, with United not far behind.

But according to the Ballon d’Or nominations announced this week, Manchester may not be the footballing powerhouse we like to think it is. Maybe all eyes aren’t on Manchester.

Only two players from City or United were included in the 30-man shortlist – Kevin De Bruyne and David de Gea.

Both are hugely deserving of their places in the list.

Dave the Save has consistently been one of United’s top performers in his time at the club, winning the player of the year award every season bar one since Fergie retired. De Bruyne has been in sparkling form already this season, and has continually shown his quality since he came back to the UK from Germany.

But let’s put this in context. Chelsea have as many players on the list as the two Manchester clubs combined (Eden Hazard and N’Golo Kante), Tottenham have one (Harry Kane), and even Liverpool have one (Philippe Coutinho). Real Madrid have seven and PSG have three. Even Edin Dzeko made the list as Serie A’s top scorer last season.

This makes the Manchester clubs look pretty average on the world stage. No room for Paul Pogba, Sergio Aguero, Romelu Lukaku, David Silva, Gabriel Jesus or Marcus Rashford. In fairness to the latter two, they’re on the list for the Golden Boy award and have realistic aspirations to be on the Ballon d’Or shortlist next time round.

There is a school of thought that, when it comes to the big prizes and personal accolades in world football, Premier League and English players are often overlooked. The last Premier League winner was Ronaldo in 2008.

On these grounds, you could probably argue that the likes of Lukaku and Benjamin Mendy are deserving of a place on the list, whilst it’s questionable whether the likes of Radamel Falcao and Karim Benzema really are.

The fact remains, however, that both Manchester clubs spend so much money every summer but still can’t really boast of being anywhere near the European elite.

One of United’s fans’ most popular chants in the last couple of seasons has been about the fact that Jose has United playing the way we want to see again. Nothing about actually winning leagues or European Cups. This is testament to how big the post-Fergie fall from grace has been.

All City had to celebrate last season was finishing in the top four. The Champions League defeat to Monaco was disastrous.

So it’s probably time to take a bit of a step back and question our place in the footballing world. All eyes remain on Madrid, Barcelona, and now Paris. Turin and Munich also have a claim to that, too.

We may have two of the best managers in the world but, according to the rest of the world, we don’t have the players.

Hopefully the Premier League trophy will come back up to Manchester this season. But it’s only with sustained challenge at European glory that we’ll once again become the centre of the footballing world.

That looks a long way off yet.