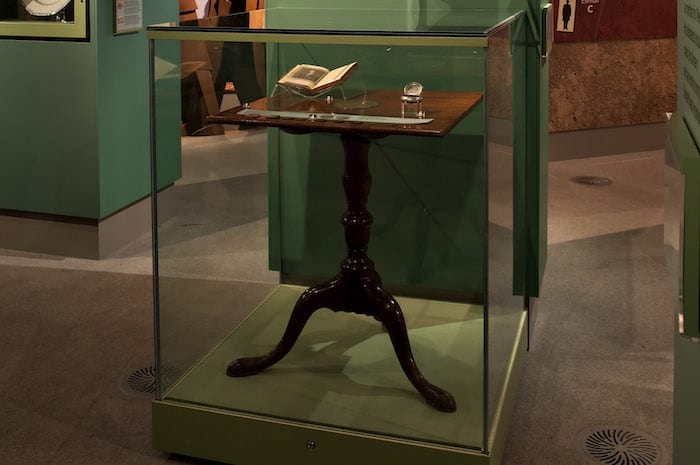 Manchester has a reputation as a city with a long history of political protest – Peterloo, the Chartists, the anti-Corn Law League, the Suffragettes, countless contemporary demonstrations – and home to a succession of radical figures from Richard Cobden to Christabel Pankhurst, from Friedrich Engels to Ellen Wilkinson.

This tradition of opposition to the existing order arose because here conditions were worse: more impoverished and more oppressive, so the voices were longer and louder.

So it is fitting that Manchester is the home of a national museum of political activity – the People’s History Museum in Spinningfields on the corner of Bridge Street and the conveniently named Left Bank.

Among the many memorable artefacts is the very desk where one of the most important political books ever written in England was crafted: Rights of Man by Tom Paine, published in 1791.

Rights of Man advocated political rights, the vote for all men over 21, family allowances, old age pensions, maternity grants and the abolition of the House of Lords.

The book was so hot no publisher would touch it, initially, and once it had appeared Paine went into hiding in the West End of London.

He spent much time in France around the time of the revolution and served in France’s National Convention as one of only two foreigners, although later he was lucky to escape the guillotine; his jailer failed to see the chalk mark outside his cell that meant execution.

Indeed much of Rights of Man was a defence of the French Revolution and his attacks on the revolution’s main critic, Edmund Burke, led to his trial and conviction in his absence for seditious libel.

One of the most memorable passages is Paine’s critique of the divine right of kings to rule, with reference to the first Frenchman to become king of England.

“A French bastard [William the conqueror] arriving with armed banditti and establishing himself [as] the king of England against the consent of the natives is in plain terms a very paltry rascally original and certainly has no divinity in it.”

Paine was energetic and exploratory. He spent much time in America where in 1776 he had published Common Sense, the first pamphlet to advocate American independence. His friends numbered Washington and Jefferson. One of his many astonishing achievements was to create the very name the United States of America.

He later returned to the New World where died in poverty on 8 June 1809, shunned by the natives on account of his atheism, buried on his property in New Rochelle. On his deathbed, his doctor asked him if he wished to accept Jesus Christ. “I have no wish to believe on that subject,” he replied bravely before expiring.

But that wasn’t the end of his story. William Cobbett, a campaigning journalist of the next generation, who later stood unsuccessfully for election as Manchester’s first MP in 1832, disinterred Paine, cleaned up his bones, and brought them back to England for a speaking tour in the autumn of 1819, just after the Peterloo Massacre.

When Cobbett arrived at Liverpool, his luggage was taken to the custom house to be inspected and when the trunk was opened, Cobbett cried out: “Here are the bones of the late Thos. Paine!”

Cobbett intended bringing the subversive bones to Manchester for a public meeting, but with the horrors of Peterloo still fresh, soldiers boarded his coach at Irlam and ordered him or the bones off.

What happened to Thomas Paine’s bones? Cobbett’s friend Benjamin Tilly recalled how on “Tuesday 7 January 1833 I went to 11 Bolt Court, Fleet Street, and there I saw, at the house of Mr. Cobbett, the remains of Mr. Thomas Paine, when I procured some of his hair, and from his skull I took a portion of his brain, which had become hard, and which is almost perfectly black.”

The People’s History Museum has his desk but not his bones.