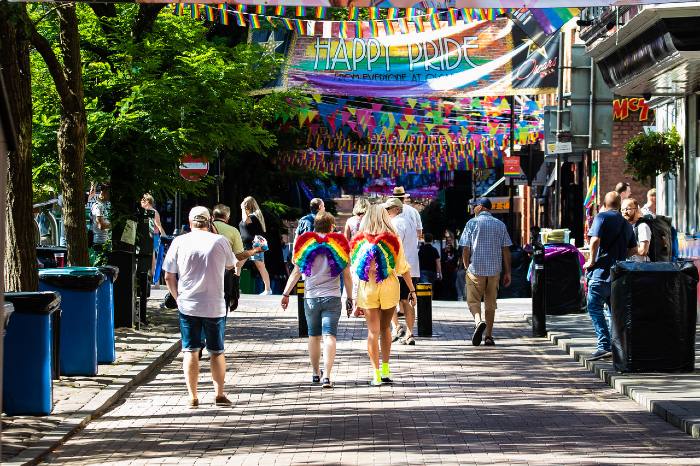 Celebrating the theme for the 2021 Manchester Pride Festival as the Garden Of Freedom, the LGBTQ+ charity is aiming to bring LGBTQ+ people back together to stand together and to push forward in the fight for freedom.

Taking place from the 27th-30th August, Superbia will showcase diverse creative LGBTQ+ projects across Greater Manchester including a lineup of free music, dance, film, poetry and performance events. The festival will showcase and celebrate some of Manchester’s incomparable LGBTQ+ talent.

What’s in the Superbia lineup?

On Sunday 29 August, Superbia will offer a jam-packed schedule of creative projects.

Starting with The Untold Orchestra which will play hits by David Bowie, the performance will start at 2pm and end at 3pm with the location on the rooftop at Seesaw, Princess Street, Manchester. The musical group features dancer Finley Letchford-Dobbs alongside six musicians as they perform extracts from TUO’s Bowie show.

Following this is the Superbia Cinema, which will showcase LGBTQ+ short films with a focus on music and dance, and an intro from one of the filmmakers. The showings will start at 3pm and end at 4pm with all showings at Ducie Street Warehouse.

To end the day, the Pride Dance will start at 4pm and end at 5pm at Ducie Street Warehouse. The finale will include Aria Scere-Jacobs and Joshua Hubbard performing solo dance work in collaboration with DJs Kiss Me Again. Joshua Hubbard is a homegrown international award-winning contemporary artist originating from Oldham. He has worked with famous names including Charli XCX, Brooke Candy, Roisin Murphy, Elton John, Hercules and Love affair.

What else is happening on the bank holiday weekend?

Heading into Monday 30th August, the programme will focus on more creative performances.

Returning for a second day, the Superbia Cinema will again feature LGBTQ+ short films but will this time include a Q&A from the filmmaker, Jemma O’Brien. The films and Q&A will run from 12pm-6pm at Ducie Street Warehouse.

Out in Chorlton, a nature walk and outside performance piece by Juliet Davis will take place in South Manchester. From 3pm at Chorlton Water Park, guests are free to join the event, which forms part of the Superbia Spotlights commission.

Running from 12th August and available to join from morning until night, is the Dial-A-Pride-Poem with `Maya Chowdry, which offers a selection of special readings for guests to enjoy via phone.

Dial-A-Pride-Poem, the free to join phone line, offers beautiful musings by spoken word artist Maya, on seduction by wild violets, and why nature is not outraged by sex-switching.

Callers can simply dial the number and hear a randomly selected work, recited just for them.

In the run up to the weekend of celebrations, Manchester Pride will be partnering with Kampus, who will be showcasing the ‘Freedom, Living Portrait Exhibition’ from Thursday 26 August.

The meaningful audio-visual art exhibition of ‘living portraits’, will be displayed in and around the Kampus garden for two weeks over the Pride Weekend.

The exhibition will comprise of ten beautiful portraits of people from the LGBTQ+ community, which will be accompanied by an audio recording of their story.

Alongside the exhibition, She Choir, the collaborative choir for women and non-binary people over the age of 18 will be performing in the Kampus garden.

How do you get tickets?

Tickets for the Superbia weekend can be found here: