Manchester Gin, the drink that’s making a big splash in the city

If you’re struggling to think of your favourite small-batch gin distilleries, it’s probably because before 2009 there weren’t any. Only a few large distillers like Beefeater were in the game, but thanks to London distillery Sipsmiths, the legislation changed to allow small-batch producers to operate legally.

Since that pivotal moment, there’s been a huge increase in the number of gin distilleries. One of them is our very own Manchester Gin. Founders Jennie Wiggins and Seb Heeley are both in full-time jobs who were brought together by their mutual love of the spirit and decided to make their own.

“It’s the reason we’re together,” says Seb. “I ended up as a bit of a fifth wheel with my two mates and as Jen was by herself at the time, I thought I’d go and talk to her. After asking what she was drinking, we spent a good part of the night berating the mainstream gin selection in the bar. That was nearly four years ago. Now we have a distillery.”

If that sounds a bit spur of the moment, that’s because it is. And it’s indicative of their whole story. Some eight months ago, the couple learnt the basics of distillation and quickly started to use their ingenuity to combat the problems of making gin on such a small scale.

“We wanted to make a very pure and clear gin,” says Jennie, “but to achieve that you need the spirit to touch as much copper as possible. With a small kit that can be a problem.” To address this, they made what they call a “copper cloud” out of extra copper to filter out the impurities.

Sat in Common Bar tasting the final product, I can safely say they’ve pulled it off. This is no London Gin. It’s a Manchester Gin. Seb and Jen have combined their love of sweetness with the northern flavour of dandelion and burdock to create an incredibly rounded, smooth and almost viscous-like spirit that slips down gently.

“For me, I wanted to be able to drink it neat,” explains Seb. “I hate bitterness, so we added ground almond along with the junipers and coriander to create an almost milky aftertaste. And as dandelion and burdock grows alongside canals, we thought it would be a nice northern touch as well as giving the gin an added sweetness.” 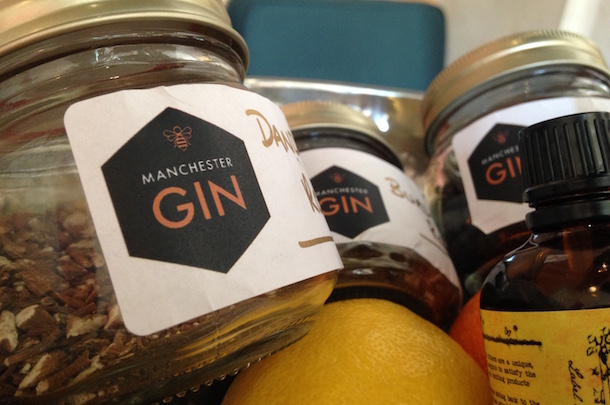 Story is a big part here. If you find a bottle of Manchester Gin – which you can now do at Common, Lunya, Cottonopolis and an increasing number of city centre bars – you may find inscribed on the back Big P, Little P or Pip, referring to whether Seb, Jennie or both of them distilled it. These personalised touches along with strong branding and a quality product have created quite a splash in the city, and they’re only on their third batch.

They are working round the clock to bring their vision to life. They make the gin every Sunday, a process which takes some 16 hours. Their launch at Common is a celebration of their courage more than anything. Personal friend Jade ‘The Ginstigator’ Paterson created four sensational cocktails for the event which featured plenty of gin as well as quality tonic from Double Dutch.

As for the future, the recipe looks like it’s staying the same with a few minor tweaks. I hear, however, they’ll be bringing out an Old Tom sometime before Christmas. Be very excited for that when it happens.