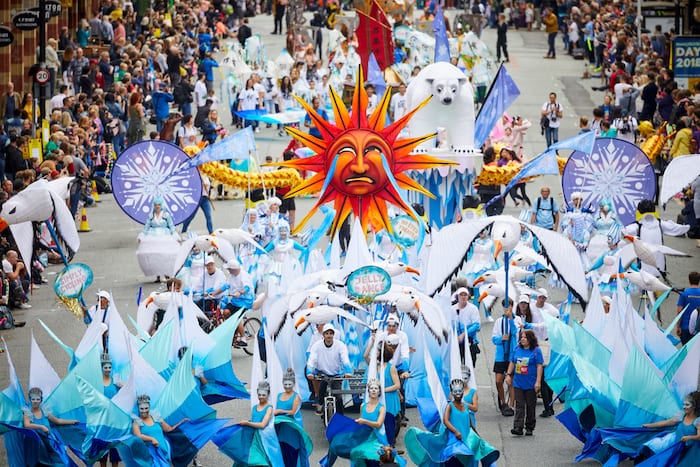 Manchester Day has brought to light the very best that our city has to offer since 2009.

Taking to the city centre streets, the free family day out – which celebrates Manchester and its proud residents – is back and bigger than ever for its 10th anniversary.

Returning on Sunday 23rd June, this year’s theme 10 Out Of 10 aims to champion Manchester’s people, cultures and communities as well as the city’s biggest achievements in industry, science, music, fashion, education and sport.

Kicking off at midday, you are invited to indulge in an explosion of colours, sounds and culture as various community groups join in the Manchester Day parade – the centrepiece of this mighty day of Manc love and celebration.

Marvel as music, dance and outdoor theatre spill out over the city for an afternoon of family entertainment with festivities carrying on until 6pm.

Top marks will be awarded to the city as Manchester Airport returns as principal sponsor, alongside continued support from Arts Council England, ensuring an unforgettable day of celebrating Manchester’s heritage.

And award-winning arts organisation Walk the Plank are back at the helm with over 30 artists and 1,500 participants and volunteers from local areas helping to bring Manchester Day to life.

Feast your eyes on amazing artworks, costumes and props while digging into a variety of food and drink vendors, which will be announced in the coming weeks.

Without volunteers, Manchester Day wouldn’t be the huge success that it is. Be a part of creating the mighty Manc blowout and do your bit for the one day shindig by signing up to a range of volunteering opportunities.

“Manchester Day always promises to be the biggest, most colourful and most creative summer celebration in the city’s packed events calendar,” said Cllr Pat Karney, head of Manchester Day.

“And this year it’s certain to be even more extraordinary, as we’re celebrating 10 incredible years of this big day out in the city.

“Manchester Day is one of those events you just can’t afford to miss so put it in your diary now and join in the countdown with the generations of families and thousands of Mancunians who will be joining together to celebrate the city in the party of the decade.”