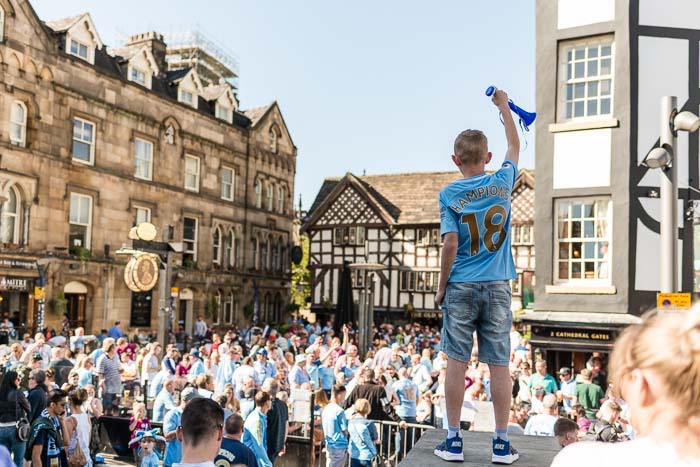 Manchester City continue to celebrate their historic treble-winning season – and tonight the club’s fans can join in, too.

City’s players and coaching staff will all head onto an open-top bus which will snake through the city centre on Monday night to show off their impressive silverware from their Premier League title win, Carabao Cup and FA Cup victories.

Their domestic clean sweep has landed the current team in the history books, so the victory celebrations are particularly sweet this year, and will start with a stage show outside Manchester Cathedral from 5pm.

And for the 2019 celebrations, there will be a new route – with Pep Guardiola and his team starting their open top bus journey from Albert Square at 6pm, heading along Peter Street, onto Deansgate ending up at Manchester Cathedral, where a special stage will be set up.

Nick Cushing’s side, who won the the FA Women’s Cup and the Continental Cup, will also be parading their silverware on what looks set to be a special evening in Manchester.

For anyone wishing to watch, it is on a non-ticketed, first come first served basis.

Sir Richard Leese, Leader of Manchester City Council, said: “Huge congratulations to Manchester City on a remarkable season. Some things don’t change with City – fans like me are still on a knife edge – but that win shows a brilliant team at their absolute best. The parade next week will be a fitting end to a nail biting campaign.

“City fan or not, all Mancunians can be proud of the achievement that has brought the Premier League title back to Manchester for a second successive year – a feat rarely achieved outside of this city.

“Manchester is a name at the very top of world football and the city’s success spreads our name across the globe, helping to attract investment and supports the continued economic growth of our city.”