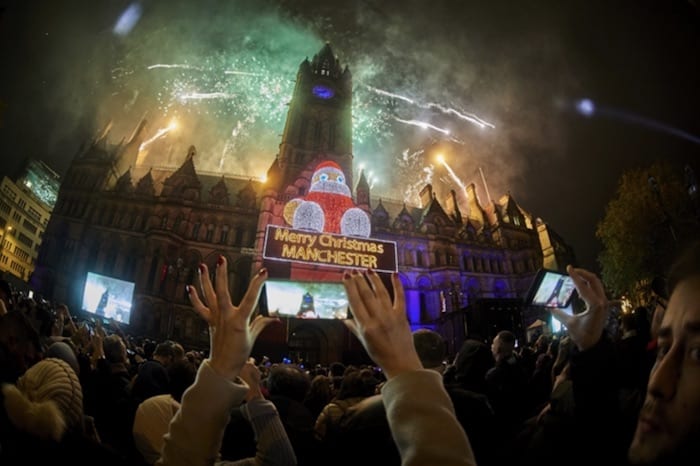 The countdown to Christmas officially began last night when Manchester’s city centre lights were switched on.

The free event saw thousands of Christmas-loving Mancunians squeeze into Albert Square for the occasion under the watchful eye of the Town Hall’s most famous resident – no, not Pat Karney, but the six-tonne Santa (aka Zippy), who was lit up in all his festive glory on top of the Town Hall for the last time for at least the next four years.

In true Mancunian style, the organisers didn’t take the job of making this the biggest and best Christmas Lights switch-on ever lightly.

In charge of pushing the famous festive button was international DJ Jonas Blue, who performed Polaroid, his recent collaboration with One Direction’s Liam Payne and country singer Lennon Stella, stopping partway through his set to begin the festive countdown.

Joining him in entertaining the thousands lining the streets around the Town Hall was Max George, the former boyband singer who shot to fame as a member of The Wanted and has since embarked on a solo career.

Max broke out a medley of hits including Barcelona and some old school The Wanted classics for good measure.

“I’ve been coming here since I was a kid and I’m only from down the road – so it was a no brainer for me when they asked,” Max told us. “I turned the lights on with The Wanted a few years ago and it was a mint night so to be doing it on my own is awesome.”

Although Max now lives across the pond in the States, he told us Manchester is still special to him.

“Everybody seems to look out for each other in this city. There’s a warm feeling in Manchester. I live in the States now and I’ve got a lot of friends that come over to Manchester and they all think the people of Manchester are great – all really engaging and interested in being friendly, so that’s just what does it for me.

“I love Christmas – I always do the same thing every year. I go to my local pub on Christmas eve, then I stay at my mum’s house and then go and have Christmas dinner with my nan.

Zippy is in his rightful place & the Christmas lights are now on! Let the contdown to Xmas begin 🎅 pic.twitter.com/B2QGHemynE

“Spending time with family is what Christmas is all about. My mum’s here supporting me tonight. She’s one of nine so I’ve got a big family. They’re all here watching the switch on, there’s about 50 of them all together so it’s lovely to have all of them here with me.”

Mike Toolan, who hosted last night’s proceedings alongside radio co-presenter Kelly Pegg, told us he was honoured to be asked to help turn on the Christmas lights again this year.

“I think this is the 12th time I’ve been asked to do it and every time it’s terrifying and beyond exciting,” said Mike.

“I don’t think any other city does Christmas quite the way Manchester does and the lights going on is the shotgun that starts the race. The fireworks put Disneyland to shame and the standard of acts – Jonas Blue and Max George – were top notch.”

A host of support acts included the phenomenal Witches of Oz from Wicked, which returns to the Palace Theatre for the final time this Christmas.

Joining the host of stars on stage was Ryan Heenan, currently appearing in the theatre production of David Walliams hit novel Billionaire Boy, the cast of Mel Brooks comedy The Producers at The Royal Exchange, and Harry Potter and Fast Show star Mark Williams and Coronation Street legend Vicky Entwistle (Janice Battersby) from The Lowry’s production of Dr Dolittle the Musical.

Short but sweet, the show started at 7:30pm and finished up an hour later with a 10-minute firework display to end all firework displays. The spectacular show created an eruption of colour on Manchester’s skyline and could be seen all around the city, truly marking the beginning for the festive period.

Now that the lights have been turned on – the famous Christmas markets are set to open on Friday. So get ready to break out the festive jumpers and prepare for a cheese and mulled wine overload.