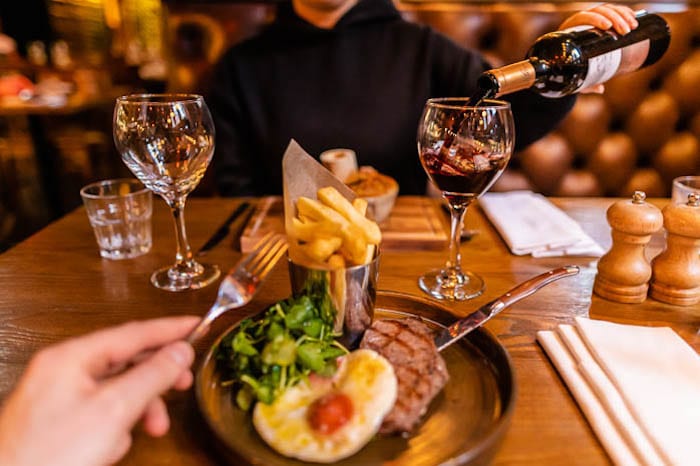 Manchester’s Chop Houses have launched a seasonal new menu that’s full of the joys of spring.

It’s also full of surprises, as we discovered during a sneak preview tasting session at The Albert Square Chop House.

Executive chef Lee Ferguson’s new dishes are full of the hearty, robust flavours we’ve come to expect from the Manchester Chop Houses. But there’s lightness and refinement here, too, as well as a simply spectacular vegan dish. 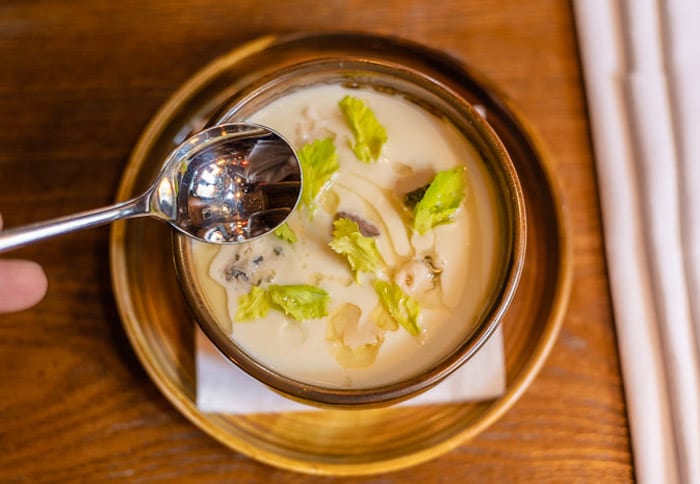 There are some sophisticated fishy options when it comes to starters, too.

Potted Port of Lancaster smoked mackerel is served with celeriac and grain mustard slaw and sourdough croutes, perfect with a glass of dry herbaceous sauvignon blanc, crisp and refreshing like a squeeze of lemon. 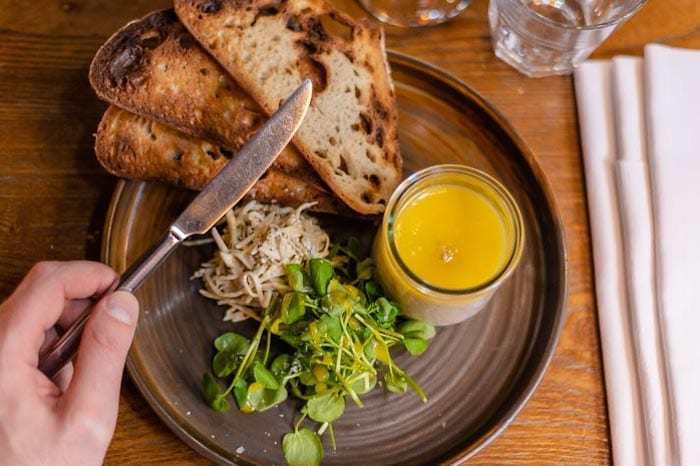 Hand-carved Port of Lancaster smoked Scottish salmon, dry and beautifully smoky, comes with sharp, salty capers, shallots, boiled egg and lemon. Try a glass of chardonnay alongside with its notes of vanilla, apple and pear. 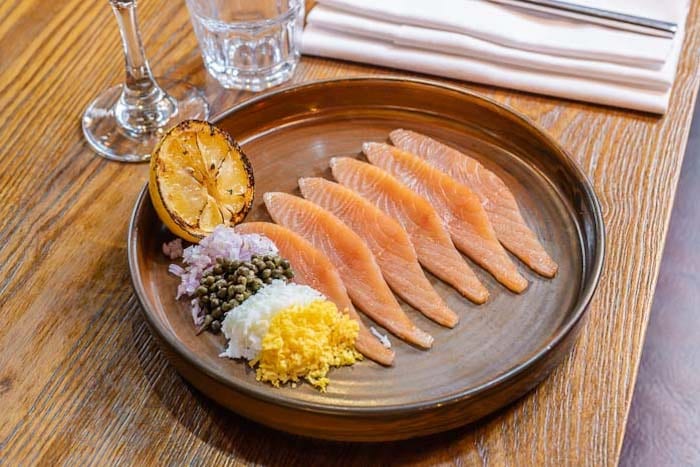 And then there’s a showstopper of a new starter.

Steak tartare, one of the signature dishes of French cuisine for a reason, consists of hand chopped dry-aged beef, classically spiced with a hen’s egg yolk on sourdough toast. There’s roasted bone marrow on the side, ready to be dug out with a knife and spread liberally over the top for an extra beefy treat. The chardonnay’s a clever wine match for this one, too. 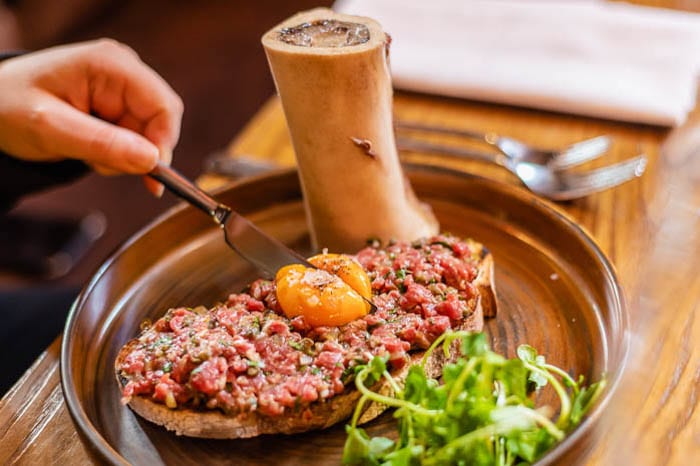 Speaking of wines, there are plenty available by the glass at the Chop Houses, so you don’t have that virtually impossible task of trying to match one bottle to wildly different dishes when you’re in a group. Eleven whites, eleven reds and four dessert wines – as well as sparklers – come by the glass.

On to mains, and meat lovers are spoilt for choice. 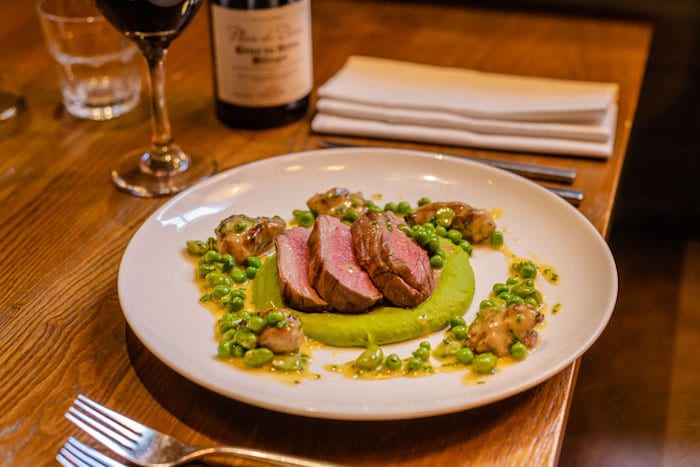 Sweet Cumbrian lamb rump is served pink with seasonal peas, beans and mint, and creamy pan-fried lamb sweetbreads. A glass of cabernet sauvignon is a wine match made in heaven.

Half a devilled Goosnargh chicken sits on a bed of sweetcorn puree with crispy shredded leeks and a jug of spicy sauce on the side. The heat grows confidently throughout.

And a sweet cured bacon chop is just superb, served with buttery champ mash and a fragrant wild garlic and cockle broth. It’s a pretty plate, full of the fresh colours of spring.

Pies are a guaranteed crowd pleaser on any menu. Here, one filled with meltingly tender slow-cooked beef shin, seasonal mushrooms and Guinness is a triumph, almost elevated to the realms of fine dining. 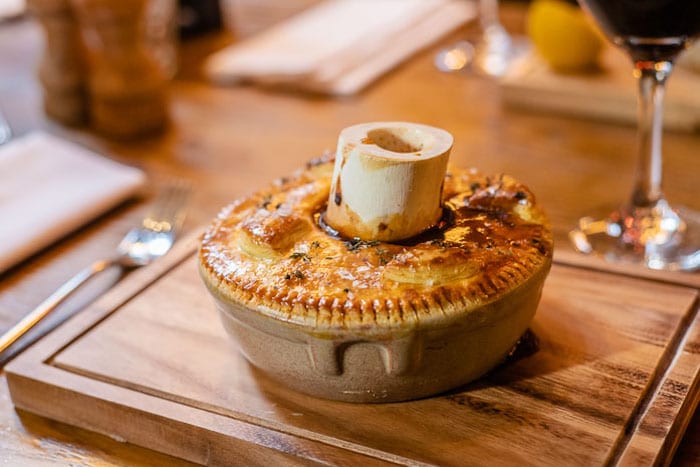 The pastry is golden, and it’s presented with a bone marrow sticking out of the top, Flintstone-style. Gently life out the bone and the marrow slips into the hearty, tarragon-spiked gravy within. It’s practically begging you to dunk a crisp fat chip in. Do it, it’s pure joy.

Then come a couple of surprises. You expect the Chop Houses to deliver when it comes to meat, but they’ve also put the same energy and creativity into the vegetarian and vegan options.

Spring speltotto is a British grain risotto, light and fresh with seasonal peas, beans and baby spinach, dressed with zingy lemon. It’s vegetarian as standard and can easily be made vegan without the cheese.

The real surprise is a vegan mushroom forestiere pudding. It’s a rich steamed suet pudding, lighter than the meat version but just as satisfying, with wilted kale, celeriac puree and the most intense vegetable gravy, deep and glossy and borderline addictive. 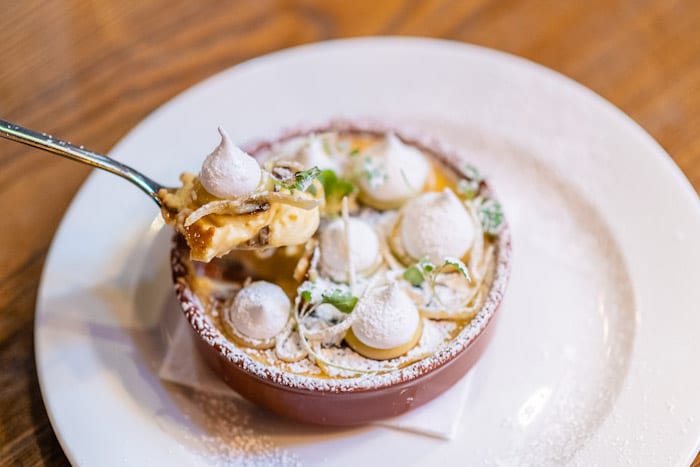 Classic and comforting, yes, but creative and classy, too. Which just about sums up this superb new menu.