You may have noticed that Manchester’s Central Library looks like The Pantheon of Rome. It is so strikingly obvious. But it begs the question: why?

It’s a wonderful a story, linking Manchester with London, Rome and the Pope.

The architect of Manchester Central Library, which opened in 1934, was Emmanuel Vincent Harris, who was also responsible for the adjacent Town Hall Extension (opened 1938).

To find out more, let’s first look inside the library. The first floor reading room is graced by a gorgeous altar-like structure framed by four turquoise Tuscan columns topped by filigree work holding a clock. This is a baldacchino. It is based on the epic baldachin inside St Peter’s Basilica, Rome.

Just as St Peter’s Basilica, Rome, stands above the tomb of St Peter, Manchester Central Library was built above a graveyard, that of St Peter’s Church which stood from 1788 to 1907 outside where the library can now be found.

The baldachin inside Rome St Peter’s Basilica was created out of bronze work removed from the Pantheon, a mile away, by Maffeo Barberini, Pope Urban VIII (quod non fecerunt barbari, fecerunt Barberini: “what the barbarians did not do, the Barberini did”).

The Pope removed the bronze work from the Pantheon in 1634, three hundred years before this library opened. 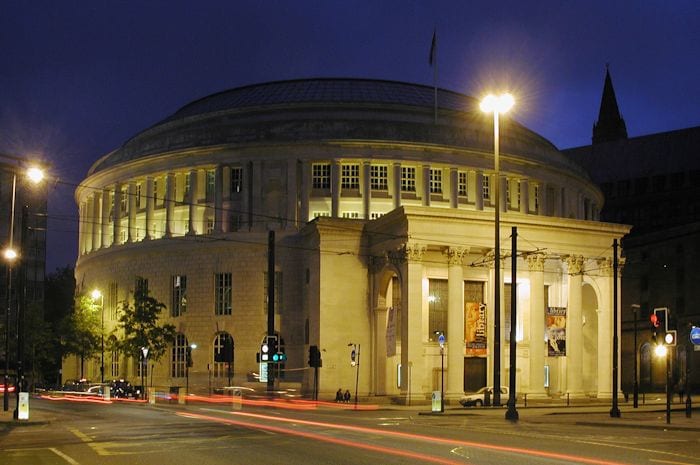 But there are other remarkable links.

St Peter’s Church Manchester was designed by the architect James Wyatt after he had journeyed to Rome to study St Peter’s basilica. Wyatt’s greatest architectural achievement was the Pantheon in London.

This was a grand entertainments centre of 1772 which stood on Oxford Street. It was one of the wonders of the age, the most beautiful edifice in England, according to Robert Adam, its rotunda based on that of St Sophia in Istanbul.

Sadly, London’s Pantheon burned down in 1792. It was replaced by another grand building, which opened in 1834, exactly a hundred years before Manchester Central Library, that became a bazaar, also called the Pantheon.

In the early 1930s plans were announced, with much opposition, to demolish London’s Pantheon. So in Manchester Harris decided to pay tribute to the late Pantheon with his own Pantheon. What an excellent tribute!

Incidentally, next to London Oxford Street’s Pantheon stood a chemist where the so-called “opium eater”, Thomas de Quincey, one of the greatest Manchester-born writers, born only a few hundred yards away from where Central Library now stands, bought his first opium early in the 19th century.